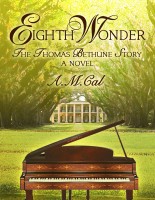 This interview has been viewed 1,011 times.

Published 2016-05-04.
How did your story come about?
When I was in graduate school researching prodigies for my thesis screenplay, I stumbled upon this remarkable slave boy in a crisp black suit, named Blind Tom Wiggins Bethune. He was standing there with his master, in between Beethoven and Mozart. I was riveted. I wanted to know, who was this slave boy in the same book of prodigies as Beethoven, Mozart, Michael Jackson and Stevie Wonder?
What inspires you to get out of bed each day?
I'm inspired by a new opportunity, a new blessing, to live out my God-given purpose, which is to express myself creatively through writing and to share in the positive exchange of humanity.
What is your writing process?
I'm a thinker and a researcher. I often get inspired by learning about the culture, the mores, the passions of the people and times in which I'm writing. That in turn sparks the creative fire to put the images and facts of the times into prose that hopefully captivates the reader. For Eighth Wonder, I had to research autism, blindness, prodigies, and the plantation practices for dealing with disabled slave adults and children, all so I could fully develop Thomas. As a former journalist, research is in my blood, so I studied hundreds of articles about Thomas, known as Blind Tom, his speech patterns, his peculiarities, perceptions of him, while sifting through cultural and social prejudices of the time that may have influenced reports about him. It's quite intense and slow. I wish I was a faster writer.
Do you remember the first story you ever read, and the impact it had on you?
The first story I ever read that I recall having an impact on me was about Moses. I was fascinated, riveted by his courage and the trials and tribulations he went through to deliver the Israeli nation out of Egypt.
How do you approach cover design?
I conceptualized what I wanted. I imagined something elegant that depicted the antebellum era and suggested wealth, status, and refined taste. For me, that was definitely a grand, colonial-styled plantation. I knew I did not want any slaves, or any cotton, only an iconic plantation house and a vintage, period piano. Once I had the concept, I conferred with my graphic designer, conveying my desire for cool, earth tones, and he sketched a few ideas that I liked and ultimately delivered exactly what I'd envisioned.
What book marketing techniques have been most effective for you?
Facebook has been by far the most effective mode of marketing. Initially, direct email worked well and generated a lot of presales, while Facebook has continued to generate buzz and dialogue about the book. Instagram is only good for getting the awareness, while zero sales resulted, the same with Twitter. Facebook and good old fashioned email have been the best marketing avenues.
What motivated you to become an indie author?
I wanted the freedom of expression. Being in the entertainment industry, writers have a very tough uphill battle on a constant basis with other writers, producers, directors, actors, everyone and their dog has an opinion on the story. It's quite amazing the resistance and with this story, I wanted to tell it unencumbered by outside egos and outside forces dictating the story they wanted to tell. I bumped heads at one time with one of the editors for this book who insisted master female slave relationships were essentially illicit love stories and wanted such for the Colonel. I kept scratching my head, the master is the patriarch, the slave without rights, without free will and perhaps in a few minor instances, but mostly they had no choice. It wasn't until the editor saw "12 Years a Slave" and the brutal nature of the relationships, the lack of rights, etc. did the editor apologize and relent. I didn't want every editor, publisher, agent to have to watch a slave movie to get my thought processes for this story.
What is the greatest joy of writing for you?
It's an inexplicable pleasure, that is, when it's good. It gives me a sense of accomplishment, of being able to entertain readers while at the same time, perhaps illuminating some aspect of life that wasn't in their consciousness before. Knowing that I'm bringing joy to peoples lives, also gives me joy.
What are you working on next?
I'm working on another biographical novel about a phenomenal female designer to the one percent who went unknown to the outside world because she was African-American and kept a secret by her wealthy clients.
When you're not writing, how do you spend your time?
I'm usually with friends at dinner, trying to get some kind of workout in, and/or binge watching t.v. and movies.
What are your five favorite books, and why?
Bible, Feast of All Saints, Custom of the Country, The Firm, Disappearing Acts
Where did you grow up, and how did this influence your writing?
I grew up on Beacon HiIl in Seattle, a culturally diverse neighborhood, socioeconomically, educationally, and it was filled with music and racial mixture, and racial tensions, and racial unity, all tugging in a wonderfully interesting way. At home, I was the youngest of six, with two working parents, in a house filled with books and magazines. There were biographies and textbooks from my parents college years, along with my collection of comics and Nancy Drew and the Hardy Boys. All this informs my writing in one way or another, this dichotomy of middle class, working class, the projects just a few blocks away and overflowing mix of cultures.
What do your fans mean to you?
The fans are awesome. It's wonderful to work hard at something, to bring pleasure to others, and to have fans speak highly of the work and appreciate the effort that went into it ...it's fulfilling and rewarding.
Smashwords Interviews are created by the profiled author or publisher. 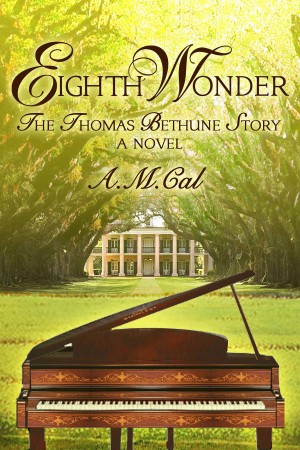 Eighth Wonder: The Thomas Bethune Story by A.M. Cal
You set the price! Words: 120,610. Language: English. Published: December 8, 2015. Categories: Fiction » Historical » USA
It's 1852. A slave born blind, feeble, and left for dead, begins playing Mozart at the age of three. Known throughout the world as Blind Tom, the odd, musical slave and the master who saved him, are caught between forces determined to tear them apart.