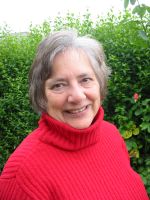 Published 2019-05-31.
Have you always written stories?
Yes I have, because I'm fascinated by people as well as strange places, and the funny things that happen, and I have to turn most things into a story.
Why did you write "Only a Signal Shown"?
I've done a lot of travelling over the years and some friends of mine told me that the letters I wrote to them from far away were much funnier and more entertaining than my fiction, so I took that as a challenge and decided to write a novel that used the places I'd been to, and make a story out of it.
You set an early chapter in Nigeria - was that based on experience?
Yes, I lived in Nigeria for a year, back in 1972-3, with my husband and two small children. In the novel the hero Alec takes his new girlfriend Eleanor out to Nigeria for a holiday to stay with his uncle, who teaches at a university there and lives with his wife and children; Alec's aunt is the only character in the book who is modelled directly on me.
Why did you set a chapter in Copenhagen?
My mother was Danish, and I have very happy memories of visiting Denmark as a child and as an adult, so I made Eleanor in the book half-Danish.
Do you really see this book as a 'long-distance love story' as you keep telling people, or is there more to it than that?
Oh yes much more - it's the story of Eleanor's life, how she struggles to discover what it is she really wants to do, and finally achieves success and public recognition in her sketching. She has to abandon Alec early on because he stands in the way of this, so it's the story of how she gets glimpses over the years of what it might have been like if she'd taken a different route.
Do all your novels have similar themes?
No not at all - they are all very different. My first novel was called "Rubik's Cube", and was written in the 1980s at the time of the Cold War. Far more autobiographical than my later work, it was set in a university city in Wales, amongst a group of Quakers, and it examined different attitudes to the political climate - some people engaged in protest against the cruise missiles which I imagined had come to Wales rather than Greenham Common, others were absorbed in their personal problems such as difficult teenagers, troublesome neighbours and one particular neighbour who starved himself to death.
Wow! Did he really?
Yes, as it happened. I think it's a lot more common than folk realise.
Have you written anything else about Quakers?
Yes, I published a collection of short stories about Quakers, called "Kingfisher Blue".
What is that about?
All the eight stories are very different. The story-tellers range from twenty-two to ninety, of both genders, and the settings range from Canada to the UK to Outer Space.
Which is your personal favourite in the collection?
The last one in the book is called "I Shall Spend My Pension on Brandy", and is about a Quaker approaching ninety, born 1906, who looks back on some of the significant people and events of her life when the Meeting holds a party in celebration. I was surprised the other day when one of the prisoners at Grendon Prison also picked this story as his absolute favourite - he said he would have hugged it if he could!
What inspired you to write the novel "Mathison"?
While I was studying Artificial Intelligence at university, I imagined a computer program which could take in documents and ideas, and give out a whole novel - just as a human novelist does.
Can computers really do that?
Not yet - I'd be out of a job if they could! I set the novel in a linguistics research unit at a university at the end of the twentieth century, because I had worked in such a unit myself, at Cardiff University. The aim of my fictional unit is to write a novel addressed to a baby born in the year 2000, telling her about her ancestors throughout the twentieth century - including her Indian great-grandfather who grew up in Kolkata from 1900, and another great-grandfather, a Jewish dentist who was forced to flee Nazi Germany.
So how do these two very different strands come together?
Oh they both fetch up in Golders Green, of course - where I grew up myself. I based the Indian part on my own father's childhood in Kolkata and his life as a young man in London, and the German Jewish part on a book I read about Quakers in Nazi Germany.
Smashwords Interviews are created by the profiled author or publisher. 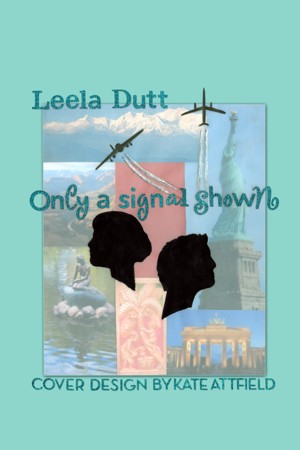 Only a Signal Shown by Leela Dutt
Price: $0.99 USD. Words: 69,280. Language: British English. Published: January 29, 2014. Categories: Fiction » Adventure » Travel, Fiction » Romance » General
a long-distance love story set all over the world, this book appeals to travellers, romantics and those who love a story they can't put down.