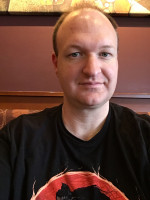 Published 2017-04-04.
What is the greatest joy of writing for you?
The greatest joy I feel as a writer is the sense of surprise I get from my characters. Sure, I know the plot, where it's going to end up and most of how I want to get there.

Then the characters look at what's in store, shake their heads, and say, "I'm not doing that." A to-do list I knew nothing about gets slapped in front of me. "This is what we're doing instead."

Usually, my intended plot ends up where the characters planned to go. The path they use to get there is so much different--and always better.
How do you discover the ebooks you read?
Mostly through recommendation. I found new titles and authors more often when I was working at Barnes & Noble.

Now, I have several independent writer friends who are always pointing out what they're enjoying. Also, my buddy Rocky reads so many books a week that he gives me a few good tips.
Do you remember the first story you ever wrote?
Vaguely.

Keep in mind, the first story I wrote was in Kindergarten. It was a Masters Of The Universe-inspired epic on a scale that no one could ever finish. I had so many ideas for that story that my mom took over writing the words down. I had a picture every few pages too.

Mom still has that book.
Describe your desk
I get out of the house to do at least 80% of my writing, so I don't have a true desk.

When I'm in a coffee shop, or even typing at home, I'll get my laptop open and start playing some appropriate music. It could be something to fit the scene or something to put me on a faster pace. Most of the time, the music comes from my phone, usually, but not always from my Google Play library.

The phone sits three inches from my laptop. My drink--coffee in cold weather, soda when it's warm--sits parallel to the screen and the phone. Behind the laptop, I'll have my sketchbook and/or something I'm using as a refernce.

That sounds a lot more exact than it really is, I promise you.
What motivated you to become an indie author?
There are things one simply cannot do in the world of traditional publishing. For a long time, I submitted Vitamin F to agents, running through most, if not all the genre listings in a Writer's Market. There was plenty of interest in the story, but no one took it.

It wasn't because I couldn't write well. I got rejections because the agents didn't know how to successfully sell what I was writing. That's why I got so many hand-written rejections. Vitamin F wasn't a book that an agent could sell. I don't think it's a book that a publisher or a book store could sell either.

E-books offer a way to shake up reading formats as well. Ten years ago, serials weren't viable. Yes, Stephen King had The Green Mile, but he was also the biggest selling author in the world at the time.

Today's independent publishing can play with story length and style. It doesn't have to bow to the price limits of a printing press ro worry about how many stores will carry it. That puts a lot of stress and demand on the author, but if the desire to publish is there, anyone can do it now.
What is your writing process?
This is the number one thing aobut me that drives my fellow writers crazy.

I don't write in order most of the time.

What I do is I get an idea, maybe even a character or two to go with it. I think about them, pick apart some details. I may even make a few notes.

When another idea comes up and links to the first, that's when the sparks start. If enough of those sparks come together and creatively catch fire, then I'll start writing. The first scene that comes to mind, I write it. If another scene comes to mind, I write that next, making sure to note if it comes before or after.

The process continues until I start to see a path of where things start and end. Once that happens, I start filling in gaps until the characters decide to do something different.
How do you approach cover design?
From my time working in both a bookstore and in a comic book store, I've seen good covers and bad. I've seen how people react to covers when they give the right impression. Or the wrong one.

I think about the tone of the story. If it's dark, I want the cover to say, "There is darkness within."

The image has to give a better clue about what's inside. Anyone can draw fantasy characters battling in front of some unusual backdrop. It takes something more to indicate what's actually going on.

For the first part of Scars Of Shadow, I knew I needed to put the bleeding wall on the cover. Nt only is it unusual, it's evocative. I showed off several drafts of that cover, not just to friends, but total strangers too. Consistently, I got the mood reactions I wanted and accurate descriptions of the scene without any prompting for answers.

The last part, which many writers overlook, is choosing the title font. For Vitamin F, I got some advice from a friend working in graphic design and bulk book sales. For Scars Of Shadow, I looked for a font that was similar, but not as bold as the title card for the game Dark Souls.

I've seen the opposite situation too. A friend used a font styled like cursive script for one of his books. It was a lovely fantasy story with a romantic plot, so it fit. Then he put the same font on his epic fantasy that lacked a major romance angle. His work was good, but his title font belonged with some other book.

It pays to pay attention to other works in your genre.
When you're not writing, how do you spend your time?
I could be reading since that's been the family hobby for several generations.

I could be drawing since that's my other artistic passion.

I could be playing games. I've been with HeroClix since the game first launched. X-Wing is tons of fun because it forces me to predict what another player is about to do while I try to keep them from figuring out my own plans.

Years later, my best friend insisted I read a Wonder Woman comic by Greg Rucka. It was so good, I started reading anything Rucka I could find.

Most recently, I've been consistently impressed by Brandon Sanderson. He has rich characters, amazing worlds, and it always makes sense in the end. I can't imagine anyone working in fantasy right now that hasn't been impacted by Sanderson's work.
What inspires you to get out of bed each day?
Maybe there's something amazing that I'm looking forward to. A sunny day, spending time with friends, playing an interesting game.

As a writer, my best answer comes in the form of a quote from Stephen King's The Gunslinger: "There are other worlds than these."

If there are other worlds, how will anyone know about them if I don't open the doors and let people in?
Smashwords Interviews are created by the profiled author or publisher. 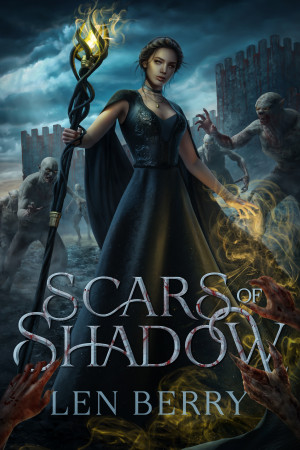 Scars Of Shadow by Len Berry
Price: Free! Words: 3,140. Language: English. Published: April 1, 2017. Categories: Fiction » Fantasy » Dark
Sarena, a cursed witch, wanders into a valley and discovers a bleeding wall on one side. The opposite direction serves as home to a village of refugees who despise those marked by the curse. Each night, defiled creatures emerge from the wall and attack the villagers. The only hope Sarena has in curing her curse is to continue helping those in need, people like besieged refugees.