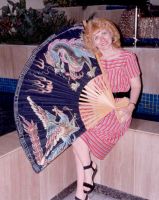 Published 2013-08-24.
Where did you grow up, and how did this influence your writing?
I came to America as a Greek infant on the rustbucket Laconia a few years before the ship yielded to its watery grave. My mother was a survivor of the 1922 "catastrophe", ethnic cleansing in Anatolia, and my father a refugee from Nazi assaults in 1930's Berlin. Their experiences in the Resistance against the Nazi occupation of Greece are echoed in Shiloh's missions, and in her passion for truth and justice. Dad went to work for NASA, and I was lucky enough to get actual Moon Rocks to show my classmates--as well as anecdotes about John Glenn's return to space on the Shuttle in '97. More details at http://novelspot.net/node/4402 Having your father rub shoulders with astronauts in the Star Trek TOS era inspired my desire to travel throughout our universe--if only in fiction.
When did you first start writing?
I wrote my first novel at age 10 about a young girl who ran off to join the circus. Yielding to my inner Mary Sue, I also penned a story of joining the travelers in the animated series Space Angel. The lure of independence and adventure that captured my spirit is echoed in Shiloh's adult experiences in "The Zygan Emprise", where, with a backpack full of courage, she joins the Zygan Intelligence Service and journeys across space and time to find her missing brother and save her family's lives. Mary Sues need not apply.
What's the story behind your latest book?
The Zygan Emprise begins with Renegade Paladins, the story of Shiloh Rush, who, along with her partner, William "Spud" Escott, joins the Zygan Intelligence Agency, in the hopes of tracking down her missing older brother, a star Zygan Intelligence agent. On assignment in ancient Judea to prevent the murder of prophet Yeshua Bar Maryam, Shiloh and Spud are double-crossed by Zygan Federation traitor and terrorist Theodore Benedict and his minions, and are forced underground, working with Zygan Intelligence dropouts to try to save Yeshua and the planet Earth. In part two, Abyssal Redemption, Shiloh and Spud travel to another universe to try to rescue her brother John. Their journey alters Earth's historical timeline, and Shiloh is faced with a brutal dilemma--must she sacrifice herself to save her family and the Earth she left behind?
How has Smashwords contributed to your success?
Smashwords has allowed me to share Shiloh's exciting story with readers for free! The first book in the series won a 2010 Mensa Sharp Writ Books Award. Kirkus review excerpts: Pascal’s writing is terrific–her narrative voice pulls the reader in and invests Shiloh with palpable emotion for her lost brother. The pacing is fast and continuous...an amazing piece of storytelling. A fantastic science-fiction ride.

I hope readers will enjoy Shiloh's and Spud's adventures through Smashwords!
Who are your favorite authors?
As an award-winning co-author of two medical thrillers, Dead Air and Devil Wind, I admire Michael Crichton's inspiring work in the genre. I'm also a fan of the great Sir Arthur Conan Doyle (Sherlock Holmes, of course), Douglas Adams (Hitchhiker's Guide to the Galaxy), and Gene Roddenberry (The Great Bird of the Galaxy).
What are you working on next?
Busy writing Book 3 of the Zygan Emprise--due out soon. Shiloh and Spud uncover the reality behind the curtain of the Zygan Federation and face a battle for freedom--and truth.
What motivated you to become an indie author?
It's the 2010s--no better way to reach an audience!
How do you discover the ebooks you read?
Smashwords!
What inspires you to get out of bed each day?
Let me see...the chance to help people as a doctor, the chance to share entertaining stories as a writer, the joy of spending the day with my beloved family and friends...? Well, if I'm going to be 100% honest...like everybody else, I gotta go to work and pay my bills.
When you're not writing, how do you spend your time?
Paying my bills. Like everybody else.
Describe your desk
Virtual. My desk is my imagination--and it travels with me around the world and across the universe. Getting the words down on paper--wherever I rest my wonderful Surface Pro and flip open the keyboard.
What is the greatest joy of writing for you?
Creating an entertaining ride for readers--and providing hours of fun.
What do your fans mean to you?
I'm deeply grateful to the many fans that have let me know how much fun they've had with Shiloh and Spud. So glad you loved "The Zygan Emprise"! And, if you're just meeting Shiloh and Spud--enjoy!
Smashwords Interviews are created by the profiled author or publisher. 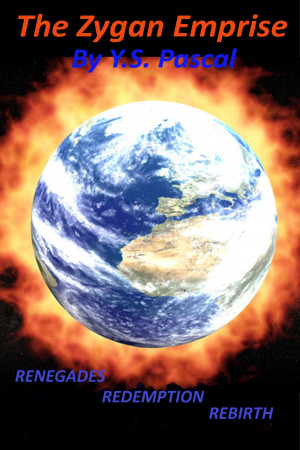 Award Winning! Renegade Paladins, Abyssal Redemption, and--NEW in 2018--Renaissance:Rebirth together in ONE volume. Join Shiloh Rush and William Escott as they race to find Shiloh's missing brother and save the Earth from villainous intergalactic terrorists and traitors in their midst. A fiery thriller ride! Winner of a Mensa Sharp Writ Books Award!