Published 2017-11-01.
When did you first start writing?
I think I always wrote. Words are so much fun to play with! For my mother there was a book of illustrated poems for every birthday from six or seven for a few years; I wrote my first novel when I was nine! I was writing letters for magazines for pin money and started writing for national newspapers when i was 17. I wrote my first stage play around that time - I thought it was 2 hours long but it was only about 15 minutes but that was me addicted to writing for theatre. To date I've had about 14 stage plays produced in Ireland and the UK. I was a freelance journo for about 13 years, writing books and plays on the side and gave the journalism up in 1997 to retrain as a screenwriter for film n TV, after having a few hours of material broadcast on RTE, the Irish national tv network. I've about 9 hours now of credits for film and TV and one BBC4 radio play but there are two books lined up for publication before the end of 2017, the sequel to Dad's Red Dress is bubbling away nicely and then there are about three other books at various stages I'm dying to get back to. Along the way, I'll be teaching screenwriting, creative writing and hanging out in coffee shops seeking inspiration!
What motivated you to become an indie author?
I've been a screenwriter and playwright for more than 20 years, writing books on the side and sending them out. Dad's Red Dress was felt to be too edgy for the Irish market and not edgy enough for the US one. So I decided to try this route. If nothing else, it gave me control over my material and I felt, if I did it professionally, it was a way to get one of my stories out there. I'm sending The Angelica Touch, my next novel to be formatted today (Nov 1st, 2017) which is exciting and have a screenwriting 'how to' book coming out later this year or at the start of 2018. It's called Write That Script! and is based on all the writing and teaching I've done since the 90s. The goal of the book is to give enough theory, examples and exercises to make sure people who want to write that first script do so.
How has Smashwords contributed to your success?
I'm new to Smashwords so I don't know yet! It does mean my books will get in front of a broader audience, which is fantastic. That's what's so interesting about this process - you really don't know where your book will go!
What is the greatest joy of writing for you?
I love characters and seeing what they'll say and do; I have so many stories to tell and creating these worlds on the page, then playing with all those ingredients and crafting it and improving this bit or that. It is hard work, especially rewrites but I can't think of anything else I'd rather do. Except, possibly, after three solid days of proof-reading, drinking a flat white while nibbling several chunks of chocolate.
What do your fans mean to you?
They're amazing. There truly is nothing more exciting than someone coming up to you and telling you how much they are enjoying or have enjoyed your book, wanting to talk about the characters as if they were real - they are to me ! - and then wanting to know when the next book or play will happen. I live in Dublin but yesterday I heard that a 13 year-old girl in Melbourne, Australia bought Dad's Red Dress into school for a presentation of 'must reads' to her year! I'm still buzzing at the thought of that!
What are you working on next?
The Angelica Touch, my new novel. It's being formatted, the wonderful cover is done - amazing designer and artist, Aoife Henkes. I want it to be available by the middle of November. Write That Script! is out after that, a practical and informal guide to getting your first screenplay down, not belittling the difficulty or size of the task but also celebrating the wonderful aspects and with lots of exercises to make sure you don't give up mid way. There is one other enormous fantasy book ticking away and then the sequel to Dad's Red Dress is a mélange of bits of scenes and chapters and fun stuff I need to pull together. It will probably be the next one after Angelica.
What inspires you to get out of bed each day?
Breakfast. I get hungry and then I make myself think of food and I'm up. But there will also be the work that's waiting for me - I'll start thinking of a bit of the new book or another project and suddenly I'm writing notes. That gets me up too!
When you're not writing, how do you spend your time?
Reading. Walking the dog. Going to plays. Meeting friends for coffee. Drawing. Procrastination is an art form!
Do you remember the first story you ever wrote?
Yes. My Cousin Nora and the Adventures She Brought With Her. It was a book of 56 pages I wrote when I was nine. Mind you, I do remember making the words really big so they'd fill the jotter pages more easily towards the end. It was about a witchdoctor substituting his daughter for a cousin due to visit a family in Dublin. This is back in the early 70s. It had voodoo dolls, brainwashing, poisoned chocolates, the lot.
Smashwords Interviews are created by the profiled author or publisher. 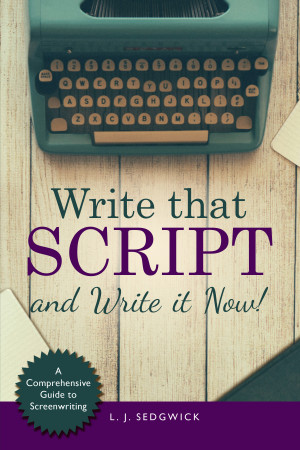 Write That Script! by L. J. Sedgwick
Price: $6.99 USD. Words: 49,050. Language: English (Irish dialect). Published: June 9, 2018. Categories: Nonfiction » Art, Architecture, Photography » Performing arts, Nonfiction » Entertainment » Entertainment industry
A practical, comprehensive guide to screenwriting from idea to first draft and rewriting, based on more than two decades of teaching screenwriting while working as a professional screenwriter. It has all the theory you need, examples to illuminate the theory and writing exercises to enable you to put the theory into practice and finish your script.