Published 2020-06-28.
Describe your desk
My writing location is ever changing with COVID19. My actual desk is a small picnic table left behind in a house I rented about twenty years ago. Curently, since my husband is using the office for work, I often work in the living room, kitchen or the screen porch. Thank goodness for the laptop mobility. On the porch, I enjoy listening to the various bird songs.

As for my co-author and hubby, he is chained to the office because he has a desk top.
Where did you grow up, and how did this influence your writing?
I grew up in rural Midwest. Sometimes, I will set a scene in Indiana because I'm tired of people misrepresenting my state. There is the perk of being familiar with it, too.
A great example of misrepresentation was on Star Trek:Voyager where Captain Janeway was remembering her home of Bloomington, IN as the plains of the Midwest. Sigh. I guess the writers confused Kansas and Indiana.

I also try to incorporate plants and wildlife that is part of the Midwest into the story, too, along with regional recipes.
When did you first start writing?
My mother and sister taught me to read and write at four. By the time, I entered first grade, I was bored since I already learned what that year was supposed to be about. I read the first grade reader in a day and found Dick and Jane to be dull children. To enliven the tale, I invented alternate endings including horses, bad guys, jumping off cliffs, and runaway trains. This was reflective of the drive-in westerns we watched.

My first published work, which was a poem, happened when I was fifteen.
What's the story behind your latest book?
My latest book, On St. Nick's Trail, takes place in Santa Claus, Indiana, and Santa is missing. Private Investigator Nala Bonne and her dog Max must finding the missing elf before anyone realizing he's gone. The entire town works at the Christmas theme park that is based around the fellow. Turns out someone doesn't want Nala to find Santa and will stop at nothing to prevent her from uncovering the town's secrets in the process.

This is a fun cozy mystery with the flavor of Southern Indiana.
What motivated you to become an indie author?
I used to work for two different publishing houses, but they both went under. My husband and I had the Sleeeping Dragon Press already running for our cozy mysteries when the second company failed. It was easy to transfer the books.
How has Smashwords contributed to your success?
Smashwords allows me to get books to people I might not have reached before.
What is the greatest joy of writing for you?
There are so many joys. It's hard to pick just one. Sometimes, it is contemplating the idea of a story, series, character, etc. Other times, it can be that overheard conversation or story that would be perfect in a book. Most of the time, it is meeting the readers, be it in person, on social media, or email. There's always a certain amount of satisfaction at typing The End, too.
What do your fans mean to you?
My fans both motivate and inspire me. They've come up with situations for books, names for characters, even titles. When I want to know something, I throw it out to the fans. They've encouraged me to continue a series I stopped, too.
What are you working on next?
Currently, I am getting On St. Nick's Trail polished for release. I'm outlining my fifth Late novel and brainstorming an entire new series with a mother nad daughter catering team.
When you're not writing, how do you spend your time?
Gardening, although, I do a fair amount of cooking. My hobbies include reading ( no surprise) and making jewelry.
Do you remember the first story you ever wrote?
There were all those alternative ending stories for the first grade reader.

When I was in junior high, I wrote a satire about the creation of Earth complete with commercials. No people just talking animals that represented folks I knew. This particular tale was very popular in school because other students kept trying to guess who the animals were. It was often picked up by teachers because students were off task, but even then I knew enough not to use my real name. The teachers never connected the story to me.
What is your writing process?
Before I start a story, I bounce ideas off my husband.
Then, I think about it a great deal. Do research on the subject and location.
Then I sit down and write the first chapter to get a feel for it.
Somewhere around the sixth chapter, I will outline the book about what has to happen in each chapter.
Yes, I do go back and change things I already wrote.
Each chapter goes to my husband, who edits it and rewrites some of it.
It comes back to me and I look over his changes, before adding more.
Next it goes to the editor, eventually the proof reader and beta readers.
Do you remember the first story you ever read, and the impact it had on you?
A Tree Grows in Brookyln by Betty Smith

I read this as a country kid who had no feel for the big city. She painted such a vivid portrayal of Brooklyn at that particular time.
How do you approach cover design?
I used Dawne Dominque and Anya Kelley for covers. I tell then the title, the tagline, and important elements of the story.
They send me drafts and I might make suggestions. The series covers have similar devices.
What are your five favorite books, and why?
In no particular order, my favorite books are:
1. Black Beauty by Anna Sewell ( Because I love horse.)
2. A Tree Grows in Brooklyn by Betty Smith
3. The Hobbit by J.R.R. Tolkien
4. The Martian Chronicles by Ray Bradbury
5.Ten Little Indians by Agatha Christie
Smashwords Interviews are created by the profiled author or publisher. 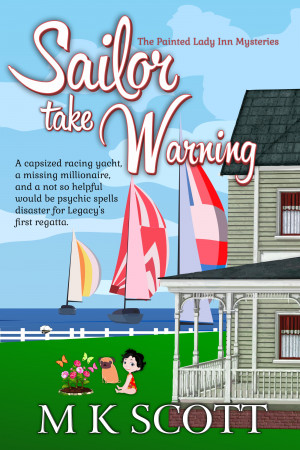 Sailor Take Warning by M K Scott
Price: $0.99 USD. Words: 52,170. Language: English. Published: May 2, 2020. Categories: Fiction » Mystery & detective » Cozy, Fiction » Mystery & detective » Amateur sleuth
A race yacht has capsized. A millionaire has gone missing. If that and the involvement of a would-be psychic aren’t reason enough to worry, adding Donna’s meddling mother to the mix will jeopardize Legacy’s reputation even further. Can Donna rein in the chaos before it's too late? 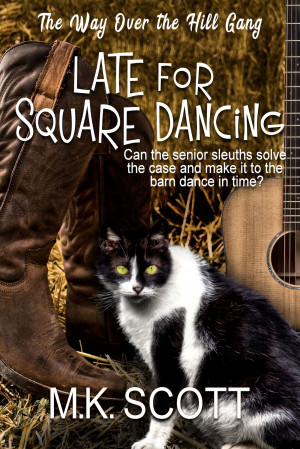 Late for Square Dancing by M K Scott
Price: $0.99 USD. Words: 47,690. Language: English. Published: January 6, 2020. Categories: Fiction » Mystery & detective » Amateur sleuth, Fiction » Mystery & detective » Cozy
A missing woman. A surprising suspect. A curious conundrum. The senior sleuths have a knack for sniffing out trouble, but when a missing woman cold case falls in their laps, all hands must be on deck to solve it. Can they juggle crime solving along with planing a barn dance for center residents? 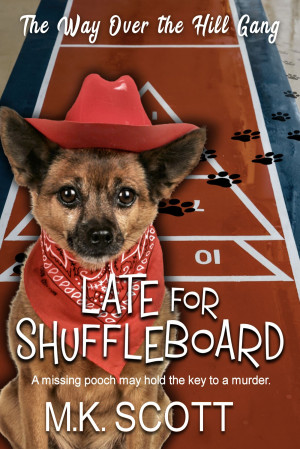 Late for Shuffleboard by M K Scott
Price: $0.99 USD. Words: 53,230. Language: English. Published: July 10, 2019. Categories: Fiction » Mystery & detective » Cozy, Fiction » Mystery & detective » Amateur sleuth
The senior sleuths are hot on the trail of a veteran’s murderer and a missing dog. Only a few short days before the victim’s home is razed and all the potential evidence is wiped clean. With new complications at every turn, the Senior Sleuths feel the heat to solve the crime before all the truth is buried. 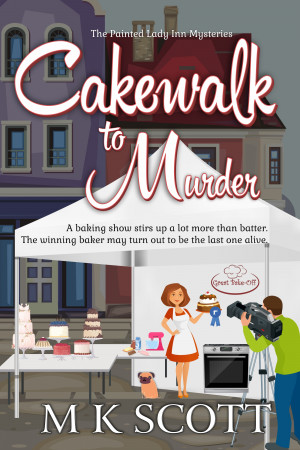 Cakewalk to Murder by M K Scott
Price: $0.99 USD. Words: 63,860. Language: English. Published: April 12, 2019. Categories: Fiction » Mystery & detective » Cozy, Fiction » Mystery & detective » Women Sleuths
Bake-off fever is in full-swing and Donna can’t help but have visions of becoming the next great baking star, but the competition is stiff, and someone is willing to kill to win. When one of the contestants is found dead, a twist of fate puts Donna at the center of the competition. That’s the perfect position to unravel the mystery, but only if she doesn’t get caught in the cross hairs. 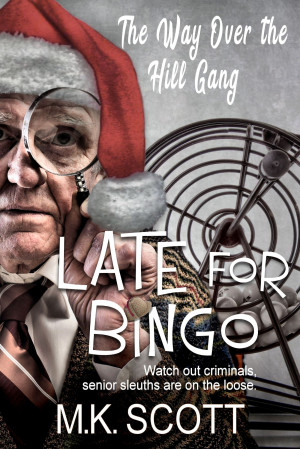 Late for Bingo by M K Scott
Price: $0.99 USD. Words: 54,530. Language: English. Published: December 24, 2018. Categories: Fiction » Mystery & detective » Cozy, Fiction » Mystery & detective » Amateur sleuth
The Way over the Hill Gang is back at it again! This time their mission is to find justice for a slain single mother, but this cold case proves to be more complicated than they initially believe. With little to go on, no resources, and a limited amount of time to search for answers, can they crack this long-forgotten case and bring the murderer to justice? 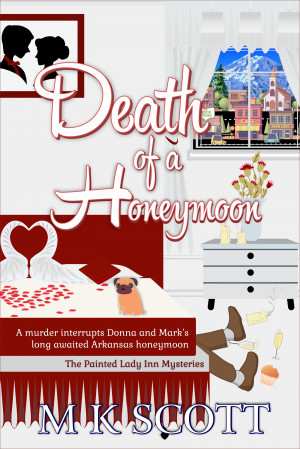 Death of a Honeymoon by M K Scott
Price: $0.99 USD. Words: 47,690. Language: English. Published: September 30, 2018. Categories: Fiction » Mystery & detective » Cozy, Fiction » Mystery & detective » Women Sleuths
Death of a Honeymoon features the crime solving duo from The Painted Lady Inn Mysteries cozy mystery series. Donna and Mark's long awaited honeymoon is riddled with minor and major catastrophes including car problems and stumbling accross a dead body. Their intention is not to help the overworked sheriff, but it's hard for Donna to resist a mystery. 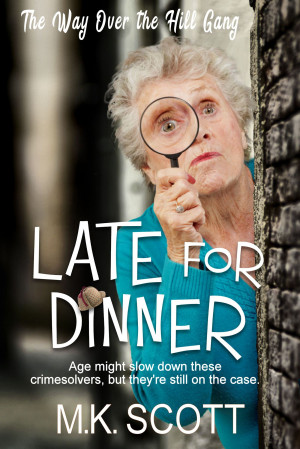 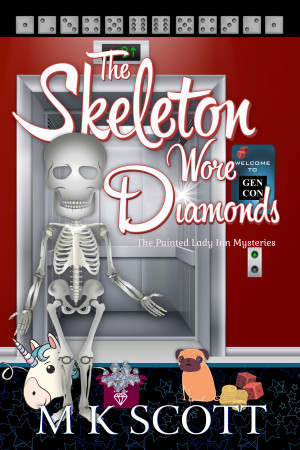 The Skeleton Wore Diamonds by M K Scott
Price: $0.99 USD. Words: 64,290. Language: English. Published: June 18, 2018. Categories: Fiction » Mystery & detective » Cozy, Fiction » Mystery & detective » Women Sleuths
Legacy unexpectedly scores the regional Gen Conference, but their good fortune is short-lived when one of Donna’s guests dies mere hours after arriving at the inn. And that’s only the beginning of what will turn into a full-fledged disaster. It will take more than a ten-sided die to locate the killer. 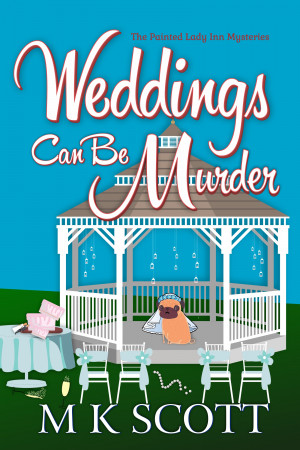 Weddings Can Be Murder by M K Scott
Price: $0.99 USD. Words: 70,680. Language: English. Published: December 28, 2017. Categories: Fiction » Mystery & detective » Cozy, Fiction » Mystery & detective » Amateur sleuth
The small town of Legacy is finally ready to celebrate the impending marriage of Detective Taber and bed and breakfast owner, Donna Tollhouse. Before the two can say I do they have to solve the mystery of the murdered wedding planner and round up escaped nursing home residents, who decided to partake in one last adventure. Join the entire gang from The Painted Lady Inn series in this tale. 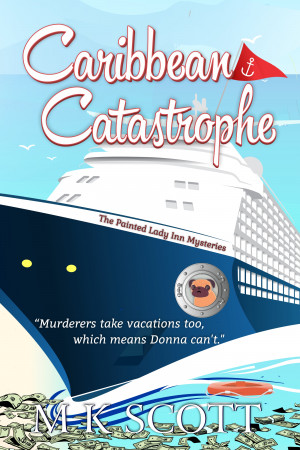 After some gentle nudging from her best friend Janice, Donna sets sail on the high seas with visions of sipping exotic drinks and relaxing under the sun. Less than forty-eight hours later, a guest inexplicably plummets to his death, and you-know-who has a case on her hands. So much for fun and sun. Now she must don her sleuth hat and get to work. Sixth book in the cozy mystery series.
View their profile to see all of their books