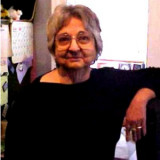 Published 2013-12-19.
Do you remember the first story you ever read, and the impact it had on you?
I don't know if read is the right word. When I was three, I used to look at the National Geographic Magazine for hours. Adults shut my questions up by sticking the Geographic under my nose. Of course, when I came up for air, I had more questions.

Guess it's one reason I like exotic settings so much.
How do you approach cover design?
I hire it out. But I do insist on a legible font so dyslexics like me can read my covers.
What are your five favorite books, and why?
This is always a difficult question for me because so much of it depends on my mood. Authors are a better bet. Some of the ones I reread the most are Tamora Pierce Georgette Heyer [Regency fantasies], Llona Andrews, Patricia Briggs, and Lee Child.
What do you read for pleasure?
Fantasy, mysteries, paranormals are the genres I gravitate towards.
What is your e-reading device of choice?
Don't like ereaders. After writing on computer all day, I want to run away from a screen.
What book marketing techniques have been most effective for you?
Your asking the world's worst marketer? I do have a social media presence -- websites, Facebook, Twitter, LinkedIn, Google+, etc. -- but sales is a deep mystery for me.
Describe your desk
Festering piles of paper in need of excavation -- all four of them.
Where did you grow up, and how did this influence your writing?
California foothills. Have set a couple of book drafts there, but I don't think it influenced my writing. Discovering fantasy did more to focus my writing.
When did you first start writing?
In the sixth grade when the teacher made us write a short story. It set the course of my writing life. I wrote 25 pages without an ending and got a "C". Did finish it as a full length middle grade novel the next summer though. Short stories are still difficult for me.
What's the story behind your latest book?
I'm currently writing about the beginnings of the Far Isles Half-Elven, a novella tentatively called Forbidden Fruit. Storyline: How Teemon, the elf prince, came to live on the human planes and the beginnings of precipitation the Half-Elven rebellion against genocide by religious fanatics.
What motivated you to become an indie author?
I'm too old to wait around for publishers to get their act together. Besides, I'm impatient at the best of times.
What are you working on next?
My publisher, The Grumpy Dragon, wants me to write a sequel to There Be Demons.
Smashwords Interviews are created by the profiled author or publisher. 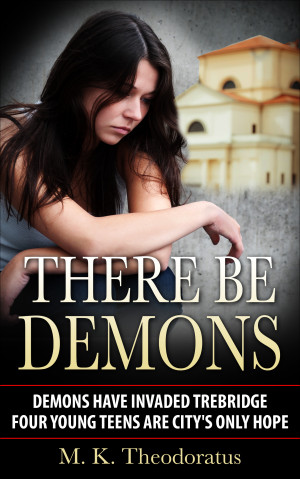 There Be Demons by M. K. Theodoratus
Price: $2.99 USD. Words: 89,330. Language: English. Published: October 15, 2018. Categories: Fiction » Fantasy » Paranormal, Fiction » Fantasy » Urban
After her parents' divorce, Britt Kelly's life shatters when her family moves into the projects with her half-sister. But her problems don't end with adjusting to no money and a new school. She is drafted to fight on the side of the Gargoyle Guardians of the City against invading demons. An engrossing tale of good and evil with a different take on fantasy clichés. There Be Demons delivers a world 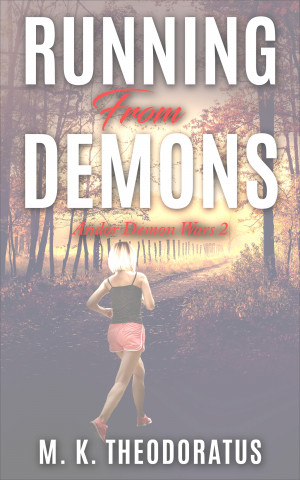 Running from Demons by M. K. Theodoratus
Price: $2.99 USD. Words: 89,320. Language: English. Published: September 5, 2018. Categories: Fiction » Fantasy » Urban, Fiction » Young adult or teen » Fantasy
A girl with a secret past. A demonic conqueror. The fate of a world hangs in the balance… Pillar Beccon can't remember belonging anywhere, especially not in the Freemage commune where she grew up. After she graduates from high school, she jumps at the chance to learn why her mother ran away from her family far to the East. But danger haunts her journey as a demon seeks to destroy her. 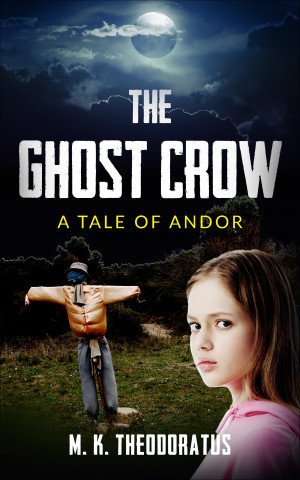 Dumdie Swartz knows ghosts walk among us. She’s seen them since she was a little kid. Dumdie does her best to avoid them--harmless or dangerous, alike--even though she annoys her family when she does. Now, with her unwanted ability growing stronger, a demon possessing a mundane boy notices her special talents and has plans that will change her life forever. 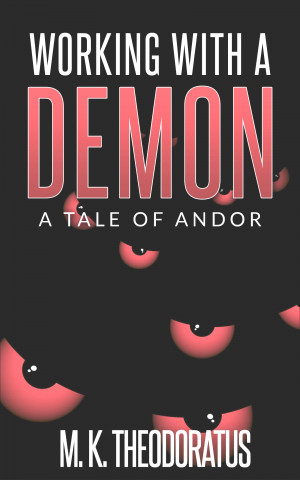 Working with a Demon by M. K. Theodoratus
Series: Tales of Andor. Price: Free! Words: 4,780. Language: English. Published: January 16, 2015. Categories: Fiction » Fantasy » Contemporary, Fiction » Thriller & suspense » Supernatural
Demons are coming to take Dr. Allsdipp, a Nobel Prize Winner, away. He doesn't want to go, and his fight to keep his soul has made him the oldest person alive. Grant Highgrim, a down and out reporter, has a chance to become a real reporter again--if he can interview the oldest man alive, but first, he must save the geezer from a legion of beetle-demons coming to claim his soul. 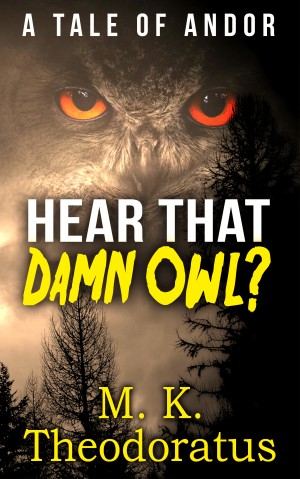 Enraged that he gave in to his mother's demands to return home or lose his inheritance, Crayton takes his anger out on a dive-bombing owl prowling a gas station in the mountains. When a codger warns him about wrathful owls, he dismisses the cautions as local folklore. Will the owl seek revenge? 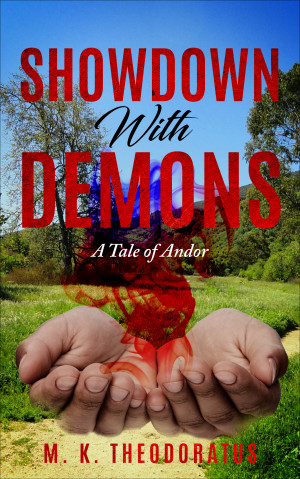 Ebe loved the peaceful live of his isolated mountain community until abrasive newcomers started raising vicious guard dogs. The newcomers terrorize the locals, and Ebe finds himself in their sights along with an old family friend because they oppose their abusive ways. When the 'dog-farmers' murder a local healer/magic-worker, Ebe must defeat the demons if he's to regain his self-respect. 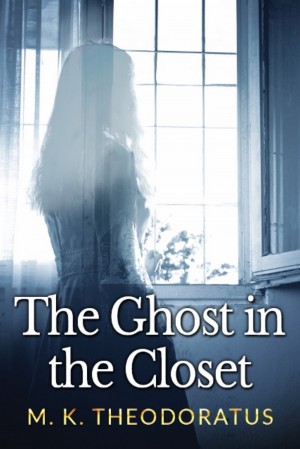 Some say seeing ghosts is a gift, but after losing her job, Dumdie Swartz says, "Hogwash". After trying to avoid them all her life, she'd become homeless after she lost her job because of them. Now she's in a homeless shelter with a ghost haunting her room. Dumdie must find the ghost's will if she's to stay off the streets. 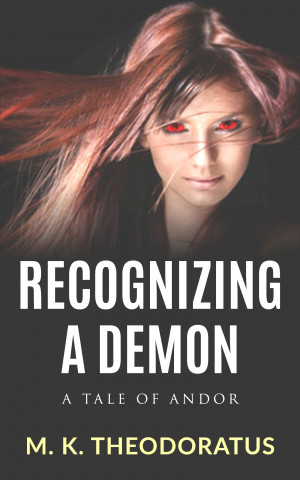 5* Reviews: "A shadowy tale of witchcraft and darker dealings" with a “sharp lush tone and vivid imagery” Having a crippled leg and latent magical abilities aren't Cassy Mae's worst problems. A stalker, who lusts for her growing magic, seeks to possess her. 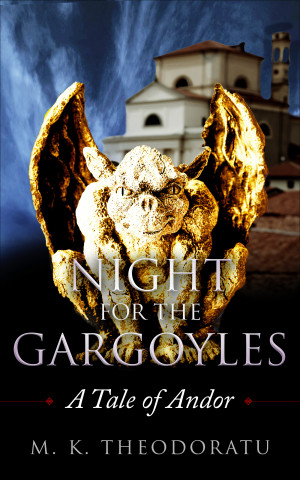 Who to fight? The Demons overrunning the city or Orvil, the rival lusting for his position. The four gargoyles guarding Trebridge are outnumbered. Gillen, their leader, is caught between fighting Demons and the schemes of Orvil to replace him. He tries patience with Orvil and asks the angels for reinforcements. Will help come in time? If you liked this story, please review it. Thank you. 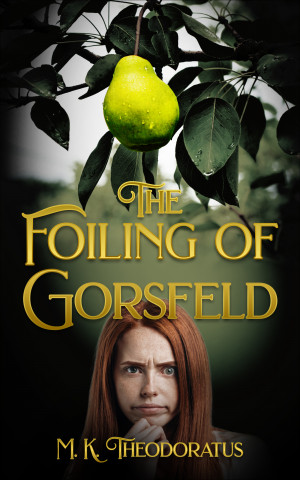 The Foiling of Gorsfeld: A Tale of the Half-Elven by M. K. Theodoratus
Price: Free! Words: 2,730. Language: English. Published: November 2, 2011. Categories: Fiction » Fantasy » General, Fiction » Fantasy » Epic
This suitor is unwanted. When Gorsfeld, scion of the richest family in the Marches, comes a courting the young Mariah, he refuses to take "no" for an answer. Mariah needs to discover a way to discourage her unwanted suitor without breaking the code of hospitality or making her foster father angry. --- A Far Isles Half-Elven short story. If you liked this short story, please review. Thanks
View their profile to see all of their books