This interview has been viewed 227 times.

Let's talk about the title of the novel, "The Irrelevant Tales". Where did that come from?
Well, similar to "The Canterbury Tales", I wanted one novel of various different points of view all tied together by one overarching story line. The word "irrelevant" has a couple of different meanings in the novel. Each chapter, each tale, seems irrelevant at first but they're not. They paint a picture for you, but you many not know that's what's happening. It's like you're watching each stroke of the paintbrush dabble paint onto a canvas and it isn't until you're vested in the novel that you begin to see the form of it take shape. It's no accident that my main narrator is an impressionist painter or that everyone else's tale is being presented or collected by him. Of course, the main character's name is Irel E. Vant, so the title is also a play on words. Then there's the idea that the title and his name are, in themselves, irrelevant. I very much like that.
In your novel, "The Irrelevant Tales", every chapter is told through first person narration, but you have various different narrators. Why did you go with that approach?
The form of "The Irrelevant Tales" changed a lot from the time I came up with the original idea. I wanted it to feel like a collection of stories, or "tales", like "The Canterbury Tales". To do that I felt like I needed various perspectives. I wanted to show how the main character, Dr. Vant, was seen through the eyes of different people. So you get a well rounded impression of who he is. It was also a chance to get really creative and challenge myself. Interestingly enough, the term "impressionism" from a literary perspective also deals with how a character perceives a situation. So I think my novel is quite fitting on number of levels.
How does "The Irrelevant Tales" fit into the style of literary impressionism?
Well, before I really knew what impressionism was, as a literary style, I saw "The Irrelevant Tales" as being impressionistic. By that I mean it gives you various impressions of a character or situation without telling you what to think about that, how to feel about it and whether or not it's even real in the context of the story. That, to me, allows the reader to get an overall idea of things and form their own impression.

Later, once I found out more about the term "impressionism" as it applies to literature, I discovered that my novel shares many other attributes of that style. For example, describing actions and events through a character's view as they are happening, avoiding telling the narrative in chronological order, and using emotion rather than giving things away.

You also don't get a full understanding of the plot or the characters until the very end. That means you have to take a step back after you've read it and think back on everything that transpired to really get a feel or impression of the novel. I think that having had a formal education as a screenwriter brought me to this style of writing. In writing for film you don't really tell your audience things you show them those things and let them connect the dots.
In "The Irrelevant Tales", you introduce a ton of characters from all different cultures and backgrounds. Why?
The short answer is that I love diversity. Growing up in Metro Detroit I was exposed to people from all walks of life. Once I moved to New York, I was completely submersed in diversity. I love it. I love learning about people and their heritage. That's partly why I made Dr. Vant so in love with anthropology.
"The Irrelevant Tales" touches on a diverse range of taboos, why?
The idea of something being taboo is fascinating. What makes something taboo? Society does. As a lover of stories I enjoy learning about various cultures and their taboos. By addressing taboos in my writing I'm asking the reader to analyze their own taboos and try to see themselves through another point of view.

"The Irrelevant Tales" explores situations and subject matter that a lot of people will not be comfortable with. My job as a writer is to get you to think about those things. You don't have to like them or even have an opinion on them. But I think it's important to bring awareness of them to people. I don't think many books, films, or TV shows do that. I think more are starting to, but not enough. Societies tend to stick to material they find acceptable. The flip side of that is when people watch or read something for its shock value. I'm not trying to shock people with my writing. I'm trying to get them to realize there's more out there than they know about.
Regarding religion, in "The Irrelevant Tales" there seems to be a conflict of interests between O'Brien's Catholic views and Dr. Vant's atheist outlook. What can you tell us about that?
Aside from creating interesting dialogue and situations between them, not to mention a lens by which they see the world, I myself was trying to figure out what religion meant to me and how that differs from spirituality. I also use a lot of Celtic terminology and symbolism, almost as a common ground between them.

Now I don't think that Dr. Vant is an atheist. He's not really agnostic either. He certainly believes in some something. He refers to a universal energy or essence. That belief allows him to justify many of the actions he takes. I enjoyed exploring what was morally or ethically right with these two characters. It's really interesting because when it all comes to a head you feel like you know both of them and you can see their perspective. So by pitting their views against each other I hope to get my readers to realize that they can understand other people, other religions, other cultures, if they just take the time to get to know them. On the surface we're all different, deep down we're all the same.
Why is it "The Irrelevant Tales" flirts with the supernatural but never immerses us into it?
I tried to be very careful about introducing unbelievable elements. Whenever I did, I wanted them to feel believable, at least within the world of the novel. I made a conscious effort to slowly ease the reader into those ideas. Sometimes baby steps help to guide someone into something they'd never otherwise engage with.

Most of the supernatural ideas come from the words of Dr. Vant himself, which I love, given that he has more of a scientific background being an archaeologist. I also do that to question Dr. Vant's sanity. It isn't until the climax that O'Brien has a slight encounter with it himself, which kind of makes the reader wonder if Dr. Vant may have things right after all.
Where did you grow up, and how did this influence your writing?
I grew up in the small town of Center Line, Michigan, which is a suburb of Detroit. What was great about growing up there was that you got to experience a great sense of community and yet you were part of Metro Detroit, which is incredibly diverse. Diversity is important to me. I don't think any one way of looking at the world is the right way. That's a message that I always work to bring up in my writing. Growing up in a small town also directly influenced the angle I took with my narrator, William O'Brien, in my novel "The Irrelevant Tales". That hard working blue collar mentality helped to shape my outlook on life which I draw upon a lot with O'Brien.
What are your five favorite books, and why?
That's a tough one. I love to read and I've been inspired by so many great books and authors. A few that stand out to me the most are Joseph Campbell's "The Power of Myth", because he took the greatest stories of the world and distilled them down into one underlying paradigm and "Memoirs of a Geisha", which completely captivated me with its rich imagery.

I also love, "Game of Thrones" and the entire "Song of Ice and Fire" saga. There's something about not being able to trust any one character fully that I absolutely love. George R.R. Martin is a creative genius. Then there's "Angela's Ashes". Frank McCourt just had a way of bringing you into his world. To this day, I can practically taste the fish and chips he wrote about. Finally, of course, I'd have to say "The Complete Works of Sherlock Holmes". I've been greatly influenced by Sir Arthur Conan Doyle and his writing style.
What is your writing process?
My writing process usually begins with a lot of day dreaming. Ideas come to me from everywhere and sometimes I just have to sit down and begin to sift my thoughts. When I get my first ideas I'll start to question myself about them. I'll do that to flush them out. Like if I think about an old white house on an open plot of farm land, I'll ask myself: "Who lives there? Why? What do they do?" That sort of thing.

Once I get a good deal of the overall background context figured out, I usually find a good notebook and begin to plot a rough outline and the major highlights. Then I'll break that down into chapters and do the same thing. Last, I'll break the chapter down into a summary. To me this process provides a general blue print. After that, I keep the notebook with me as I sit down to the computer and begin to get the all of the details and dialogue out organically. The writing itself can be frustrating and I can spend all day on a paragraph, especially if research is involved. But it's worth it. I love writing.
When you're not writing, how do you spend your time?
My problem is that I love to do so many things and I never have enough time to do them. I enjoy spending time with my wife. I read and watch great television shows and movies. I like painting, exploring nature, visiting quaint little towns, spending time with good friends and family, traveling, cooking, researching, reading tarot cards, yoga, meditating, bike riding, and learning new things. I really love to learn. I miss college.
What are you working on next?
I have a ton of ideas in my head. Currently, I have a couple of great stories that I want to really flush out and explore. One is more medieval sci-fi another is exploring religious diversity in the modern day. Of course, I'm working on the sequel to "The Irrelevant Tales". Whether or not "The Irrelevant Tales" is commercially successful will determine how soon I write the sequel, but I will write it because I, myself, want to know what happens to these characters.
Published 2016-07-04.
Smashwords Interviews are created by the profiled author, publisher or reader. 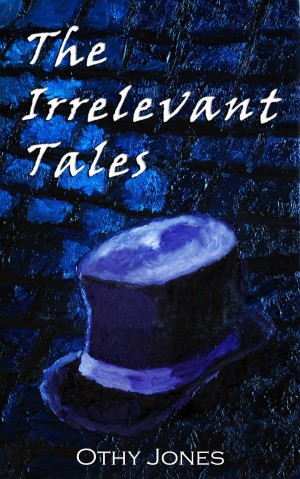