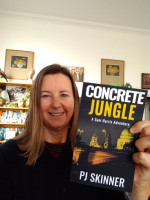 Published 2018-01-27.
Where did you grow up, and how did this influence your writing?
I was born in England and brought up in Ireland during the troubles. Being brought up in a country with a culture so heavily influenced by the Catholic religion had a strong effect on me. I was brought up in the era of women's liberation and I thought it was obvious to everyone that women were equal to men but I quickly learned that there weren't too many men who agreed at that time, especially in Ireland. I didn't want the traditional women's role expected of me. It made me long to get away and prove myself which is why I ended up going to such remote and dangerous places. This all had an influence on what I wanted to write about. Sam Harris is a heroine. She is my alter-ego and I use her to explore the experiences I have had in my life in the Sam Harris Series.
When did you first start writing?
I started writing at about eight years old and then stopped until my forties when I needed an outlet for all the material swirling around in my head.
What motivated you to become an indie author?
I still have a day job so this was the easiest way to get my work out there quickly without having to search for an agent. I felt I was working in a vacuum at home and I wanted contact with readers to test out my novels and give me feedback. I like being in control of my schedule and output in case I have to go on a contract job somewhere I haven’t time to write.
Who are your favorite authors?
I love Gabriel Garcia Marques, Jorge Amado and Mario Vargas Llosa whom I read during my years in Latin America. Evelyn Waugh, Graham Greene, John le Carre, Barbara Kingsolver, Henning Mankell, Andrea Camilleri, and Kate Atkinson are all wonderful. Brazzaville Beach by William Boyd, is a particular favourite.
When you're not writing, how do you spend your time?
I love sport and I play golf and tennis and go to rugby matches. I do a lot of reading too. I still have a day job consulting on exploration geology which is hard to do with all the characters whizzing around your head demanding attention.
What is your writing process?
I tend to think a lot before I start. I have tried writing outlines but I always give up when the urge to write becomes too strong. Sometimes I finish the outline later and use it to move some stuff around. When I get near the end I am never quite sure which ending is going to win. It takes me a couple of months of thinking before I start writing the climax and then I find it very hard to stop for food or sleep.
How do you approach cover design?
I make mock-ups of what I want and I send them to the Book Cover Cafe where they turn them into professional designs. They are limitless in their patience with me and I really appreciate working with them
What's the story behind your latest book?
I am working on writing the first draft of the third book in the Sam Harris Series, Star of Simbako, which follows the career of our unwilling heroine, Sam Harris, and her first job in the African Continent. A potent mix of diamonds, voodoo, and FGM, the book is set in West Africa. Sam's attempts to explore for diamonds are disrupted by her two companions, Fergus and Ned, and the machinations of the local people, including The Paramount Chief, Joseph Sesay and his daughter Adanna, his factotum Tamba, and the jealous housekeeper Fatimata. The second book, Hitler’s Finger is due out on 1st March and I’m hoping to publish the third at the end of July 2018.
What inspires you to get out of bed each day?
Breakfast. I love breakfast
What do your fans mean to you?
I dont know that I could claim to have any fans yet. I will keep writing if anyone wants to read my books because they give me great pleasure and I love to make people happy. I would love to have loyal fans but I have to earn them first.
Smashwords Interviews are created by the profiled author or publisher.