This interview has been viewed 490 times.

What inspires you to get out of bed each day?
It's a bit hard to live if you stay in bed all day. Makes it hard to use the john too.
When you're not writing, how do you spend your time?
Working for a living, playing video games, watching YouTube videos, and doing a lot of thinking. I also eat food and drink liquids.
Describe your desk
What desk?
How do you discover the ebooks you read?
I usually use this thing called an "iPod". Because I'm old-school like that.
What is your writing process?
I first read the relevant material very carefully. This is when I come up with most of the chapter headings.
Then I write out the first draft in longhand, because -- as I was saying when I answered the last question -- I'm old-school like that.
After that's done, I move on to the second draft, which I type out on the computer. This is the one that I then modify as I do more research on the subject matter, and come up with more jokes.
It's really quite fun once you get used to it.
What do you read for pleasure?
What kind of question is that, Smashwords?
What is this thing you call "pleasure"?
Never heard of it.

As for what I read for The Thing That Has Gone Unheard Of, let's see... I read Horror (mostly from Stephen King), Science Fiction (from a bunch of different authors), Fantasy Romance (mostly the sci-fi and raunchy kind... I mean, come on, I am a man, after all), and Religious Fiction (a rather redundant term, I know, but I couldn't think of a better one).

Actually, now that I think about it... scratch that last one off the list. I sure as hell do not read "holy" books for pleasure.
Who are your favorite authors?
Stephen King, Christine Feehan, Jim Butcher, John Ringo, Lora Leigh, Greg Bear, and, um... Damn, I haven't actually read that much lately. Been too busy working on my own book.
Do you remember the first story you ever read, and the impact it had on you?
I don't actually remember the very first story I ever read, but the first one I do remember -- very vaguely -- was "Where The Red Fern Grows". Although I don't remember who the author was, and I feel no particular urge to go and read the book again, I do remember thinking that the story kicked ass. But since I'm talking about a book that I read when I was only 9 or 10 years old (I'm 39 now), I cannot exactly vouch for my former taste in reading material.
What is your e-reading device of choice?
I'm pretty sure I mentioned the iPod a few answers back, Smashwords. Just how short is your memory, anyway?
I'm hoping I can upgrade to an iPad Air one of these days, though.
Reading through a magnifying glass is not that much fun.
When did you first start writing?
When I first began to read.
Why? Did you start at a different age?
Did you have an irrational fear of writing?
Perhaps you need some therapy.
What motivated you to become an indie author?
I'm not good enough at this writing thing yet to become an established one.
What is the greatest joy of writing for you?
Laughing my ass off at all my jokes.
Because someone has to.
What's the story behind your latest book?
Once upon a time, in a land far, far away, some Middle-Eastern goat-herders were stumped for answers and decided to just make up their own. And then, many times upon later times, other people decided to not even do that, and just took those guys at their word.

What's that, Smashwords?
Oh, did you mean to ask why I wrote MY book?

I saw that other people were writing similar books and thought "Why not me?"
Besides, I have a minimum-wage job right now, and I'm trying desperately to keep from dying in it.

So, yeah, I'm doing it all for the money.
Or, rather, it's the un-evolved monkeys in my nonexistent basement that are doing it.
How has Smashwords contributed to your success?
Nice trick question there, Smashwords.

I only just submitted my first book today.

You're not fooling anybody.
What do your fans mean to you?
Another trick question?

The only fan that I have right now is the one that's keeping me from sweating puddles.
What are you working on next?
Part two of "Butchering The Bible". Where religious piety comes to die.
Published 2014-03-21.
Smashwords Interviews are created by the profiled author, publisher or reader. 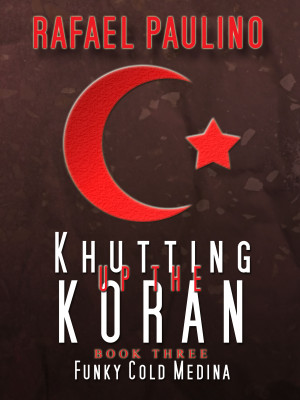 Khutting Up the Koran Part Three: Funky Cold Medina by Rafael Paulino
Series: Khutting Up the Koran. Price: $0.99 USD. Words: 37,990. Language: English. Published: September 3, 2017. Categories: Nonfiction » Religion & Spirituality » Islam / Koran & Sacred Writings
This is the most fun third book ever written about the most boring "holy" book ever written! Totally not worth the price of admission! DO NOT buy this book! Buy my other series instead! Bonus Introduction with book! Isn't this EXCITING! I LOVE exclamation marks!!! What's that? You prefer question marks??? What are you, some kind of pansy? Last Updated: January 15, 2018 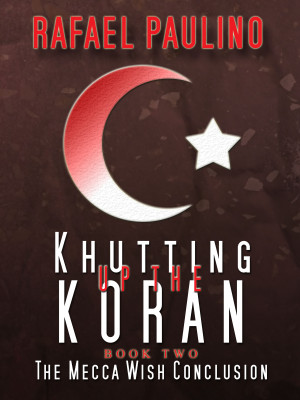 Khutting Up the Koran Part Two: The Mecca Wish Conclusion by Rafael Paulino
Series: Khutting Up the Koran. Price: $0.99 USD. Words: 40,480. Language: English. Published: May 30, 2016. Categories: Nonfiction » Religion & Spirituality » Islam / Koran & Sacred Writings, Nonfiction » Religion & Spirituality » Islam / Theology
In this book, we will explore even MORE of the crushingly boring "revelations" of the Islamic Brainwasher's Manual, as Muhammad lets his inner Allah do even MORE of the talking, and, as a result, ends up having to flee from Mecca and settle in the city of Medina... where he will eventually talk about even MORE of the boring stuff, I'm sure. Whee! What joy! Last Updated: January 15, 2018 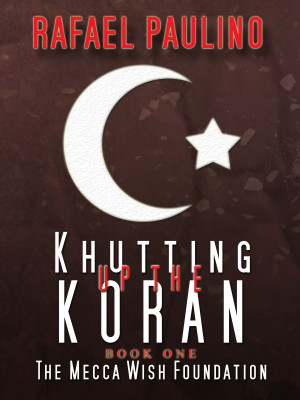 Khutting Up the Koran Part One: The Mecca Wish Foundation by Rafael Paulino
Series: Khutting Up the Koran. Price: $0.99 USD. Words: 25,340. Language: English. Published: January 17, 2016. Categories: Nonfiction » Religion & Spirituality » Islam / Koran & Sacred Writings
From the Author who brought you the much better written "Butchering the Bible" series comes the next chapter in book-killing horror. So strap in, grab a cup of Spice Coffee, and get ready to experience the worst ever retread of a holy book. From MUHAMMAD, that is. THIS Author is not that bad a writer. No, really, I'm not. Hey wait! Come back! WARNING: Not safe for Muslims. Last Updated: 1/15/2018 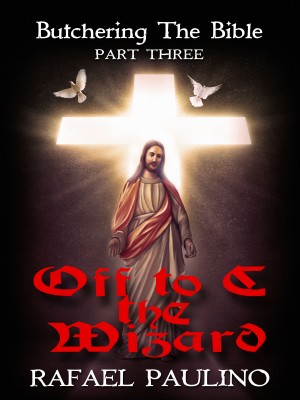 Butchering The Bible Part Three: Off to C the Wizard by Rafael Paulino
Series: Butchering the Bible. Price: $2.99 USD. Words: 121,860. Language: English. Published: December 25, 2014. Categories: Nonfiction » Religion & Spirituality » Biblical Criticism & Interpretation / New Testament
In the final installment of the "Butchering The Bible" series, we will witness -- i.e. read about -- how Jesus saved Christmas by being born in the spring, how his Apostles saved the world from ending by prophesiziing that end ad nauseam, and how the addict once known as John of Patmos saved the Narrative from dying of boredom with his, well... Revelation. Last Updated: January 15, 2018 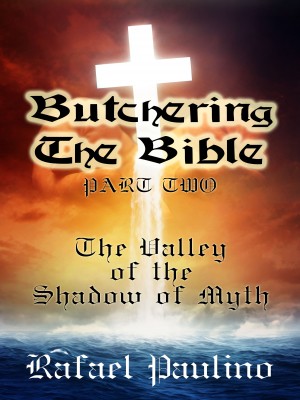 Butchering The Bible Part Two: The Valley of the Shadow of Myth by Rafael Paulino
Series: Butchering the Bible. Price: $2.99 USD. Words: 95,330. Language: English. Published: September 11, 2014. Categories: Nonfiction » Religion & Spirituality » Biblical Criticism & Interpretation / General, Nonfiction » Religion & Spirituality » Biblical Criticism & Interpretation / Old Testament
In this book, we complete our ill-fated trip through the rest of the Old Testament and its endless supply of prophecies. From Ezra to Ezekiel, from Job to Jonah, and from soup to nuts, we will witness what happens when a prophetic record is broken waaay too many times. WARNING: Not recommended for reading by religious Christians. Last Updated: January 15, 2018 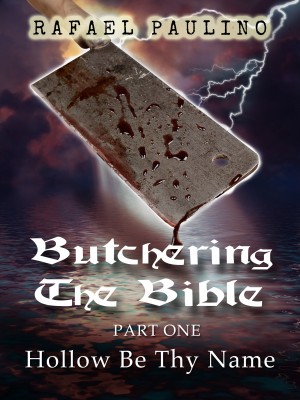 Butchering The Bible Part One: Hollow Be Thy Name by Rafael Paulino
Series: Butchering the Bible. Price: $2.99 USD. Words: 127,920. Language: American English. Published: March 21, 2014. Categories: Nonfiction » Religion & Spirituality » Biblical Criticism & Interpretation / Old Testament
This book explores the material contained in the first fourteen books of the Old Testament of the Christian Bible (i.e. from the Creation to the Babylonian Captivity), as recounted by an atheist wielding a literary meat cleaver. WARNING: Not recommended for reading by religious Christians. Last Updated: January 15, 2018