Published 2014-01-01.
Do you remember the first story you ever wrote?
My parents still have it somewhere around the house, I believe. Apparently I wrote the entire thing backwards, from the bottom right corner up! I can't say I remember it myself, though.
When did you first start writing?
I first came into writing as a hobby in middle school. I fell into a crowd: a crowd of writers! The girls would write novel-length stories in spiral-bound journals (or at least start them) and trade them back and forth, comparing their writing. Let's just say my early attempts shall remain hidden--there might be a 300+ page handwritten story that never quite developed a real plot somewhere out there. What can I say? I was 13 when I started it. I've come a long way since then!

Later we all got into anime, and by high school I decided to try my hand at fanfiction. I wrote several book-length fanfics under an old pen name during high school and early college, posting them on Geocities (they're long gone now, I'm afraid). It wasn't until a few years after college that I decided to turn my old love into a professional venture.
Who are your favorite authors?
Always a difficult choice, since I've read so many fantastic authors' works. Some of my favorites are Michelle Sagara, Karin Lowachee, Nalini Singh, Anne McCaffrey, Tamora Pierce, Robin McKinley, Brandon Sanderson, Robin Hobb, Pierce Anthony, and Lisa Shearin.
What do you read for pleasure?
Fantasy in all its forms--contemporary fantasy, urban fantasy, high fantasy, epic fantasy, paranormal romance, you name it! I also like science fiction and the occasional psychological horror, but my heart lies with fantasy, especially stories that blend unique magic with modern-day worlds.
When you're not writing, how do you spend your time?
Besides the day job? I read a lot, and I blog. I also play Dungeons and Dragons or other tabletop roleplaying games. I've got a game closet with (a-hem) games in it, and try to lure innocent friends into board game nights. When I'm not doing any of those, I play on the Internet, go on hikes, ride horses, or watch Doctor Who on Netflix.

For the day job, though, I'm an editorial assistant at a company that develops educational assessment tools. My primary duties are copy editing, which is fantastic for the writing, and offering feedback on the readability and possible grammatical contexts of materials for different age ranges. Since I love grammar, and a good challenge, I enjoy my job.
How do you approach cover design?
My grandfather was a watercolor artist, and when I was a small child he began to instill the basics of art in me. While I eventually decided to go the written route instead of painting, I still remember the lessons he gave me, and the time we spent drawing together. So when I decided to self-publish, I knew I wanted to try my hand at creating my cover.

The first thing I did was look over the top 100 bestselling books in the urban fantasy genre on Amazon--plus the top 100 in young adult fantasy, fantasy, paranormal romance, and horror! This gave me a feel for what was selling, and what I liked and didn't like in covers.

I decided I wanted to avoid too much visual clutter, so that meant finding a background, a cover model, and something to create visual motion--and not much else. When designing the cover for Into the Tides, I looked for three things: a woman with a sense of movement in her pose, butterflies, and oil rigs and water for the background. I ended up with four basic pictures, two of which were blended together to create the final background.

As I knew the story has strong magical elements, I wanted to give it all a sense of unearthliness, so I chose to set everything in a blue-themed color scheme to bring out the sense of unreality and to fit with the tone of the book. In the end I couldn't get all the pieces to blend smoothly, so I asked a friend with Photoshop to put it all together for me. What she created was even better than I imagined!
How do you discover the ebooks you read?
I usually buy books by authors recommended to me by friends, written by authors I've met, or written by authors I already know I love. When I go browsing for something completely new, I'll look for an interesting title or search by keywords based on whatever meets my current fancy. I'll then read the blurbs until I find one I want to try.
What is your e-reading device of choice?
I work all day at a computer, and then I go home and write on a computer. Because of this I looked for an e-reader with e-ink, something that would give my eyes a break. I went with a Nook Simple Touch, which works great even after several years of purse-abuse.
What motivated you to become an indie author?
Although I have a reputation for being highly creative, I'm also a pretty analytical person. When I decided to write professionally, I had no idea what to do (really, none). So I began to research. I started a blog about six months into my writing journey and began doing every-other-week summaries of the latest publishing news and helpful industry blogs I had found over the two week period. At the time, e-publishing was just making its debut.

Over the next three years, the publishing industry transformed. I would like to eventually have being an author as my only profession, so I looked to the long-term. Analyzing the market told me that I stood a good chance of doing better as an indie author (I rather like math), so I saved up for a professional edit and investigated the best practices of indie publishing. Although I expect a longer period before I start seeing a return on investment than if I'd gone traditionally, I thought I'd have a better chance of reaching my final life goal (being able to be a full-time author) in the long run.
What is the greatest joy of writing for you?
Nothing beats the thrill of creation. A single idea, planted and allowed to bloom, grows into a story, sprouting around it the world to which it belongs, the people within, the cultures and aspects of the world based on its unique structures... It's a breathtaking, soul-deep experience to watch an entire world come to life.
Smashwords Interviews are created by the profiled author or publisher. 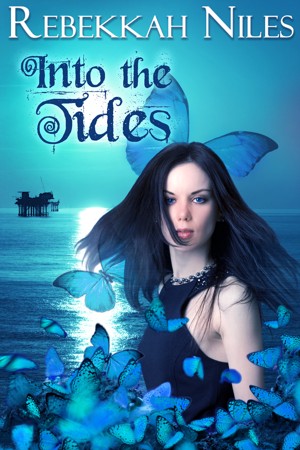 Into the Tides by Rebekkah Niles
Price: $3.99 USD. Words: 84,390. Language: American English. Published: January 5, 2014. Categories: Fiction » Fantasy » Contemporary, Fiction » Fantasy » Urban
Tone-deaf Kelly has long considered her inborn music magic to be useless. But after a disaster drowns the American South in magic, including most of her family, she discovers her “useless” magic lets her hear the voices of those lost. Now she’ll face magic itself to save them–only the attempt may cost her everyone she has left.