Published 2018-06-03.
Describe Mr Wainwright's desk...
A plain wooden bench, about four feet by two with one drawer. I believe the desk originally came from HMS Lodestar, on which he served in the Atlantic and Arctic. On the desk was notepaper and an Underwood No.1 typewriter.

The desk was in Wainwright’s attic studio. It was at the top of a rather crowded house full of lodgers, and it seemed to be the only room in the place that was his. With not even a bed, it was clear he did not live there, and as I got to know him more I discovered it was only a place he would visit while he was in London. To this day though, I still don’t know where it was he retired to when out of the city, and have only the vaguest knowledge of his family.

The studio was small, with bookshelves stacked as high as the slanting ceiling would allow, a roaring fire, two cosy armchairs and a writing desk by the window.
Where did Mr Wainwright grow up, and how did this influence his writing?
Sidney Wainwright's place of birth is unknown. What I do know is that the dark tales of folklore and local legend that he grew up with left a deep and lasting impression on him.
When did Mr Wainwright first start writing?
Although it appears Sidney Wainwright had been a dabbler in fiction and poetry for many years, he first started to put his tales to paper during his time at sea during the Second World War.
What's the story behind Mr Wainwright's latest book?
'After Midnight' is a collection of tales of mystery and the macabre. The stories in this collection, penned by Wainwright in the 1940’s and 1950s from his travels and investigations in the first half of the twentieth century, draw on the folklore of the places in Britain that he travelled to during that period.
What motivated you to publish Sidney Wainwright's stories?
The time is now right for the works of my old friend Sidney Wainwright to be made public. The secrets of his past, will now progressively be allowed to be revealed.
What was the greatest joy of writing for Mr Wainwright?
Sidney Wainwright always said he enjoyed "making people feel, in order to make them think".
What works by Mr Wainwright will be published next?
A series of Dystopian novels that came very close to coming true.
Who are Mr Wainwright's favorite authors?
From what I know Sidney Wainwright was always a fan of Jane Austen as well as the works of Sir Arthur Conan Doyle.
Do you know the first story Mr Wainwright ever wrote?
Sidney Wainwright's first story was a story about a window, the window in his room at the top of his house where he grew up. That story was about what the window kept hidden and, eventually, what it revealed.
What was Mr Wainwright's writing process?
Travelling, and letting the story find him before he would craft it into shape.
Do you remember the first story Sidney Wainwright ever told you, and the impact it had on you?
I remember the first story Sidney Wainwright ever told me. It is from his 'After Midnight' collection and is about the murder of an Unknown Soldier on the road from London to the coast. I remember it achieved just what he wanted, it made me feel, and then it made me think.
Smashwords Interviews are created by the profiled author or publisher. 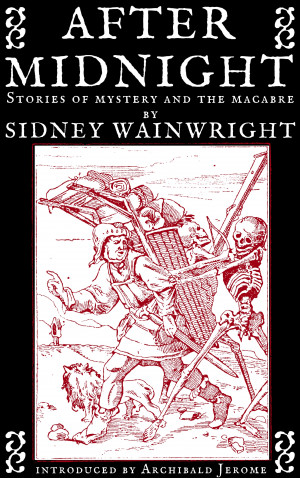 “Anything can happen in the dark…” After Midnight is a collection of gothic short stories based on the folk legends and cautionary tales of the unknown. The digital edition of After Midnight is free in most territories. However, if you enjoy the collection the creators of Sidney Wainwright would appreciate your patronage at: https://ko-fi.com/sidneywainwright