This interview has been viewed 397 times.

Published 2014-05-22.
What motivated you to become an indie author?
I want to be close with my readership. I want to have complete control over my product, for better or worse. If people like my books, they'll read them, and that's all. I do my best to get the word out, but ultimately what's going to make my books known is whether or not people like them. I hope I fall on the "love it" side of people talking about my books, rather than the "what the hell was she thinking" side.
What is your writing process?
I usually start with the very kernel of an idea. Something about a story I hear or a documentary I watch will appeal to me, and I'll say, "Huh. I can do something with that." Then I spend a while scribbling all over a notebook trying to think of what exactly to do with that kernel. I almost always start with characters, because that's easiest for me. I love creating new people, and sometimes I end up with a cast of characters with no story to participate in. But that's the next step! I try to have at least a vague idea of where the story is going before I start to write. I used to just wing it, but I got really tired of finishing and then looking back and realizing I had to rewrite the whole thing.
Do you remember the first story you ever wrote?
Probably Gundam fanfiction. The first "original" thing I ever wrote was probably when I was maybe 13, and it was a story about angels that was a blatant ripoff of The Prophecy. It even had the scene where the guy crawls out of Hell in the parking lot. So bad. So, so bad.
Do you remember the first story you ever read, and the impact it had on you?
One of the oldest stories I remember is a fairy tale I loved out of this big compendium I had. I think it was called The Dragon and the Monkey. Basically the dragon's wife asked him for a monkey heart to eat, and said she would die without it. So he went to find this monkey, and told him there were much more awesome fruits or whatever across the river, and that he would give him a lift across. Halfway there the dragon admits his plan, and the monkey says, "Your poor wife! Why didn't you say so? Don't you know monkeys don't carry their hearts with them? Take me back to my tree and I'll get it for you." So the dragon does, and of course the monkey is full of shit and just hides in his tree where the dragon can't get him, and I guess the assumption is that the wife dies, but the story ends there.

I don't know why it stuck with me. I guess because it's one of those "animals being clever" stories that I always liked, like Anansi or Coyote or that one about the scorpion and the frog. Folk tales are awesome.
What are your five favorite books, and why?
This is the worst possible question. Here goes, in no particular order.

Crime and Punishment. I've read this at least half a dozen times. Raskolnikov is so fascinating. He's definitely insane, but trying to work through and figure out his mental process is 90% of the fun of the book. Under it all, is he a good guy or a bad guy? He killed those people, but then he gives money away all the time, and then he curses himself for doing it? I don't get it, but I want to.

The Count of Monte Cristo. This is just such a great adventure story. I actually saw the movie first, the one with Jim Caviezel, and I liked it, so I read the book and holy crap, so much better.

1984. This was the first dystopian book I read, and it really stuck with me. It introduced me to the whole concept of dystopia, which is now one of my favorite things.

Aztec, by Gary Jennings. This massive book is awesome. I have a real love for Precolumbian Central America, and aside from being a good story, this book has a ton of historical tidbits that I just ate up.

The War of the Worlds. This is another one that just stuck with me for whatever reason. I think it was how tense and not-tense it was at the same time. Plus, I mean, heat rays. Come on.
Describe your desk
I don't really have a desk. I have a laptop. I'm either in bed with it, or I'm on the couch while my husband plays games. But I change my backgrounds a lot? Right now it's Edward from Black Flag. Sometimes I write while I'm at my day job, but my desk there is just full of office supplies and file folders, so not very relevant to the creative process.
When you're not writing, how do you spend your time?
I play a lot of video games. I mean, a lot. I love Assassin's Creed, Mass Effect, Dragon Age, XCOM, Final Fantasy, Civilization, Starcraft--I could go on. I also spend as much time with my daughter as possible. (But I mean, she's a baby. She has an early bedtime. Video games it is!) I get my reading done in the bath or in bed. Sometimes I even spend time plotting or making notes on the next project.
What is the greatest joy of writing for you?
You spend all this time pondering and planning and writing and rewriting and pondering some more, and you really put your all into your work. When you have a finished product, it feels great. But the best moment is the first time someone else has your book in their hands and they're talking to you about your characters as if they're real. They aren't just in my head anymore--they're in the other person's, too. From that moment on, the character has new perspectives, new potential motivations, even new details about their physical appearance. And that's awesome.
Who are your favorite authors?
I love Dumas and Dostoevsky. On a more modern note, I really love Rick Riordan. I love the way he's able to make these awesome, badass adventures, and they're always funny when they should be funny and touching when they should be touching. He writes YA novels, but they hold my attention as well as any "grownup" novel.
What inspires you to get out of bed each day?
My daughter. If not for her, I'd probably be much lazier. I have a day job so that she can have all the things she needs and most of the things she wants, and I keep writing because I want her to know that you can always find time to pursue your dreams.
What do you read for pleasure?
I read a lot of history, actually. I read novels, usually some kind of dystopia, but I read a lot about Precolumbian Central America. I'm kind of a nerd for it, which sucks a little bit, because relatively few people are. It's a fascinating subject, and you know I can't get enough of those gruesome human sacrifice stories.
Smashwords Interviews are created by the profiled author or publisher. 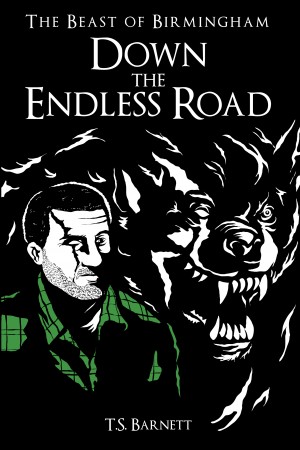 Down the Endless Road by T.S. Barnett
Series: The Beast of Birmingham. Price: $2.99 USD. Words: 77,600. Language: English. Published: February 27, 2015. Categories: Fiction » Fantasy » Paranormal, Fiction » Thriller & suspense » General
Chaos brews just under the surface of Europe after Adam Weiss’s surprise attack against the Wolfjäger. Desperate for progress, Alicia joins up with a ragtag group of equally impatient special agents, who will show the werewolves what it really feels like to be hunted. Adam has problems even without the vigilantes’ interference, and his schemes might earn him more enemies than he expected. 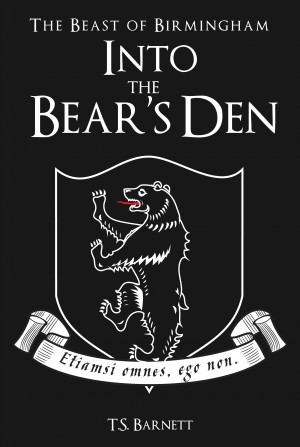 Into the Bear's Den by T.S. Barnett
Series: The Beast of Birmingham, Book 2. Price: $2.99 USD. Words: 84,690. Language: American English. Published: May 27, 2014. Categories: Fiction » Fantasy » Paranormal, Fiction » Thriller & suspense » Action & suspense
In Germany, there is no such thing as freedom for werewolves. From the moment they’re bitten, they are tagged, filed, and monitored. It should be a hunter’s dream. All Alicia wants is to lay hands on Sam, the cause of her hate and the source of her nightmares, but his legend is finding an international stage. 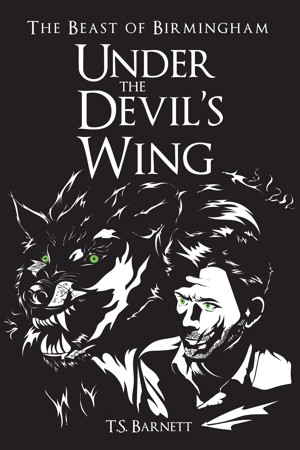 Under the Devil's Wing by T.S. Barnett
Series: The Beast of Birmingham, Book 1. Price: Free! Words: 72,300. Language: English. Published: April 2, 2014. Categories: Fiction » Fantasy » Paranormal, Fiction » Horror » General
Sam is a werewolf without a cause. He only looks as far ahead as the next drink, the next woman, and the next good time, no matter what he leaves in his wake—mostly bodies and bitter progeny. Alicia is the one who got away. After barely surviving a night of Sam’s affections, she’s picking up the pieces when she’s approached by a mysterious man with an offer—hunt down the the creature who did it.