Published 2013-09-16.
What's the story behind your latest book?
My latest book is 'Freedom from Bosses Forever' and it is the book I'm most satisfied with and has the most fabulous reviews. It is third time lucky with this book really as it started off as a book called 'Stripping for Freedom' which I've improved and updated twice to get this ebook - 'Freedom from Bosses Forever'. It has been called the 'funniest and best business book' and 'full of absolute business truths'. But I'm just pleased that by writing it as a funny story people are reading it from beginning to end and benefiting from all the proven and practical 'Be Your Own Boss' tips.
What motivated you to become an indie author?
I have written and will continue to write books for major publishers but I know that many are not adventurous. A humorous and satirical business book written from the point of view of a mythical, female, investigative and fashion journalist isn't what any publishers i know would go for. Now it's selling really well they might. It was a case of do it yourself or forget the project and I wanted to write a useful 'Be Your Own Boss' guide for people that wouldn't normally read a business book. 'Freedom from Bosses Forever' is unique and I'm proud that I decided to do it as an indie.
How has Smashwords contributed to your success?
Smashwords is awesome. I didn't know that it existed until my Writer's VA, Jo Harrison, told me about how it could bring 'Freedom from Bosses Forever' to a new audience of prospective and existing business owners around the world. It has really done that and I'm impressed.
What is the greatest joy of writing for you?
Finishing it then holding one's breath in anticipation before reading the reviews of real readers. If it makes them laugh or makes them think then it has all been worthwhile. I'm 61 but I'm still learning my craft after 30 years of writing. The joy is when a reader's comments show that what you intended to create they get and like.
What do your fans mean to you?
With 'Freedom from Bosses Forever' the mythical Soculitherz (known by a single name like celebrities such as Beyonce, Cher, Rihanna, Madonna and Batman) has far more fans than I have. However I'm very grateful for any fans as she says such terrible things about me that these fans are very far-seeing, knowledgeable and wonderful people.
What are you working on next?
I'm working on a novel called 'Loose Cannon' which is about a group of friends that have been waging a war against corrupt executives and politicians, for nearly 30 years. They have remained totally under the radar of the authorities. Now one of their number is dyingand is taking risks which the others are finding difficult to deal with. An alternative title might be 'Guilty Secret's'. It is a psychological thriller with a knock-out ending. .
Who are your favorite authors?
PG Wodehouse, Miles Kington, Emily Bronte, Charles Dickens, Jonathan Swift and Herman Melville.
What inspires you to get out of bed each day?
I'm running out of time. I want to write as much as I can and help as many self employed and business owners to survive and thrive as I can.
When you're not writing, how do you spend your time?
I split any remaining time between running and expanding the global community of micro enterprise owners that I co-founded (the Enterprise Rockers) and watching sport and live entertainment (theatre, concerts, gigs and cinema) with my family and friends.
Do you remember the first story you ever wrote?
Yes. It was a play called 'No' and it was very acidic. It was kind of Osborne and Pinter style and it descended into domestic violence. It started with an fierce argument between the father and mother over pork for dinner. That bit was taken from real life.
Smashwords Interviews are created by the profiled author or publisher. 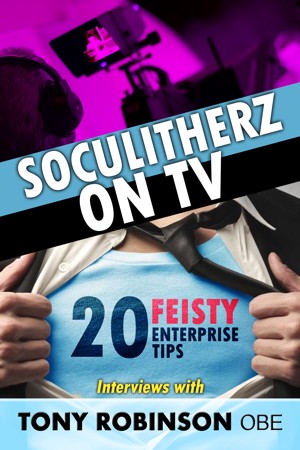