Published 2019-03-02.
Who are your favorite authors?
Terry Pratchett, Neil Gaiman, Tom Robbins and Douglas Adams. I will probably re-read every Pratchett book 5 times before I die. Anything from Gaiman gets gobbled up uberfast... and then gobbled again.
What inspires you to get out of bed each day?
My love of my family and my love of what I do make me ready for the day. I talk about the phrase "live the world" as the theme of my writing, but it's also the theme for my life. My wife, son, and daughter motivate me and inspire me every day. And it's a joy to spend my day doing what I love: telling stories and being a dad and husband.
When you're not writing, how do you spend your time?
I once saw somewhere that every writer should have something to do with their hands other than write. For me, that's cooking and homebrewing. When I'm not writing, I'm often in the kitchen, cooking and baking from scratch. Nothing gourmet, either; just good, honest, simple everyday food. It might be Northwest one day and Thai the next, but it's made by hand and made with love, and I get lots of satisfaction out of cooking for my family.
What do you read for pleasure?
Fantasy fiction. Harry Potter, Discworld, anything Neil Gaiman, Lukyanenko's Nightwatch series, and such.
How do you discover the ebooks you read?
Mostly through the recommendations of friends and colleagues, as well as podcasts such as Q, The Creative Penn, and The Sword and Laser. My local library also runs a great e-book program, and I often use their site too to find a great book to read.
Do you remember the first story you ever wrote?
Oh man, that's a while back. I think I've been scribbling stories and poems pretty much since I could hold a pen. The first story I wrote that really sticks out to me though is when I was in middle school. I was 13 when I knew that words would be my career. At the time my tastes tended much toward horror, and that first story had a pretty visceral depiction of a teenage guy being hit by a car. I don't recall if it was good writing, but I do recall that it got a reaction—and that in itself was quite informative.
What is your writing process?
As the old saying goes, "the map is not the territory."

I write like I travel. I've been to about 10 countries, and while I always have some ideas of where I'm going and what I want to see, I also leave myself open to changing course depending on the actual day and route.

For me, writing is the same. I need a plan for my stories, and I outline the action, emotions and theme not just for the story, but for every single scene. At the same time, I follow the story where it takes me. The planning helps me surrender to the path.

This process means I have some serious ramp-up time before I start drafting, but once I'm drafting, I can crank out a thorough, revised, dang-near-polished scene within a couple of hours.
How do you approach cover design?
I'm a firm believer in "aces in their places." I can barely crop a photo, so I would never waste my time making a cover. Instead, I work with an awesome graphic designer. She's also one of my Beta Readers, so she also knows the story inside and out. We discuss concepts and theme, then I get the hell out of her way. She later comes to me with, say, 3-5 overall drafts, and from there we narrow it down to the final cover.
What is your e-reading device of choice?
I adore my Kindle Paperwhite and take it pretty much everywhere. I do also read through the Kindle app on my iPod Touch, and I'm looking to snag a Kobo reader as well. I love reading e-books. Also, on nights when I'm helping my son get to sleep, I can read e-books in the dark. That makes toddler bedtime much easier!

It's also important to me to experience other's stories and my own stories the same way my readers do, so reading on a device also puts me more in the reader's world when I'm getting a story ready for release. I like to think it helps keep me real.
What are you working on next?
The fifth Rucksack Universe book, WANDER, came out in 2018. That books has marked a huge evolution in my world and storytelling.

The sixth book, Cloud Fortress, is currently with my Chief Reader. During 2019 I'm really focused on short fiction set in the Rucksack Universe, while I also plan more novels.
Smashwords Interviews are created by the profiled author or publisher. 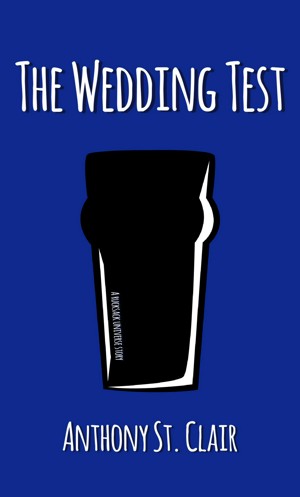 The Wedding Test: A Rucksack Universe Story by Anthony St. Clair
Price: $0.99 USD. Words: 4,390. Language: English. Published: June 18, 2021. Categories: Fiction » Visionary & metaphysical, Fiction » Science fiction » General
Get married in the pub… if you can open the doors. “Whisky and Weddings Since 1 A.B.,” proclaimed the sandwich board on the black and gray cobbles under the overcast, muggy, Scottish summer sky. “Walk-ins welcome!” The couple makes their way hand in hand, ready to tie the knot. But the Dram Ring Pub and Wedding Chapel’s doors stay stuck shut. Is it a test… or a sign? 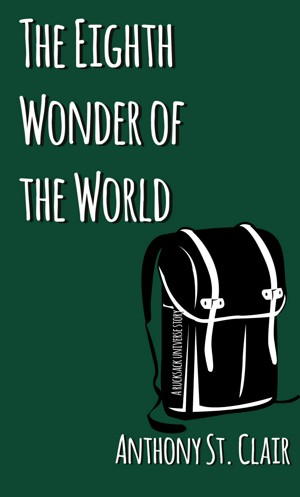 The Eighth Wonder of the World: A Rucksack Universe Story by Anthony St. Clair
Price: $0.99 USD. Words: 8,680. Language: English. Published: May 19, 2021. Categories: Fiction » Science fiction » General, Fiction » Fantasy » General
Banter. Travel. A short jaunt into the heart of meaning and purpose. If you like decisive women and yearn for a new type of hero, then get ready for a trip to “The Eighth Wonder of the World.” 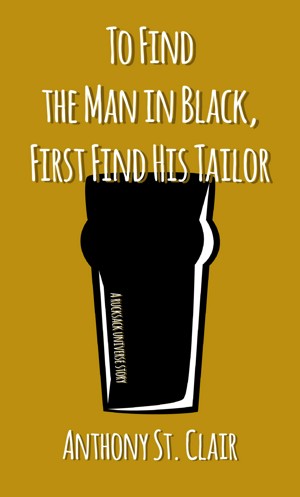 To Find the Man in Black, First Find His Tailor: A Rucksack Universe Story by Anthony St. Clair
Price: $2.99 USD. Words: 10,960. Language: English. Published: April 19, 2021. Categories: Fiction » Visionary & metaphysical, Fiction » Science fiction » General
Finally. Proof. In the Mexico City night, the cops freed the prisoners and locked up their torturers. Nearby, the reporter picked up a torn scrap of fabric. What looks like plain black silk turns out to be covered in subtle yet intricate patterns. The scrap in her hand could be the first piece in a puzzle unsolved for thousands of years. Such a shame she has to give it up. 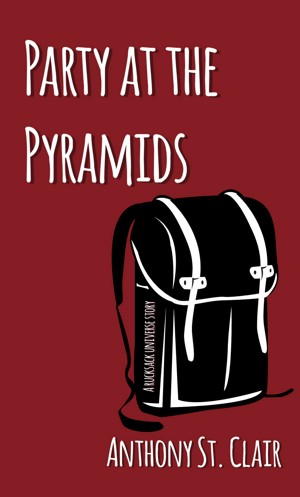 Party at the Pyramids: A Rucksack Universe Story by Anthony St. Clair
Price: $2.99 USD. Words: 12,250. Language: English. Published: March 19, 2021. Categories: Fiction » Visionary & metaphysical, Fiction » Coming of age
After leaving her native Ireland nearly a decade ago on her sixteenth birthday, Aisling has traveled the world in pursuit of one goal: Make her own destiny, on her terms, and become known as the greatest fiddler in the world in the process. Now, in Cairo, Egypt, at an impromptu party at the pyramids, a man shows up and offers her the world. If only her past hadn't turned up too. 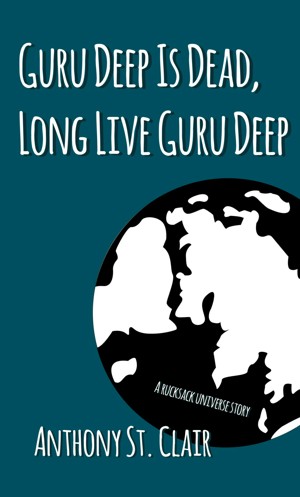 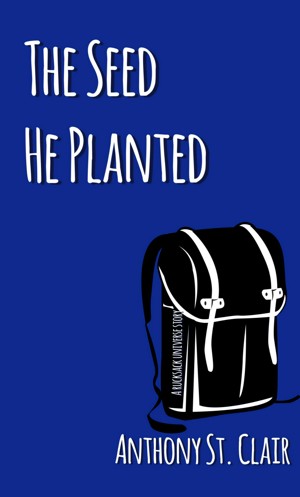 The Seed He Planted: A Rucksack Universe Story by Anthony St. Clair
Price: $2.99 USD. Words: 10,160. Language: English. Published: January 19, 2021. Categories: Fiction » Fantasy » Short stories, Fiction » Science fiction » General
An ugly satchel holds an uglier truth. Nia Fox gave up everything for Guru Deep, so the perfect CEO could have the perfect executive assistant at his beck and call, every moment. Nia loves working for Guru Deep. He sees a path for the future that few comprehend. She knows today’s groundbreaking ceremony for the Lotus, the new company headquarters in south London, dominates Guru Deep’s thoughts. 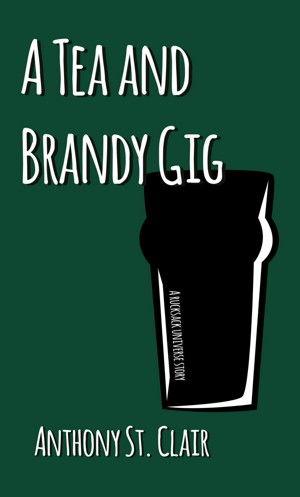 A Tea and Brandy Gig: A Rucksack Universe Story by Anthony St. Clair
Price: $2.99 USD. Words: 8,940. Language: English. Published: December 19, 2020. Categories: Fiction » Science fiction » Short stories, Fiction » Fantasy » Short stories
The trouble is, kindness is trouble. Disgraced. Jobless. Kicked out of the butler’s guild. Pennyton believed he had done the right thing. The kind thing. Look where that got him. Yet when he answers a surprise knock on his door, Pennyton finds himself where he least expected: on a one-night gig driving a carriage for a rich journalist who paid in full and up front. 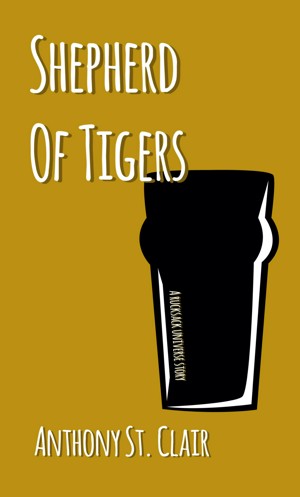 Shepherd of Tigers: A Rucksack Universe Story by Anthony St. Clair
Price: $2.99 USD. Words: 14,330. Language: English. Published: November 19, 2020. Categories: Fiction » Fantasy » Short stories, Fiction » Science fiction » Short stories
The truth sleeps Aednat had nothing but her family, until The Blast took them and everything Aednet knew of home in Ireland. Aednat finds herself in France, with people who seem more like myths, in a rich world unlike anywhere she ever dreamed of belonging. Yet in caves in Ireland, strange images from the past tell the tale of a present unfolding in fire... 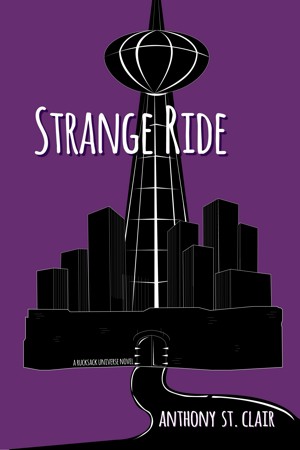 Strange Ride: A Rucksack Universe Novel by Anthony St. Clair
Price: $4.99 USD. Words: 89,410. Language: English. Published: October 19, 2020. Categories: Fiction » Fantasy » Urban, Fiction » Science fiction » General
Lost parents. An unescapable city. A daughter who will not stop. Soarsha wants 3 things for her tenth birthday: sushi, chocolate cake, and listening to Wandering Heroes with her dad. Yeah, she wishes her classmates would stop tormenting her. Especially after she sneezed during her bully’s sharing time. Better to let the shadow monster eat her. And when her father goes missing, she might have to. 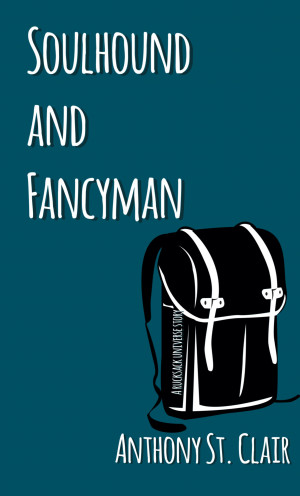 Soulhound and Fancyman: A Rucksack Universe Story by Anthony St. Clair
Price: $2.99 USD. Words: 7,930. Language: English. Published: September 19, 2020. Categories: Fiction » Fantasy » General, Fiction » Alternative history
Good dog. Bad man. Highlow will never understand humans. Not even his wonderful sausage-giving Master. Humans smell through their eyes, talk instead of sniffing arses, and believe there's a maximum number of sausages a dog should eat at one time. What Highlow really doesn't understand, though, is the strange, hard, round thing he finds near the Black Cliffs of Dover...
View their profile to see all of their books