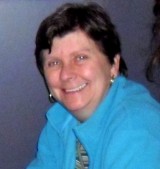 Published 2015-10-15.
Who are your favorite authors?
This changes as I find new ones. Right now I am reading Juliet Marillier, Kevin Hearne, James Oswald, just about anything by Brandon Sanderson, Jim Butcher and Robin Hobb.
When you're not writing, how do you spend your time?
I love being in the garden, digging in the dirt. I am an organic gardener. I grow vegetables, herbs and flowers. In the winter I dabble in genealogy.
How do you discover the ebooks you read?
I get emails from GoodReads and Amazon that help. Sometimes I scroll through Smashwords. Sometimes I use recommendations from other author or review sites.
Do you remember the first story you ever wrote?
I believe it was fan fiction involving a rock group that I won't name because then you will realize how old I am. But it was a piece of fan fiction trying to blend Dr. Who with the original Star Trek that taught me that you can not have 2 heroes in a story.
What is your writing process?
I write down the bones front to back and then flesh it out. Sometimes, once the bones are there, I can see more readily what's missing. Sometimes I will have my first reader take a look before I make any fixes, because it's possible that what I think needs fixing isn't what a reader needs fixed
What do you read for pleasure?
Mostly fantasy, a little science fiction and the occasional mystery. I love a smaller story these days. The monumental fight against evil and the reluctant messiah stories have gotten a little stale for me. I really enjoyed the Tanyth Fairport books by Nathan Lowell. They are completely character driven.
What is your e-reading device of choice?
Kindle Fire, but it's a little heavy. I liked my first Kindle for weight.
Describe your desk
I like my desk to be very neat. I have a small glass top desk with a laptop on it. Only the work I am doing gets to be on the desk. I stack everything else to the side.
Where did you grow up, and how did this influence your writing?
I grew up in New Jersey, in what we called "the greater metropolitan area", which meant we got NY television. It's a strange state separated into several distinct regions - North, South, the beach, the pine barrens and the western bit which is essentially a suburb of Philadelphia. The town I grew up in is lovely for adults. I thought it was the most boring place on the planet when I was in high school. That made me want to wander, to see what else was out there. Travel and coming home, driving cross country and settling elsewhere has all helped to give me insight into people that are not like me. I think that enriches my stories with believable characters.
What motivated you to become an indie author?
I've always been a do-it-yourselfer. When I found out that I could do it all myself I was very excited. I had gone the route of querying agents, and truthfully, I wasn't ready then. But when I was ready, the industry had changed so much that I felt I could self publish, and did so happily.
What is the greatest joy of writing for you?
When people enjoy the story. The first time someone asked me about a character I was nonplussed. Something from inside my head was public! A person I had made up had made an impression on someone. It was an amazing feeling.
Smashwords Interviews are created by the profiled author or publisher. 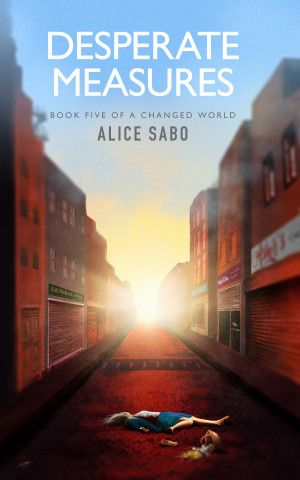 Desperate Measures by Alice Sabo
Series: A Changed World. Price: $2.99 USD. Words: 48,210. Language: English. Published: June 30, 2019. Categories: Fiction » Science fiction » Apocalyptic, Fiction » Science fiction » General
The stability of the Survivor’s Alliance is still fragile. They made it through the winter, but now it’s flu season. Tillie and Angus try to prepare for every scenario, even the possibility that they will be the first to go. Nick works to bridge the gap until the spring crops come in. Wisp and Bridget are preparing for the birth of their child. But there are changes coming that no one expected. 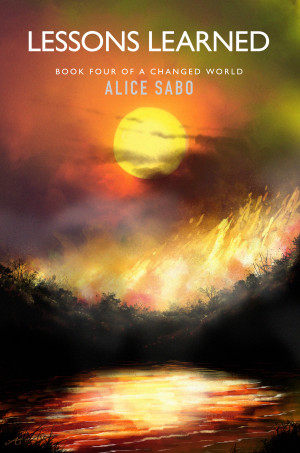 Lessons Learned by Alice Sabo
Series: A Changed World. Price: $3.99 USD. Words: 57,170. Language: English. Published: June 29, 2019. Categories: Fiction » Science fiction » Apocalyptic, Fiction » Science fiction » General
The president arrives at High Meadow with his entourage of bureaucrats and faux-military. Tillie and Angus don’t have time for any distractions as a massive wildfire bears down on their settlement. At a time when they most need to work together, the outsiders are creating divisiveness. It will take more than hard work and good intentions to get them through this catastrophe. 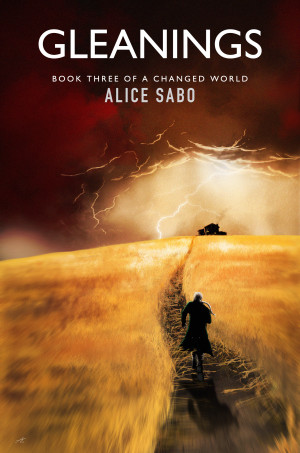 Gleanings by Alice Sabo
Series: A Changed World. Price: $3.99 USD. Words: 74,520. Language: English. Published: June 29, 2019. Categories: Fiction » Science fiction » Apocalyptic, Fiction » Science fiction » General
As starving people overrun High Meadow, Tillie and Angus must do a delicate dance to keep the doors open. Angus has set the new boundaries. Martin works to keep it safe. Tillie struggles to get everyone fed while keeping an eye on the stores for winter. Within the flood of people, not all are who they seem to be. The people of High Meadow need to prepare for war or lose what they cherish most. 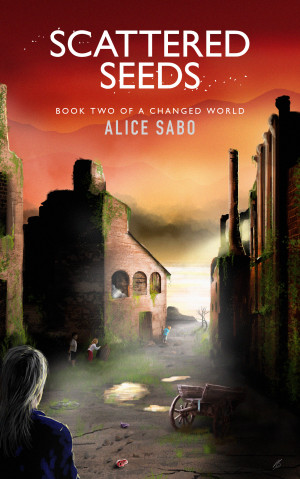 Scattered Seeds by Alice Sabo
Series: A Changed World. Price: $3.99 USD. Words: 84,450. Language: English. Published: June 29, 2019. Categories: Fiction » Science fiction » Apocalyptic, Fiction » Science fiction » General
As High Meadow deals with troublemakers, Wisp sets out to rescue Nick. In the search for answers, Nick discovers the country’s infrastructure is teetering on the brink of collapse. Angus predicts that the high mortality rate from flu could cause disruptions causing people to flee. Tillie scrambles to plan for winter without train food. They once more have to learn how to live in a changed world 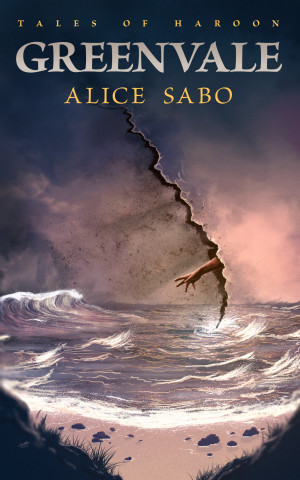 Greenvale by Alice Sabo
Series: Tales of Haroon. Price: $2.99 USD. Words: 49,680. Language: English. Published: June 27, 2019. Categories: Fiction » Fantasy » General, Fiction » Coming of age
For as far back as he could remember, Chance had been able to feel wrongness in the world. With that also came the ability to sense rightness, but that didn’t mean he could always fix it. And sometimes that knowing got him into a lot of trouble. When monsters and magic invade his simple life, Chance has to learn how to use his inborn abilities to keep safe those he cares about the most. 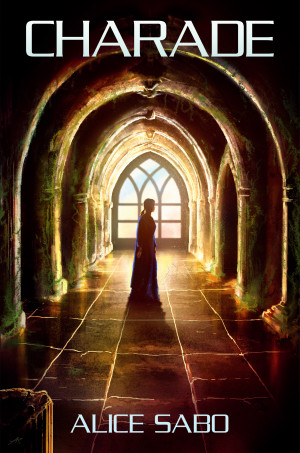 Charade by Alice Sabo
Series: Transmutation. Price: $3.99 USD. Words: 70,860. Language: English. Published: June 23, 2019. Categories: Fiction » Science fiction » Space opera, Fiction » Science fiction » General
As Elaan learns about who she is and what her species can do, the galactic government pressures her for more information on their enemy. Hunter and Trash want to reconnoiter the enemy’s territory, but they have to find it first. Hunter’s past endangers them all when a woman he’s never met makes revelations about his origins. 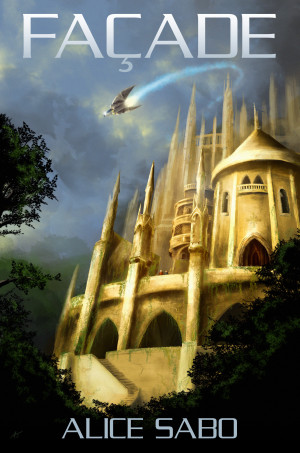 Facade by Alice Sabo
Series: Transmutation. Price: $3.99 USD. Words: 52,070. Language: English. Published: June 23, 2019. Categories: Fiction » Science fiction » Space opera, Fiction » Science fiction » General
An undercover assignment goes critical for Galactic Intelligence Agents Hunter and Trash when a peculiar encounter ends with a woman becoming deathly ill. They realize she is not one of the known species. When they take her to the Alleviators of Clouded Vale, the galaxy-renown healers who raised Hunter, things get even stranger. Their discovery has the potential to change the universe. 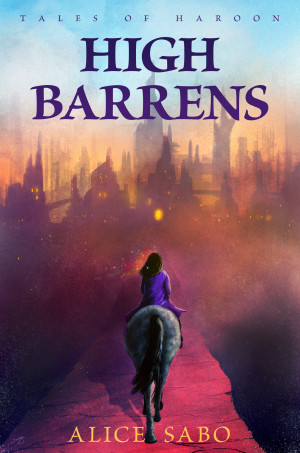 Flint thought that having six older brothers and growing up in a dangerous frontier town would prepare her for anything. She soon discovers that the world is a lot more complicated than she expected. It’s going to take more than a strong back and good intentions to achieve her goals when magic and monsters come into play. 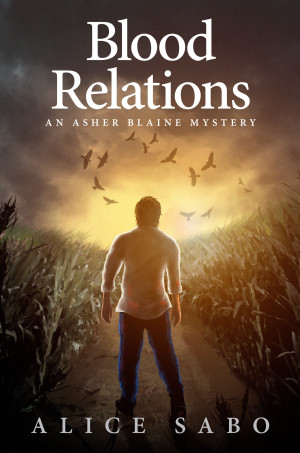 Blood Relations by Alice Sabo
Series: Asher Blaine Mystery, Book 3. Price: $2.99 USD. Words: 43,840. Language: English. Published: December 7, 2018. Categories: Fiction » Mystery & detective » Amateur sleuth, Fiction » Mystery & detective » General
Murder, suicide and a ghost from the Civil War. Asher’s stuck in a strange hotel in the middle of a cornfield, up to his neck in lies, deceit and bad coffee. When vultures start circling the cornfield, Asher fears a body is involved. A new guest checks in, and things get even more complicated. 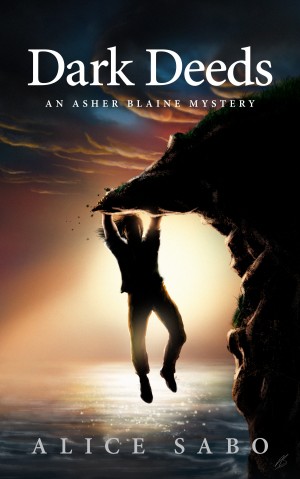 Dark Deeds by Alice Sabo
Series: Asher Blaine Mystery, Book 2. Price: $3.99 USD. Words: 54,660. Language: English. Published: May 15, 2015. Categories: Fiction » Mystery & detective » Amateur sleuth, Fiction » Mystery & detective » General
Asher's been sober for three years, and is about to star in a grand scale come-back movie. He's rented a cottage in the mountains of NC where they’ll be filming soon. On his first day he found a body in the woods. There are more dark deeds brewing. An explosion starts a wildfire in the woods behind his cottage. Then a rockslide pushes his car off the road. Is someone trying to kill him again?
View their profile to see all of their books