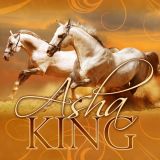 With the exception of my fairy tale inspired stories (Midsummer Suspense), all of my books came from a song title. Sometimes the subject of the song influences the storyline (like Near to You), while other times I merely take the title (Cats in Heat) and go from there. Usually within a series, the titles are all by the same artist (Stirling Falls are all Rolling Stones songs, for example).

Once I have the title and the premise, I dive right in and write. I try to write straight through until I finish the book, but sometimes I got a month or even a year before I get back to a particularly long book. My first draft usually resembles the later ones--I try to get things as "right" as possible the first time--and then go to my editor for review.
How do you approach cover design?
I do all my own covers and have since my first book was published. I go for simple, striking, and representative of the story. It's important to me to ensure the ethnicities of my characters are represented first and foremost.
What's the story behind your latest book?
My next release is SNOW: A Midsummer Suspense Tale. It's loosely based on Snow White.

I was talking to a writer friend, Darien Cox, about what I'd like to write, and I'd been hankering to do some interracial fairy tales but stumbled across other writers doing this. It seemed just as well, since--although I love and have written paranormal and fantasy--I prefer writing contemporary romantic suspense. Then something clicked in my head--wouldn't it be fun to write fairy tales but in a contemporary romantic suspense setting? Thus the town of Midsummer was born, first with Cinders (2014), then Beauty (2015), and now Snow (2015).

Of all the versions of Snow White, one of my favourites is Snow White: A Tale of Terror. In that version, the heroine's name is Liliana and the hero isn't the prince but one of the seven "dwarves" (miners). In my book Snow, I named my heroine Liliana after that version and the hero isn't the prince figure but the head of Seven Security, a group of seven people who work in the private sector, and he takes over as her bodyguard.
What motivated you to become an indie author?
I was with a small erotic romance publisher for about a year and a half, so I've seen both sides of it, and I strongly prefer self-publishing now. Sales with the publisher inexplicably dwindled the second year, and I ended up getting my rights back re-publishing my backlist myself along with new books. Now I still do my own covers, I still work with my regular editor, and I'm able to control prices and offer sales which has been great for my readers. No longer splitting the profits on books, I can offer longer novels at a lower price.
What are you working on next?
I have lots of romantic suspense on my plate this year. In June, I'm releasing The Book of Love, a novel about an elusive romance writer who is actually a thirty-something divorced man who no longer believes in happily ever afters and the spunky editor sent to ensure he delivers his next manuscript.

I'm also working on I Who Have Nothing, which has been in development for a couple of years now. It's about a man out for revenge against the guy who killed his father and how he stumbles upon his first love, now a blues singer, who broke his heart so many years ago.

Finally, toward the end of the year I'm hoping to continue my paranormal romance series Cats & Conjure, along with another Midsummer Suspense Tale.
When you're not writing, how do you spend your time?
I watch a LOT of TV. If I could just sit and watch Scandal all day while writing instead of go to work, I'd be a happy happy writer.
How do you discover the ebooks you read?
Recommendations from friends, new releases from favourite authors, and checking out books by those I meet on Twitter.
What do you read for pleasure?
I read a lot of thrillers and suspense books. Because I write exclusively romance now, I don't read it as much as I used to, and prefer to step away from the genre with dark thrillers.
What is your e-reading device of choice?
I love my Kindle!
Where did you grow up, and how did this influence your writing?
I grew up in a small town, which is why most of my books are set in such places.
Smashwords Interviews are created by the profiled author or publisher. 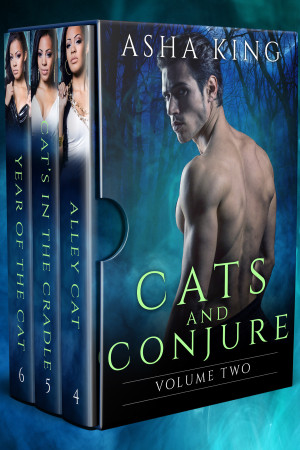 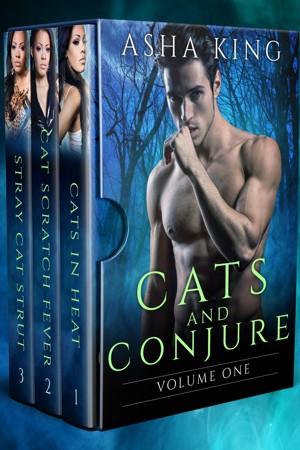 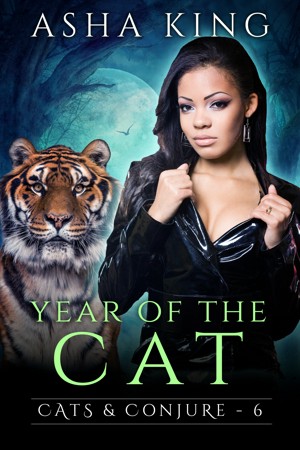 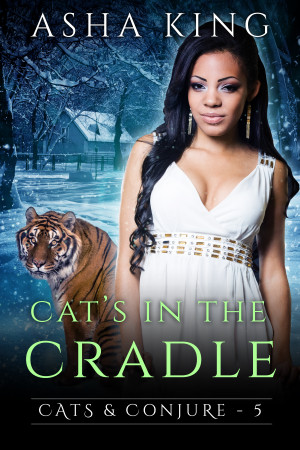 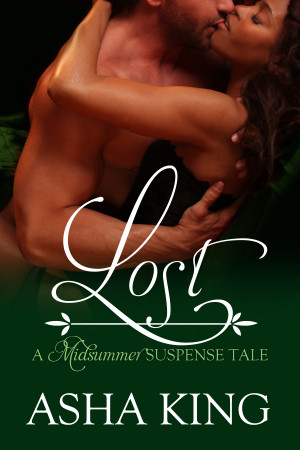 Lost by Asha King
Series: A Midsummer Suspense Tale. Price: $4.99 USD. Words: 44,120. Language: English. Published: March 24, 2017. Categories: Fiction » Romance » Suspense
Fifteen years ago, Greta Weaver was abducted and brought to a cabin of horrors deep in the forest. She escaped, but just barely.When Clive comes to her for help, she just wants to hide from the world, but can’t bear the thought of seeing a parent lose his children. She’ll have to confront her fears–and her past–if Clive is ever going to see his kids again. 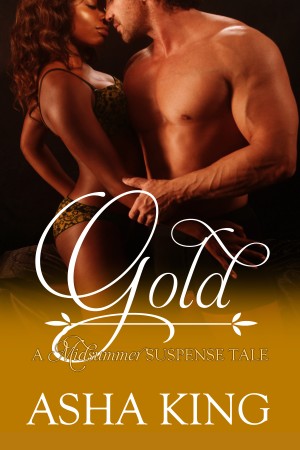 Gold by Asha King
Series: A Midsummer Suspense Tale. Price: $4.99 USD. Words: 50,330. Language: English. Published: May 27, 2016. Categories: Fiction » Romance » Suspense, Fiction » Erotica » Interracial
Kryssie Locke is known in criminal circles for spinning nothing into virtual gold, a reputation she built to save her life. She’s escaped at last, hunted by her former employers, and hiding out in a cabin in the woods seems might buy her some time. She never expected Gabe Ross, ex-con trying to stay out of prison, to find her in his bed... 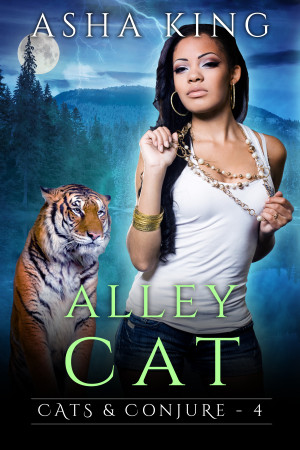 Alley Cat by Asha King
Series: Cats & Conjure. Price: $2.99 USD. Words: 30,390. Language: English. Published: March 4, 2016. Categories: Fiction » Romance » Paranormal » General, Fiction » Erotica » Interracial
Adelaide Deveraux has at last come into her powers, but her gifts have come with a price: she has lost the love of her life. Now surrounded by allies but still utterly alone, she’s seeking to build a new Sanctuary and provide shelter for those who need it, even though none of it will heal her broken heart. 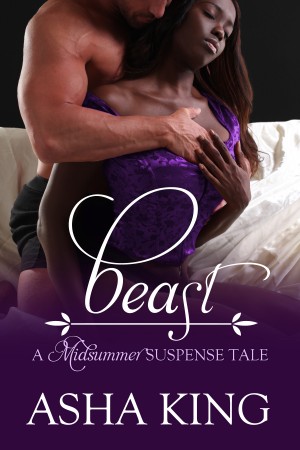 Beast by Asha King
Series: A Midsummer Suspense Tale. Price: $4.99 USD. Words: 61,540. Language: English. Published: December 4, 2015. Categories: Fiction » Romance » Suspense, Fiction » Erotica » Interracial
Though scarred recluse Joseph believes he’s more beast than man, the presence of his mysterious new housekeeper Belle gives him hope for redemption. But beyond the lies surrounding her identity that could destroy their budding relationship, a twenty-year-old secret is buried deep in Midsummer, one from Joseph’s past that might claim both their lives. 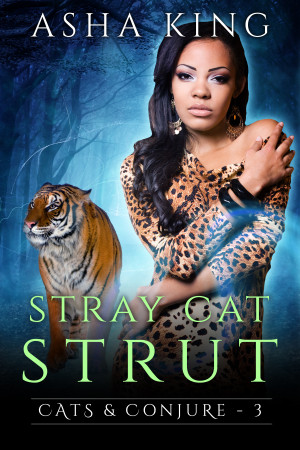 Stray Cat Strut by Asha King
Series: Cats & Conjure. Price: $2.99 USD. Words: 30,950. Language: English. Published: September 18, 2015. Categories: Fiction » Romance » Paranormal » General, Fiction » Erotica » Interracial
Adelaide Deveraux has escaped her enemy’s compound along with her tiger-shifter lover, Erik Wells, but the home that had once been her sanctuary is now gone, burned to the ground and leaving them with no choice but to go on the run. 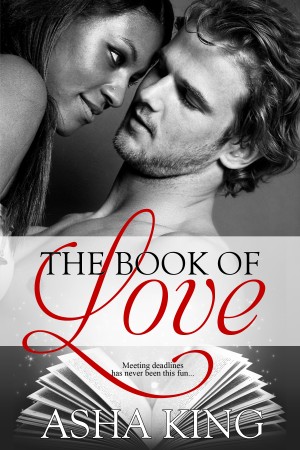 The Book of Love by Asha King
Price: $4.99 USD. Words: 68,620. Language: English. Published: June 5, 2015. Categories: Fiction » Romance » Contemporary, Fiction » Erotica » Interracial
Editor Janaeh Forrester is assigned to the elusive, top-selling romance novelist Delilah Daniels. But “Delilah” is the pen name of Carter Daniels, a thirty-something man as sexy as he is frustrating. Her presence stirs up something far more sinister than a battle over a book, however: Janaeh is directly in the path of Carter’s more fanatical followers who will stop at nothing to get rid of her.
View their profile to see all of their books