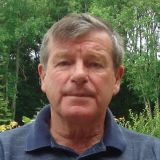 Published 2016-06-02.
How and why did you start writing after you retired?
During my career as a consulting electronics engineer, I wrote a lot of technical papers and a couple of technical books. When I retired in 2007, I decided I needed something to occupy my brain—long-distance walking occupied my body—and so I began thinking about writing books. The first book, “The Religion Business”, had been brewing for some time. My world-wide travels to countries such as India, China, Japan and Israel had exposed me to various religions and I observed the impact certain religions had on the way people lived and the religious practices they accepted, often without question. That book, the first after retirement, was two years in gestation and involved a lot of research but it was like a catharsis, forcing me to solidify my reasons for being an atheist and, also, testing my ability to mix technical with non-technical prose.
What happened then?
I got the bug! I began tightening up my knowledge and use of the English language and I started reading books on how to write. I also began experimenting with e-book formatting—how to position images, how to do away with footnotes and endnotes, how to create text that fits into a reflowable text format, and so on. Creating an e-book that reads well on an e-reader is not a simple task. My short e-book on my life as a boy on an RAF camp in Ceylon, now called Sri-Lanka, was my learning-curve book. That’s why it’s free!
Looking at the list, many of your books are autobiographical.
That’s correct. The story of my professional career, “On One Occasion”, was my next major project and was stimulated by a request to dispose of all the box files containing a copy of every technical paper I’d written and published over a period of nearly forty years, plus plaques, certificates and other awards. I couldn’t just dump them. They contained many memories, some happy, some sad, some amusing, some just entertaining, and I used the contents of the box files to recover and record the memories. I enjoyed writing the book and I still have not dumped the contents of the box files.
Similarly your books on long-distance walking?
Yes, but these two books, “Tales from the Trails Parts 1 and 2”, are not travelogues. They are a compendium of short stories describing the post-retirement adventures my wife and I had while hiking UK long-distance National Trails and similar trails outside of the UK such as treks in the Himalayas, walks along the levadas of Madeira, and hikes in Southern Spain. The style of these two books is similar to that of my professional career book—short stories mostly triggered by, in this case, photographs I took along the way. The two books are designed to be entertaining and will appeal to walkers of all capabilities.
Your next book, “Fingers to the Keyboard”, is different. What happened there?
“Fingers to the Keyboard” is not autobiographical. It’s a collection of short essays on a wide variety of topics. I’m an engineer, well, an ex-engineer, and my training has taught me to question, analyse and occasionally criticise. I am also hard of hearing. I wear hearing aids all day every day. In fact, my encroaching loss of hearing was one of the factors that forced my retirement but that’s another story.

My loss of hearing however has meant that I rely more heavily on the written word than on the spoken word and e-mail is to me what a mobile telephone is to those whose hearing is unimpaired. Consequently, I sound off on some topic by writing a short article expressing my opinion and then firing the article off as an attachment to an e-mail to a circle of relatives and friends. I did this for a few years and then decided to gather the articles into a book. “Fingers to the Keyboard” was the result. In the book, I cover a wide variety of topics—politics, religion, book and film reviews, mathematics, sporting events, English grammar,… You name it, you’ll probably find it in the book. I enjoyed putting that book together and I am now working on a second volume.
You mentioned English grammar. Is this what stimulated “The Wondrous Wacky World of Words”?
Yes. During the course of improving my skills as a writer, I came across many idiosyncrasies of English grammar and I decided to capture these oddities in a humorous but authoritative way. I wrote the book as Molly Wordmaid and my cousin’s wife Jenny (Polly Painter) produced some beautiful cartoon-like illustrations that transformed the book into something much better than just text alone. I’m very proud of this book. It is, to coin a phrase, small but beautifully crafted.
So, tell me about J C Pascoe.
I’ve long had an itch to venture more into pure fiction plus stretch myself by trying to write literary erotica, probably the hardest genre in which to write. “Conversations”, authored by my pseudonym, J C Pascoe, was the result. I would class the book as “general fiction with erotic elements” (this was the suggestion of a publisher) but, to be honest, it’s not pure fiction. There are many facts and figures bandied around by the two protagonists as they converse and their relationship develops from a let’s-meet-again-at-Starbucks level to a let’s-meet-again-at-your-cottage-and-who-knows-what-will-develop? level. The conversations they have propel the relationship forward and eventually… well, you would have to read the book to find out more but be warned—the book contains sexually explicit content.

By the way, you won’t find “Conversations” in the list below. Search for it by entering “Conversations J C Pascoe” in Smashwords’ search engine. If the idea of erotica puts you off, search instead for “Conversations Lite J C Pascoe”. This is an expurgated version of “Conversations”.
Why write under a pseudonym?
I’ve answered that question elsewhere on Smashwords. If you search for “Conversations (Lite) J C Pascoe”, you’ll find separate profile interviews that address many aspects of the “Conversations” and “Conversations Lite” books.
Okay, what’s next?
I am still searching for a true fictional novel in one of the more traditional genres such as crime, mystery, sci-fi, romance, horror, even chick lit but, so far, inspiration has avoided me. In the meantime, I regularly write and post blogs to satisfy my urge to write.
Last question: do you write mostly for money and fame, or mostly for pleasure?
The latter. I write because I enjoy it. I get immense enjoyment selecting and sculpting words into sentences, sentences into paragraphs, paragraphs into articles and stories that entertain. I check and recheck grammar, punctuation, spelling, choice and correctness of word, correctness of facts, loose use of pronouns, progression of ideas, formatting, layout, graphics, ambiguity, and so on. That’s where I derive the pleasure.

At times, I feel as a sculptor or a painter must feel, constantly changing and improving on detail in order to make the whole creation pleasing. Writing is just as creative as sculpting or painting and like any artistic activity skills improve with experience. I looked at my book on religion recently and there are things I will change if I ever republish.

I don’t expect to make lots of money or otherwise become famous through my literary efforts. None of my books are best sellers yet, but if it happens—great. If it doesn’t happen, I’ve still had the pleasure of creating something from scratch and that pleasure is with me forever.
Smashwords Interviews are created by the profiled author or publisher. 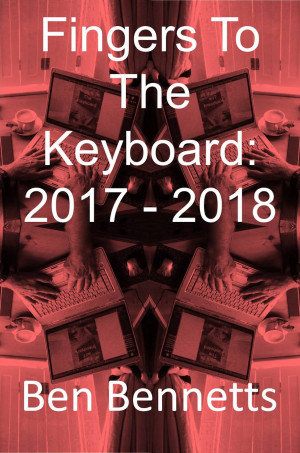 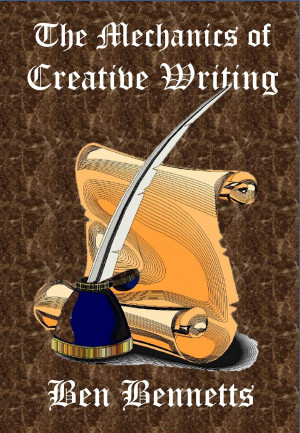 The Mechanics of Creative Writing by Ben Bennetts
Price: $3.99 USD. Words: 20,830. Language: English. Published: April 23, 2018. Categories: Nonfiction » Publishing » Self-publishing
You’ve written your book. It exists as a series of Word files plus, maybe, some clipart, line drawings or photos you want to add. Now comes the hard part: copy editing (grammar, fact-checking, copyright violations, etc.) and proofreading (page layout, image insertion) before conversion into an e-book or, possibly, a printed book to be proud of. How do you do this? This book tells you how. 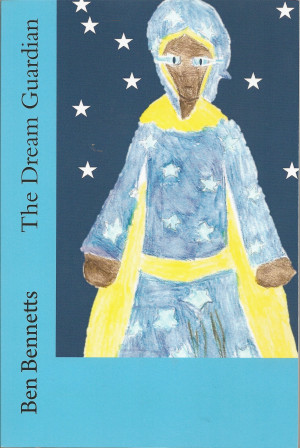 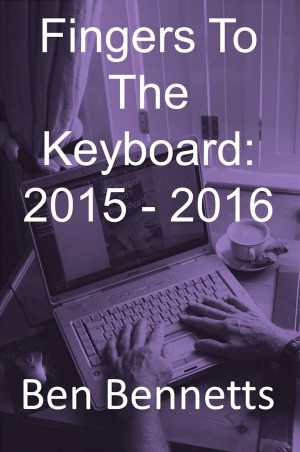 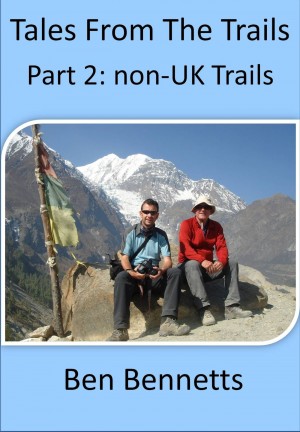 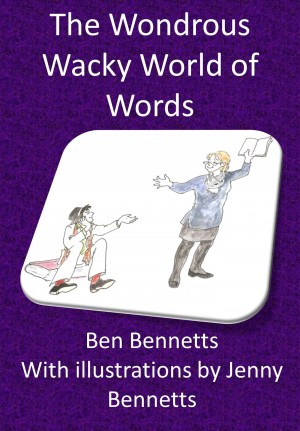 The Wondrous Wacky World of Words by Ben Bennetts
Price: $5.99 USD. Words: 14,440. Language: English. Published: May 30, 2015. Categories: Nonfiction » Reference » Writing skills, Essay » Literature
How are you on words? Can you define the word ‘word’ without using the word ‘word’? Confused over oxymorons, tautologies, alliterations, euphemisms, acronyms and homophones? Bamboozled by onomatopoeias and palindromes? Perplexed by nonce words? Bewildered by spoonerisms and malapropisms? If so, here’s a light-hearted walk through the wondrous wacky world of words that will amuse and amaze you. 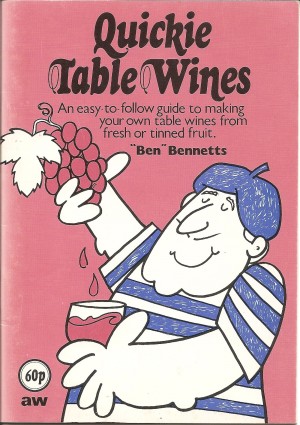 Quickie Table Wines by Ben Bennetts
Price: Free! Words: 4,280. Language: English. Published: May 14, 2015. Categories: Nonfiction » Cooking, Food, Wine, Spirits » Wine
In 1977, I published a booklet “Quickie Table Wines”; a simple “do this, do that” set of instructions producing palatable home-made fruit-based table wines within 4 to 5 weeks. The booklet became a UK best seller, selling just under 12,000 copies before publication ceased around the mid-‘80s. Here it is again. The prices are out of date but the technique is ageless. 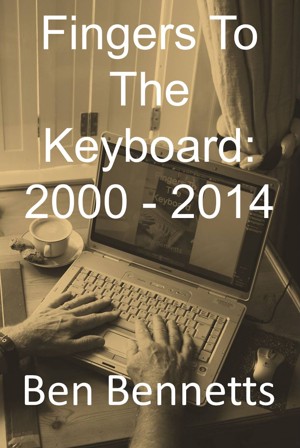 Fingers to the Keyboard: 2000 - 2014 by Ben Bennetts
Price: $3.99 USD. Words: 83,500. Language: English. Published: March 31, 2014. Categories: Nonfiction » Politics & Current Affairs » Current affairs, Essay » Sociology
Fingers to the Keyboard is an eclectic mix and collection of essays on topics such as the stupidity of politicians, the idiosyncrasies of English grammar, the baiting of scammers, the trials and tribulations of being hard of hearing, commentaries on various sports, religious extremism, the beauty of mathematics, film and book reviews, and a miscellany of grumpy old man moans and groans. 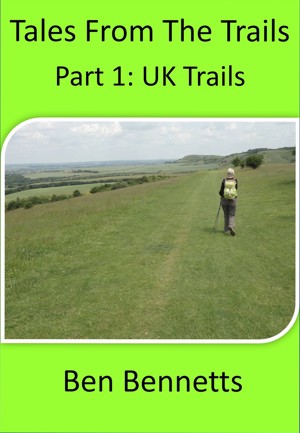 Tales from the Trails, Part 1 UK Trails by Ben Bennetts
Price: $1.99 USD. Words: 18,090. Language: English. Published: February 13, 2014. Categories: Nonfiction » Sports & outdoor recreation » Hiking
Walking is good for you. It provides physical exercise and stimulates the senses. It gets you out and about. You see places that can only be reached on foot. It also has its moments, sometimes funny sometimes dangerous, plus mishaps and other adventures. This book is a collection of observations, stories, advice and photographs from the long-distance walks made by the author. 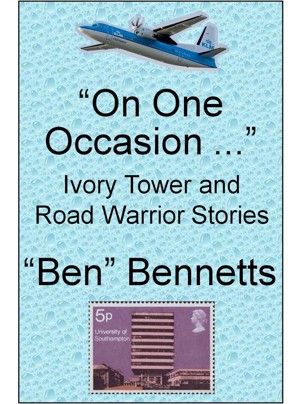 The author, a retired electronics consultant engineer, spent eleven years as a researcher and lecturer at Southampton University (the Ivory Tower) and a further twenty-eight years in industry, mostly as a one-man-band consultant roving the world (the Road Warrior). These are his stories: some funny, some sad, and some just interesting.
View their profile to see all of their books