This interview has been viewed 803 times.

Published 2013-08-23.
How did your childhood influence your writing?
As I noted in Jesus Died for This? growing up as the product of an Episcopal hippie priest/professor and earth mother marked me as different from the get-go. How many nine year old children can recite both the Lord's Prayer and the lyrics to "The Vatican Rag?" Humor became my saving grace that saved me as my alcoholic family imploded leaving me orphaned in my teens. I say tongue in cheek, my choices were satire or cyanide. I chose the more life affirming option.
When did you first start writing?
I wrote my first play, an anti-Nixon rant, when I was nine but didn't actually sell my first piece until the now defunct Wittenburg Door (the nation's oldest, largest and only religious satire magazine) and a Christian drama house bought my first pieces in 1994.
Who were your major influencers?
As a child, gravitated toward comics who searched for the the truth behind the jokes such as George Carlin, Bill Hicks, Lenny Bruce, as well the surrealist stylings of Monty Python's Flying Circus. In my teens, I couldn't read enough Edgar Allen Poe. As an adult, I am drawn to an eclectic range of authors from Jeff Sharlet's hitting exposes of The Family to Lewis Black's Nothing Sacred rants. In the mid '90s, I began studying improv with Gary Austin, founder of the Groudlings and studied voice with his wife Wenndy Mackenzie. They taught me how to switch from trying to "be funny" to seeking the satirical truth lying below the surface. Currently, I am attracted to those endeavors that engage in similar seeking such as the Killing the Buddha and Set List Show.
When you're not writing, how do you spend your time?
I'm a global nomad who likes to be outdoors whenever possible -- kayaking, hiking, fly-fishing.
What is the greatest joy of writing for you?
I love it when my satire hits the right target and watching their sacred cow implode. Also, I continue to be humbled whenever someone tells me how something I wrote touched them profoundly.
What's the story behind your latest book?
I wanted to explore the religious liberty legacy of my 11th and 12th great-grandfather Roger Williams, founder of the state of Rhode Island and a fierce proponent of the separation of church and state. What can we learn from his life and ministry that can help us navigate our contemporary church fights so we can learn to live together in an increasingly pluralistic world.
What do your fans mean to you?
I hate the word fans - prefer to think of those who are in synch with my work as co-conspirators.
What inspires you to get out of bed each day?
It's morning. I'm hungry. I have to pee.
What are your electronic devices of choice?
After my laptop broke during SXSW 2012, I began to explore how I can order my electronic life. Fortunately, this device failed during the best time to explore the latest technological innovations. What I ended up with is an iPad that serves as my laptop, telephone and e-reader with a dual SIM phone available so I can make calls in case the iPad connection is not secure.
What are you working on next?
There's a number of themes I'm exploring via articles, blogs, and the like including the rise of atheist church, separation of church and state, awareness of trans* issues, and the queering of Christian theology. I am starting to research a book consisting of a collection of stories of partners of trans* folks. Also, I am beginning my first work of creative non-fiction depicting my grandfather's experiences coaching sports in the Pacific during WWII - I think of this as Dr. Strangelove Goes to the Pacific On Any Given Sunday.
Smashwords Interviews are created by the profiled author or publisher. 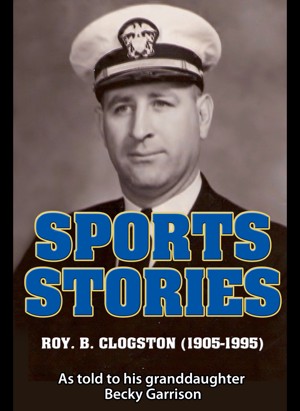 Sports Stories: Roy B. Clogston (1905-1995) by Becky Garrison
Price: $0.99 USD. Words: 10,330. Language: English. Published: February 8, 2013. Categories: Nonfiction » Sports & outdoor recreation » Sports coaching, Nonfiction » Sports & outdoor recreation » History
In this collection of snippets and short stories, Roy B. Clogston recounts his lifelong passion for sports that encompassed such highlights ranging from coaching the US Navy Ford Islands to win the football champion of the Pacific (1943) and Founding the ACC in 1953.