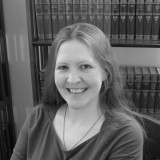 Interview with B. Kristin McMichael

Published 2018-11-19.
What is the greatest joy of writing for you?
For me this is the same as the reason I love to read. I love to go to another world, place, or time. I read 1-2 books a week and almost always some sort of fantasy. Being transported out of the real world and into a book world is one of my favorite past times. I would rather read than watch TV. The best part is when you are the author, you get to decide what happens.
What do your fans mean to you?
Everything!! I started this journey years ago and thought- who would ever want to read my stories. Turns out, lots of people actually. Fans make it worthwhile to spend the hours writing and editing. They make release so much less stressful as they cheer a new book on and they make being an indie possible!
Describe your writing process
My stories all start with one thing- one major moment. From there I develop characters that are at that moment. Well rounded characters make it possible for me to make a rough outline of the story and then I just start writing. If I know my characters well enough, the stories just flow. And occasionally I make a new character that wasn't expected. That's the fun part. I can plan, but there sometimes is just someone that has to be included.
Do you remember the first story you ever wrote?
I honestly don't remember. Years ago I was going through papers from my childhood and it seems I've been writing stories since I've been able to spell words- or rather spell words as good as I could. I don't remember those stories at all. I do remember a few stories I wrote as a teenager. I have no clue where they ended up as technology changes and I have no idea what they were even stored on.
How did you come up with the idea for you most well-known series?
By far I've sold more of the Blue Eyes Trilogy than anything- like more than a 100,000 copies of just the first book. It has been quite a journey. I thought I would write one book and then it turned into a trilogy. At the end I had so many people wondering what happened with one of the characters I decided to write a book for him. That also turned into a trilogy and then it became a whole world. The Night Human world is currently 15 books in 5 series that focus on different characters in different types of paranormal world- vampires, witches, faeries, mermaids, etc. I only meant to write one book and it turned into so much more!
Where did you grow up, and how did this influence your writing?
I grew up in a little tiny town in rural Wisconsin. I think the city has just over 8,000 people when I lived there. I write YA, so it certainly influences my writing but I think college more than anything has had a influence. I went to school in a large city and then moved to just as large city a few states away for grad school. While in grad school, I was able to keep working with undergrad which influence my writing and characters even further.
What drives you to keep on writing?
The stories that keep building up in my head! I think I have the start of at least a few dozen more stories beyond what I'm currently working on. I'm a vivid dreamer and I remember them for years. In fact there was a nightmare I had over 15 years ago that I still can see in my mind if I close my eyes. There is so much more I want to write- I'm more than excited to get it all down and share with the world as there is always room for more stories to read!
When you're not writing, how do you spend your time?
I'm at stay at home mom that home schools her kids. As I have a PhD- I'm a bit picky on how I educate them, so it is a bit of work for me. I spent a decade in my field of biology before staying home after my third was born. I thought it would give me more time to write, but since I've been home schooling, there isn't much time. If I get a few moment, I also like to sew, read, and bake- but Idon't get many free moments.....
What do you read for pleasure?
I read all and any YA fantasy. I like paranormal and urban fantasy, but will also gladly pick up a high fantasy book. Very seldom, I might read a contemporary book. You will not find me reading anything horror. I have enough bad dreams to last me a life time- so nothing scary!
How do you approach cover design?
I've had fun with covers since the first day I started on the publishing journey. While some people look for cover designers, I've looked for artists. I've spent way too many hours pouring over deviant art pages to find people I love the art work of. I want an artist first and foremost and have been very lucky. When I found someone that specialized in mermaid art and then I wrote a mermaid novel, I was beyond blown away by her art. I always go for something that would catch my eye as I'm always a reader along with being a writer.
What is your writing Kryptonite?
Marketing. If I have marketing to do, it distracts me from writing. I'd love to just sit and write all the time but part of being an author is to get out there and tell people about your books. That is a hard part for me.
Smashwords Interviews are created by the profiled author or publisher. 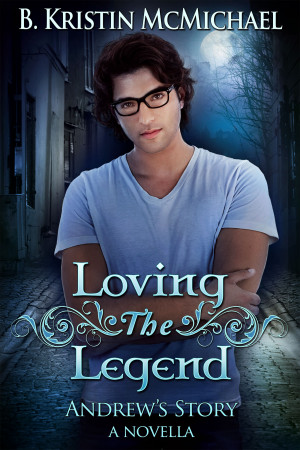 Loving the Legend by B. Kristin McMichael
Price: $2.99 USD. Words: 35,260. Language: English. Published: September 29, 2019. Categories: Fiction » Young adult or teen » Science Fiction, Fiction » Fantasy » Urban
In a world of blood-drinking monsters, Andrew is related to one of the worst of the lot and would do anything to leave, but something makes him stay behind. 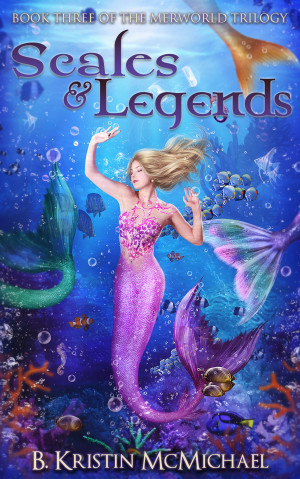 Scales and Legends by B. Kristin McMichael
Price: $3.99 USD. Words: 61,240. Language: English. Published: June 13, 2019. Categories: Fiction » Young adult or teen » Fantasy, Fiction » Fantasy » Urban
Secrets don't help Whitney when there is war going on. The clans of the merworld all want to be on top, but only one can rule. Will Whitney survive the war of the merclans? 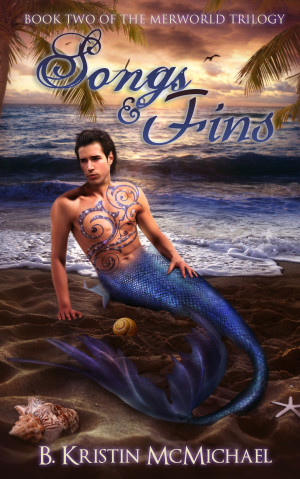 Songs and Fins by B. Kristin McMichael
Price: $3.99 USD. Words: 63,870. Language: English. Published: June 13, 2019. Categories: Fiction » Fantasy » Paranormal, Fiction » Young adult or teen » Fantasy
Whitney must learn how to adjust to her new life, but the strangers in town could cause trouble for her since they hunt night humans like the siren Whitney just joined. 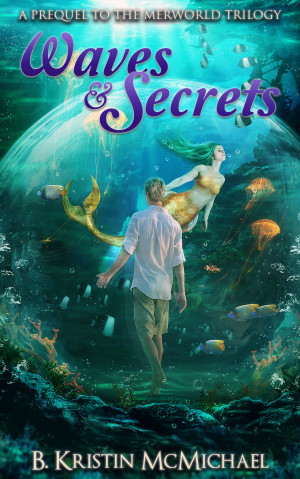 Waves and Secrets by B. Kristin McMichael
Series: The Merworld Trilogy. Price: $2.99 USD. Words: 45,360. Language: English. Published: June 11, 2019. Categories: Fiction » Young adult or teen » Fantasy, Fiction » Fantasy » Paranormal
Sam desperately wants out of the Merworld, but he had one last chore before he can leave..... if he still wants to. 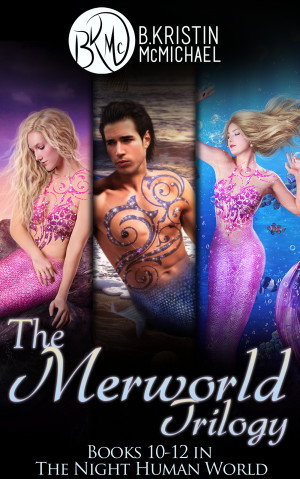 The Merworld Trilogy Complete Collection: Water and Blood, Songs and Fins, Scales and Legends by B. Kristin McMichael
Series: The Night Human World. Price: $9.98 USD. Words: 175,290. Language: English. Published: January 14, 2019. Categories: Fiction » Young adult or teen » Paranormal, Fiction » Fantasy » Urban
All three books in the Merworld Trilogy following Whitney as she looksfor a fresh start, and that was what she thought she had got, until she finds out about the not-so-human people that call her small town home when they aren’t in the water. 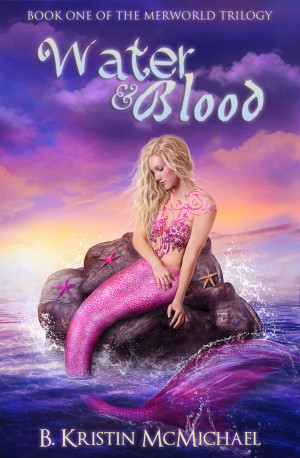 Water and Blood by B. Kristin McMichael
Series: The Merworld Trilogy. Price: $2.99 USD. Words: 69,100. Language: English. Published: August 26, 2018. Categories: Fiction » Fantasy » Paranormal, Fiction » Young adult or teen » Fantasy
Whitney flew halfway across the country to start over, away from the paranormal night human world she grew up in. Until she decided to take swim lessons. She was paired with high school hottie "Prince Sam", as his friends called him, and she’s quickly thrown right back into the night human world. Can she survive going back? 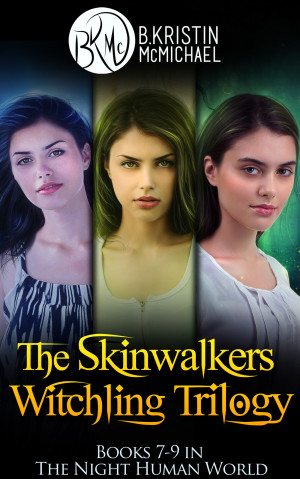 The Skinwalkers Witchling Trilogy Complete Collection: The Witchling Apprentice, The Wendigo Witchling, The Witchling Seer by B. Kristin McMichael
Series: The Night Human World, Book 3. Price: $8.98 USD. Words: 204,740. Language: English. Published: February 6, 2018. Categories: Fiction » Young adult or teen » Paranormal, Fiction » Fantasy » Paranormal
Cassie's about to go to witch school, but when people start turning into animal-shaped monsters at night, she realizes that not all of her lessons are found in her books. This complete collection contains three books: The Witchling Apprentice, The Wendigo Witchling, and The Witchling Seer. 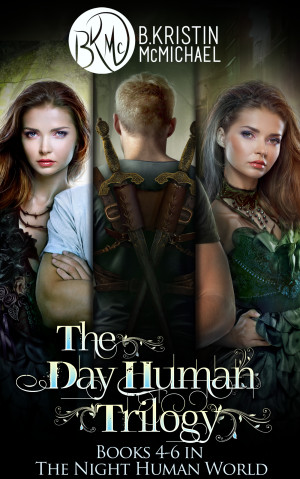 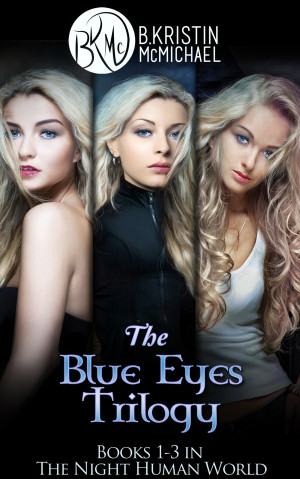 The Blue Eyes Trilogy - The Legend of the Blue Eyes, Becoming a Legend, Winning the Legend by B. Kristin McMichael
Series: The Night Human World, Book 1. Price: $5.99 USD. Words: 235,790. Language: English. Published: July 7, 2017. Categories: Fiction » Fantasy » Paranormal, Fiction » Young adult or teen » Fantasy
All three books in the bestselling Blue Eyes Trilogy are available together in one collection. Follow the story of Arianna Grace, a girl struggling to grow and find her place in a world of vampires, werewolves, and other creatures of the night. 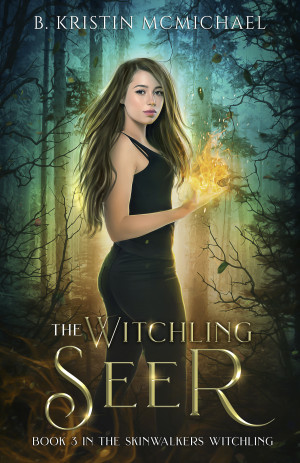 The Witchling Seer by B. Kristin McMichael
Series: The Skinwalkers Witchling Trilogy, Book 3. Price: $3.99 USD. Words: 73,450. Language: English. Published: August 30, 2016. Categories: Fiction » Fantasy » Paranormal, Fiction » Young adult or teen » Paranormal
Book Three in the Skinwalkers Witchling Trilogy Cassie needs to learn how to be the seer she should be, but that is a problem since the coven is still bent on taking her powers from her. Attacked from all fronts, Cassie has to step up and take control, for the fate of her friends, family, and clan.
View their profile to see all of their books