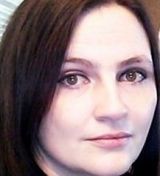 This interview has been viewed 1,159 times.

Published 2013-12-19.
Who are your favorite authors?
Lauren Dane, Sarah M Cradit. Magen McMinimy, Gena Showalter, F Paul Wilson, and I could keep going and going.
What inspires you to get out of bed each day?
My kids waking up, that usually does it. I can't sleep when they aren't. Other than that, I love to tell my stories, I do a lot of writing throughout the day.
When you're not writing, how do you spend your time?
Family stuff, hanging out with friends, and reading books.
How do you discover the ebooks you read?
Since I've been writing, I've met a lot of authors. I'm generally willing to give anything a chance, and I find a lot of authors that way. Otherwise, freebooks for kindle. Lauren Dane was one of those. I downloaded a free book and now I've read most of her books.
Do you remember the first story you ever wrote?
Haha, yeah. I won a young author award in first grade about my dog Scooter.
What is your writing process?
Um... I usually have some coffee next to me, dressed in my pj's or sweats, Hershey kisses in reach while I type away. I don't outline, I find that I never stick to them... like at all. I just write, and let the story take me where it wants to go.
Do you remember the first story you ever read, and the impact it had on you?
Um, no. I read so many books when little I don't remember the first. Sorry.
How do you approach cover design?
Someone told me I'd never learn Photoshop well enough to do a cover, so I decided to give it a shot anyway. I like how it turned out, but I've only gotten better. I try to find something that fits the book. I mean, it doesn't have to match perfectly, it never does, as long as I can get the general idea, I'm happy.
What are your five favorite books, and why?
These are in no particular order.

Obsidian Butterfly by Laurel K Hamilton. I like the direction she took, and how she brought the characters to life.
Darkest Seduction by Gena Showalter. I love Paris and how conflicted he is. Sienna is a strong character that I love.
Lover at Last, Blay and Qhuinn's story was told wonderfully. Before it came out I would have said V's story ;)
Dark at the End by F Paul Wilson, or really any book by him. I just love the way he weaves his stories to branch into eachother.
Chaos Burning by Lauren Dane. I love all of her stories, but I always love a strong woman with a strong man who can step back and let his woman do her thing.
What do you read for pleasure?
Mostly Paranormal anything. I do read a little ever everything though.
What is your e-reading device of choice?
Kindle. I love my Kindle fire, but I think I need a paperwhite for when I take kiddos to the park.
What book marketing techniques have been most effective for you?
I have mostly just used Facebook and Twitter without paying for either.
Describe your desk
a lapdesk. It's black, beat up, and goes everywhere with me.
Where did you grow up, and how did this influence your writing?
Washington State, not sure it influenced my writing though. Although I tend to write most of my stories in Washington.
When did you first start writing?
I've always written. I didn't get serious until after I had my third child. Then It became a way to stay sane.
What's the story behind your latest book?
Falling Into Place has been percolating in my head for years. It started back in 2008.
I had this idea of these two mages who had always been in love. Robert's brother tore everything from Elizandra (Liz) and when Robert finds her bloody and injured the next morning, she freaks, thinking its the brother (who was wearing an illusion to look like Robert) and she nearly killed him. She barely saved him. She left, afraid of herself more than anything.
The story was supposed to start where Robert came back, and it was supposed to be the two of them.
Except, then Tremaine stepped in, and the big flashing block fell down and the story progressed from there.
Years later, after the brother comes back, Robert comes back to help keep her safe. But she's gone and fallen for the man who saved her from a horrible childhood. Somewhere along the way Tremaine fell for her too. With danger around the corner they all find their place together.
What motivated you to become an indie author?
A publisher told me to change everything about Fallon, and I couldn't do it. I had just read a book by HP Mallory and her journey, and decided that I had a better shot going that route. Turned out I was right.
How has Smashwords contributed to your success?
It's a good platform to put my books out. I like the community.
What is the greatest joy of writing for you?
Telling the stories floating around my head.
What do your fans mean to you?
My fans are awesome. I never imagined I would have any. I mean, I was never picked up by a publisher, so I didn't really expect anyone to enjoy my books. They do. I love hearing from the readers. They are a great motivator.
What are you working on next?
Right now, a short for an anthology. Then I'll be doing the first spin off book, and then back to Edenton.
Smashwords Interviews are created by the profiled author or publisher. 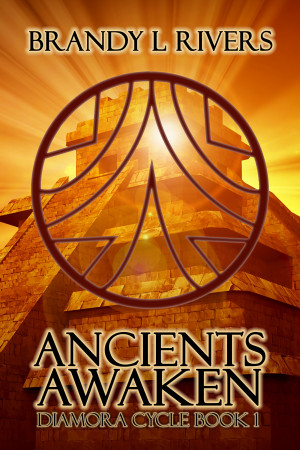 Ancients Awaken by Brandy L Rivers
Series: Diamora Cycle. Price: $3.99 USD. Words: 51,140. Language: English. Published: March 25, 2020. Categories: Fiction » Thriller & suspense » Action & suspense, Fiction » Thriller & suspense » General
A scientist awakened an ancient archaeological site, setting off a chain of events that could mean the end of everything we know. A couple archaeologists and a former park ranger will work together to find answers, and stop the cycle once and for all. 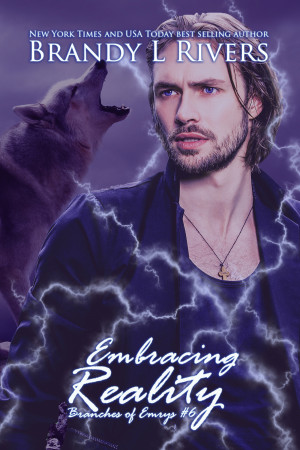 Embracing Reality by Brandy L Rivers
Series: Branches of Emrys. Price: $3.99 USD. Words: 47,960. Language: English. Published: November 2, 2019. Categories: Fiction » Romance » Paranormal, Fiction » Fantasy » Paranormal
A month of exploring Australia, and Skylar McNamara doesn’t realize her mate Jay Walker has brought her back to his hometown. Morrisey is long gone but Skylar wanted to know where he’s from. A lightning strike grants Jay new magic and unleashes an ancient evil. Skylar urges him to follow his instinct up the north coast. What they find changes everything Jay knew about his family and fate. 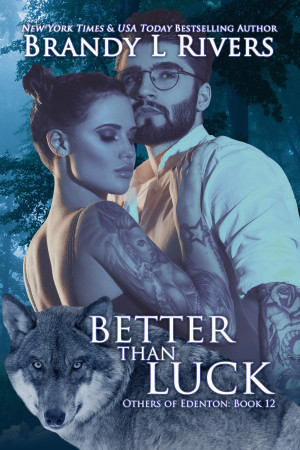 Better Than Luck by Brandy L Rivers
Series: Others of Edenton. Price: $3.99 USD. Words: 50,660. Language: English. Published: June 29, 2019. Categories: Fiction » Romance » Paranormal, Fiction » Fantasy » Urban
Danika never trusted luck. Love, that was different. She fell for Adam at first sight. Eighteen years later, they have a small family, but she learns her childhood cancer is back. Can Adam convince her being Other is their only option? Or will her father steal her luck as only a leprechaun can. 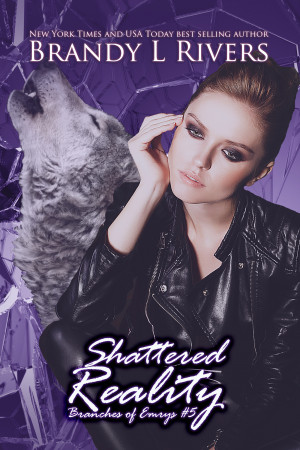 Shattered Reality by Brandy L Rivers
Series: Branches of Emrys. Price: $3.99 USD. Words: 70,940. Language: English. Published: May 4, 2019. Categories: Fiction » Romance » Paranormal, Fiction » Fantasy » Urban
Reality is so fragile. Skylar walked out on Tyler after months of spewing crazy talk about everyone she knows. Turns out he was half right. Jay couldn't ignore two werewolves shifting in broad daylight to attack two humans in a coffee shop. He shifted and saved her, but couldn't save the man. One look and he knew she was his mate. 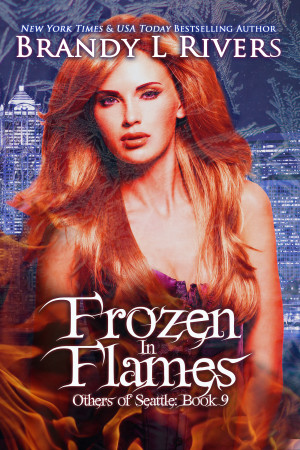 Frozen in Flames by Brandy L Rivers
Series: Others of Seattle. Price: $3.99 USD. Words: 48,610. Language: English. Published: January 7, 2019. Categories: Fiction » Romance » Paranormal, Fiction » Fantasy » Urban
Lonny was ready to leave to give Lana a chance at happiness. He only stayed to ensure her safety. Lana can't keep hiding her feelings. She's ready to fight for Lonny, but someone wants to use her. Together, they'll face challenges that threaten to tear them apart. 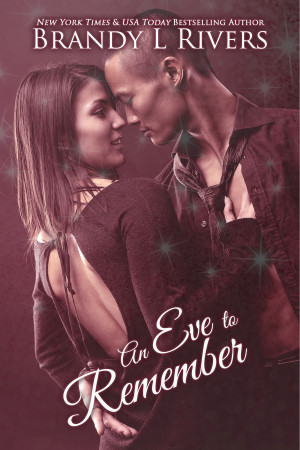 An Eve to Remember by Brandy L Rivers
Price: $0.99 USD. Words: 5,790. Language: English. Published: December 15, 2018. Categories: Fiction » Romance » Contemporary
After a long shift, Eve lets her partner take her out for a drink on her Christmas Eve. Moments after his departure, a stranger takes his seat. The night seems to be looking up. But what happens when the morning comes. 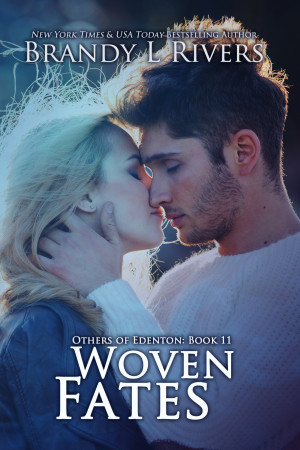 Woven Fates by Brandy L Rivers
Series: Others of Edenton. Price: $3.99 USD. Words: 81,140. Language: English. Published: October 30, 2018. Categories: Fiction » Romance » Paranormal, Fiction » Fantasy » Urban
Mark was a witch but became a werewolf to escape certain death. He left that life behind. Gina has no memory of the last 16 years and the hell she endured. Mark is her other half. Together they will face his past and the threat that has found him again. 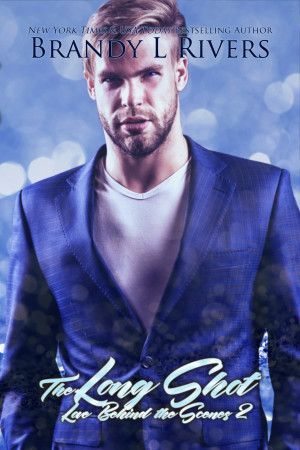 The Long Shot by Brandy L Rivers
Series: Love Behind the Scenes. Price: $3.99 USD. Words: 84,590. Language: English. Published: July 27, 2018. Categories: Fiction » Gay & lesbian fiction » Gay, Fiction » Romance » Contemporary
One Look and he knew it was a long shot. Ryan King is a movie star with a secret. Women fall at his feet for a chance, but he's never been interested. He's always wanted what he couldn't have. Shannon O'Neil's life has changed drastically. A Navy SEAL whose injury forced him to reevaluate his choices. Now he runs a security firm. The attraction is immediate, but can they survive the outside world? 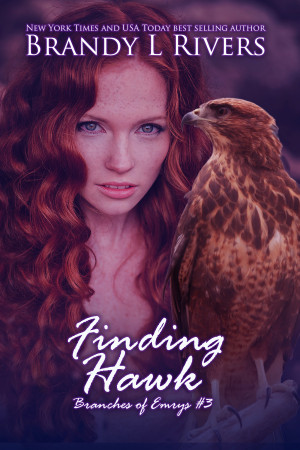 Finding Hawk by Brandy L Rivers
Series: Branches of Emrys, Book 3. Price: $3.99 USD. Words: 73,330. Language: English. Published: March 9, 2018. Categories: Fiction » Romance » Paranormal, Fiction » Fantasy » Urban
Armed with her father's journal, Jacinda head to Wanatoga to uncover his secrets. On the way, she lands herself in trouble. Chatan's been trying to stop the murders in the next town when a stunning redhead becomes the next victim. Before he can step in, she escapes. Luckily, she doesn't go far, heading to the nearest motel, which is aunt owns. Together, they'll find what she's looking for. 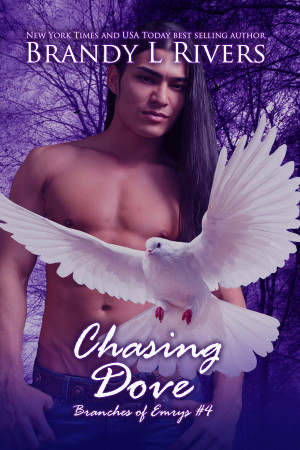 Chasing Dove by Brandy L Rivers
Series: Branches of Emrys, Book 4. Price: $3.99 USD. Words: 60,910. Language: English. Published: May 11, 2018. Categories: Fiction » Romance » Paranormal, Fiction » Fantasy » Urban
Nightmares plague Jacinda after finding what she'd been looking for. In order to protect Chatan, she leaves. Unable to let her go, Chatan follows, determined to prove she needs help, and not just his. Together, with allies she never realized she had, they'll uncover the secrets of the relics she found, and finally battle an ancient evil.
View their profile to see all of their books