This interview has been viewed 556 times.

Published 2014-03-15.
Describe your desk
My desk is about 6 feet long, papers to the right of me, papers to the left. We just moved but I confess it never is very tidy. The papers are mostly research notes, to-do lists and magazines with inspirational pictures. I don't use a laptop so there's a big black CPU to my left with a printer clinging for dear life to the far corner of the desk. It's not tidy, as I say, but I get the job done here.
When did you first start writing?
I used to lie awake in the dark, a life-long night owl, and tell myself stories to pass the time until I'd fall asleep a couple of hours after I was packed off to bed. My father loved to take long car trips and those stories helped with the boredom of a long drive...no tv sets in the cars back then! Eventually I started writing the stories down. I started writing for publication in my 20's, selling my first book at 28. I gave myself until I was 30 to get published...or I'd have to get a 'real job'.
What's the story behind your latest book?
I'm writing a series about a Hero for Hire in the Ancient World -- Greece, Egypt, Thrace, etc. The first two are HERO FOR HIRE and THE STONE GODS. In the third one, DARK MOUNTAIN, Eno the Thracian is investigating his mysterious past when he gets drawn into the fate of a lost people, kidnapped from their homeland to toil endlessly excavating a mountain from the inside. I wanted to explain more about my happy-go-lucky hero's life and to deepen the character from a merry warrior to a more emotionally open level. He often makes light of dark situations and I wanted to put him in a place where that mechanism would not serve him as well as it has in the first two books. At the same time, however, I wanted to keep the humor because these books are funny! That was a challenge that I enjoyed exploring.
Who are your favorite authors?
I read across a wide spectrum. I'm very fond of the detective stories from the so-called Golden Age of the 1930's...but I also read a lot of science-fiction. I love reading history, but also fantasy, the history of places that never were. Some authors are Agatha Christie (her style is so simple yet she'll fool you every time), Rex Stout, John Dickson Carr/Carter Dickson, and the Judge Dee books. You can't go wrong in s/f with Elizabeth Moon, John Scalzi, or Lois McMasters Bujold, who has also written some amazing fantasy. Of course, I read Terry Pratchett and A. Lee Martinez as they write the way I'd like to.
What advice would you give to aspiring writers?
Keep going. You're going to start and stop a lot of books. Nobody says you have to write each one all the way through to 'the end'. Learn what you need to from each book you start and if you don't want to finish it, don't. Sooner or later you will come up with an idea that you can't wait to finish. I also suggest that a writer work on one book at a time. Many times people will say, 'oh, if I run out of ideas on one book, I just write for a while in one of the others'. But that is guaranteed to keep you from finishing anything. Usually they haven't 'run out of ideas', they've merely reached a difficult section of the work. You just have to push on through the 'hard parts' because it is those moments -- the ones that you don't want to deal with, that make you uncomfortable, that make you wonder 'why did I become a writer?' -- that make for a strong book. The death of a character, the 'dark moment', the emotional epiphanies are hard to write -- they draw words out of your soul -- are the moments that readers will respond to the most, those are the moments that make them say to the nearest person "you gotta read this book!"
What is your writing process?
Mostly I dither around, doing everything except writing until I just can't stand it any more. Then I start. I gather a lot of research, reading what I need for my next project, and let that stew in my sub- or un- conscious mind for a while so that it is there when I need it to be. As I write mostly historical or fantasy/historical fiction, research is vital. So often I pick up a piece of information almost at random that will make the whole book work out.

Then I need a good first line, which won't necessarily make it into the finished piece. It's just the key that will open the door. For instance, you'll almost never see one of my books open with a description of the weather, yet I might write that description just to get the words going. Every day when I start, I re-read what I wrote the day before, edit it, and carry on. Then I do a grand edit at the end, when, with luck, all the bits fit together. Then I dither around until the whole thing starts over again.
Do you remember the first story you ever read, and the impact it had on you?
My parents told me that I started reading when I was three. My first book must have been Pokey Little Puppy or some other Little Golden Book title or something like that. I remember loving the Harold and the Purple Crayon books. I'm sure that it had a real impact because going around creating something out of nothing with the help of a crayon, pencil or keyboard is, essentially, what all writers do.
Do you write on a typewriter, computer, dictate or longhand?
One of the best days of my life is when I traded in an old IBM Selectric for my first computer. It had a screen about the size of a cell phone, 5.25 inch floppies that really *were* floppy, nothing but green text, and a drop-down keyboard. A miracle! I never looked back. However, a few years ago, I started finding that I enjoyed writing in longhand, especially in difficult parts of a book. Something about physically *writing* instead of typing made a difference not only in the ease of writing but also, possibly, in the quality. I'm quite picky about the kind of notebooks I write in and impossibly picky about my pens! I used to write on the best quality paper-bound notebooks (with the rings at the top, please) until they got to be prohibitively expensive. Now I use Office Max's college-ruled notebooks with the plastic covers. The paper is smooth without any of those little slubs that make the pen jump around. Writing on the cheaper ones is like trying to write on a knitted blanket. As for pens, they mustn't be too scratchy or spidery. I am not above purloining a pen if it feels right to me...so beware! Oh, never mind...that's blue ink. I only use black.
Where did you grow up, and how did this influence your writing?
I moved around a great deal when I was...well, my whole life, actually. The longest I've ever lived anywhere was nine years and that was after I was grown with a child of my own. I just moved in here about three weeks ago. I'm hoping it will be for the last time until they carry me out feet first, but I hoped that about my last house too!

Changing that much, going to new schools all the time, always being 'the new kid', was hugely influential. I was reliant on my own inner world to create consistency in my life and found within my writing the power to control circumstances that was denied me as a child always on the move. At least twice, the school boundaries were redrawn so I found myself going to a new school even *without* moving! But books and my stories always came with me wherever I found myself, offering stable points in a shifting landscape. I still have books from those days, whatever else I may have lost or left behind. Hobbiton, for instance, is *always* Hobbiton even if New York is being traded for Tucson.
What are you working on next?
There are two more Eno the Thracian books in the works. I'm going to be participating in a 'How-to' book with some fellow indie writers that should be out this fall. I have a short story in an anthology centering around Steampunk vs. Aliens coming sometime in early summer (2014) which will be followed by a steampunk novel...to be named later. Boy, until I saw it all laid out like that I thought I wasn't doing much... Better get a move on!
Smashwords Interviews are created by the profiled author or publisher. 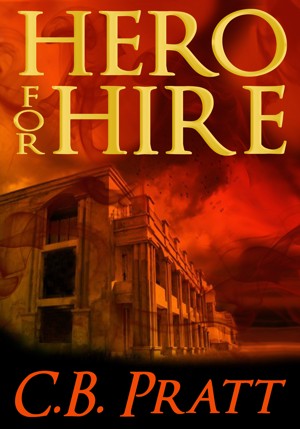 With all the famous heroes fighting the Trojan War, there's freelance work enough in an Ancient Greece where the monsters are as real as the Gods. Armed with his wits and a mysterious sword, Eno must stop the Witch-Goddess Hekate from opening the seventeen doors of Hades to release her zombie army...and find his own way out before becoming her immortal general or, even worse, her lover.