This interview has been viewed 237 times.

Published 2017-11-21.
Where did you grow up, and how did this influence your writing?
I grew up in a little suburb east of Melbourne, Australia. It was green, it was hilly, and a great place to explore as a kid. My parents provided a very stable environment, and my other five siblings meant life was rarely dull. However...it was a working class family, and I discovered as I got older that my aspirations were more middle class, and this created a divide that I've lived with since. I suppose my idyllic childhood made me sentimental and nostalgic, and that seems to have fed into the subject of my latest novel, which is a time travel yarn. My 'outsider' status within the family means I favour stories about outsiders, and the novel is full of them.
When did you first start writing?
I've always written stories, since I was a child. The first 'serious' writing I did was in the late eighties when I started writing film scripts. From there I went to writing a young adult novel, then some internet blogging, then songwriting, then finally, this latest science fiction novel.
What's the story behind your latest book?
I was reading a biography of the French poet, Arthur Rimbaud, and the author made a whimsical suggestion about going back in time to visit the poet, and that got me thinking about a time travel program that benefited scholars and other academics, rather than the military and rich people, etc. Also, I always liked the TV show Stargate, but was annoyed that they didn't further pursue the time travel possibilities inherent in the concept, so I thought I'd try using a similar concept I called 'Timegate'. When I think of time travel, my first thought is always to visit the time of Jesus Christ and check out how that played out for real, so that's an important part of the novel. The rest is throwing balls and characters up in the air and trying to make them stick!
What motivated you to become an indie author?
The awesome availability of online resources for indie authors. I never really set out to be an 'indie' author - It would still be nice to be a mainstream author (more money and prestige!) - but maybe I'm just too impatient (or not talented enough?) for that.
What is the greatest joy of writing for you?
Getting lost in the moment as you write, being totally immersed in your characters and story.
What are you working on next?
The next project is actually a spinoff from this novel. I had a lot of material left over that I wanted to develop into another story, and so that's what I'm doing. There was a storyline in the original draft that made it too unwieldy, so I omitted it. But I like the story and characters, so I want to give them a chance to shine on their own. Also, it makes good business sense to give the readers more of the same (assuming they like the first book!).
Who are your favorite authors?
Oh Ursula Le Guin times a thousand! Her writing is so sympatico with me, I've adored everything she's ever done. There isn't room here to gush enough about her, so I'll just keep it at that. Some other faves are Philip K Dick, Michael Moorcock, Isaac Asimov and Tolkien. Outside of scifi and fantasy, I love Dickens, Austen, Twain and other classics authors. I'm getting into steampunk at the moment, and I'm about to tackle China Mieville's Perdido Street Station. Be fearful for me! I don't read much modern mainstream stuff.
When you're not writing, how do you spend your time?
I'm a complete pop culture crunchy nut, so music, film, TV, internet, etc, then rinse and repeat. I'd travel more if I had the money. I'm also part of a political group that advocates for co-operatives.
How do you approach cover design?
Not sure if there's a specific 'approach'. My cover designer, Alexander, happened to have a portrait in his folio that caught my eye, and so I had him develop it for the cover of my new novel, Eye of the Timegate. The image of the girl fit a number of scenes from the book, and I had Alex add the ankh necklace and alter her features to better fit the character she's based on. I must say, the final product has polarised people - especially along gender lines. Guys seem to like it, but girls don't (so far!). Which is a pity, coz I put a lot of effort into making it 'female-friendly'. If readers stick it out and get near the end they will discover the scene the cover's based on and, hopefully, be pleasantly surprised. There's definitely a surprise there based on who the woman is actually looking at. I'm not telling!
What are your five favorite books, and why?
Oh I love this question! The Dispossessed, by Ursula Le Guin. It's a beautifully constructed vision of an anarchist 'utopia' (some might call it a dystopia - Ursula called it an 'ambiguous utopia'), and a fascinating story of a physicist's trials coming up with a special unified theory of everything. One Hundred Years of Solitude, by Gabriel Garcia Marquez, because it was my introduction to magical realism, and an astounding piece of writing. Persuasion, by Jane Austen, because it's my fave Austen, and I love the theme of second chances contained within it. The Adventures of Huckleberry Finn, by Mark Twain, because it's simply the Great American Novel. An Alien Heat, by Michael Moorcock, because it's a delicate flower of a ripe, rotting future society that always blows my mind.
What is your e-reading device of choice?
Kobo Glo. I love my 'glo'!
Smashwords Interviews are created by the profiled author or publisher. 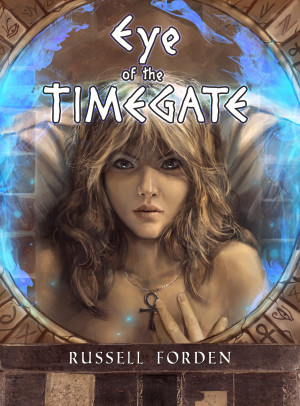 Eye of the Timegate by Russell Forden
Series: Timegate. Price: $3.99 USD. Words: 136,910. Language: English. Published: November 21, 2017. Categories: Fiction » Science fiction » General
Kathy Rodriguez is a geologist who has just lost her lover, John Hannebury, in an accident while investigating an unusual object discovered underground. Lina Thigpen is an experimental physicist who helps to investigate the strange anomaly discovered by Rodriguez and Hannebury. Their stories culminate in a rescue mission that unlocks secrets that could change the world.