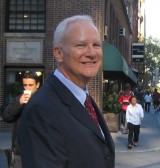 Published 2015-03-05.
Where did you grow up, and how did this influence your writing?
I grew up in Richmond, Virginia in the suburbs in the late 1950s and '60s when kids actually played together on their streets and houses never needed to be locked. Organized sports were rare. Most families only had one car. The transportation of choice for kids was the bicycle. I led a neighborhood gang of mostly girls in bicycle adventures all over Richmond. Our parents did not have complete knowledge of just how far we roamed. The key was to be back in time for lunch or supper. Chapter 3 in my novel, The Z Redemption, basically is a slight exaggeration of my childhood.
When did you first start writing?
I read a lot of science material as a kid, mostly astronomy and physics, and these fueled my imagination and gave me fire to explore. So I wrote a number of short stories until I got busy in college. I went to the College of William and Mary, a liberal arts school, and majored in history. Most of our exams required us to write three essays in less than an hour. I ended up with a career in accounting and hospital administration and did a lot of business and marketing-related writing. I retired (too young) at age 54. Five years ago I went to live in Mexico for a year and had experiences there which resulted in my renewed passion for writing. The most excruciating experience was the murder of a young friend whose company I enjoyed daily. He was an innocent who got tortured and murdered by a drug cartel. Writing truly has been a form of therapy for me.
What is the greatest joy of writing for you?
I feel very connected with whatever is going on in my subconscious life when I am in the middle of writing a novel. I feel the characters inside me. I wonder why they act and feel the way they do, so I ask them. They tell me, and I write about it.
What do your fans mean to you?
All six of them? Haha, I really just want people to read the book and my future books and to feel like they were entertained. I put a lot of research behind the writing, because I want the reader to learn something interesting which they did not know before.
What's the story behind your latest book?
God, Corvette Nightfire was fun to write! It was great to do it with Robert Selfe always challenging me and some of the story content. He also wrote the poker hands in the climactic scenes where Corvette is playing at the Final Table in the World Series of Poker. This novel is a love story, a story of self-discovery, a story of the making of heroes, and a story of Good versus Evil.

Here is the synopsis as it appears on the back cover of the print edition of the novel:

Can Just One Dance Change Destiny? As Corvette Nightfire approaches the casino in Las Vegas, the doors burst open to the sound of gunfire. A beautiful woman rushes to him and thrusts a heavy bag into his arms. Instructing him in Spanish, which he doesn't understand, she runs past him to a waiting car. A professional poker player in town to play in the Final Nine in the World Series of Poker, Corvette soon discovers that he is inexorably connected to Valentina, this exotic woman who has just put his life into a tailspin.
He disappears into an international vortex of intrigues, a complex world or ordinary heroes and heinous cartel thugs, in a desperate race to find and save her. They cannot speak each other's languages, but on the romantic evening on which they meet, Valentina tells her story through dance images. She becomes an animal spirit, an amber-eyed black jaguar that Corvette must ride to find the woman he inexplicably loves. His heart reveals that the millions of dollars in prize money in the tournament mean nothing compared to Valentina's life. Not understanding what is guiding him through the vortex, Corvette comes to an unexpected destiny, one of reconciliation to generations of family sins.
A suspense-thriller, Corvette Nightfire takes up where The Z Redemption leaves off and straps the reader into another bumpy, exhilarating ride!
What are you working on next?
I want the third novel in The Z Redemption Trilogy to have even greater energy than the first two. Every day that passes, people are dying by the hundreds or thousands in the conflicts with the drug cartels, mafias, and organized crime groups all over the world. In Corvette Nightfire, the violence that Mexico has felt for the last decade spills over into the United States as the drug cartels strengthen their lines of business in this country. The principle characteristics of the work of the cartels are complete disregard for life and the elevation of cruelty. Their weapons of intimidation are terror, corruption and death. Their goals include building a "narco-continent" where governmental units at all levels facilitate their industries. The ones to stop them are ordinary people who become heroes, and in particular, heroes who lead.

So next comes Volume 3 of The Z Redemption Trilogy. Robert Selfe, who has edited the novels and who contributed story and character ideas to the second one, is collaborating with me to write the final volume. Corvette Nightfire hints at what is to come in the third of the series. Robert and I want to focus on the illicit use of the internet by the cartels as they become more proficient in expanding their global reach and become more sophisticated in the use of high technology.
Who are your favorite authors?
Nowadays I read mostly books written in Spanish. My favorite authors currently are Isabel Allende, Arturo Perez-Reverte, Esmeralda Santiago, Paulo Coelho, and Francisco Martin Moreno.
What inspires you to get out of bed each day?
Since I started writing again, I really enjoy life. Mine is very busy, so I like to get up and get going. To be truthful, I do not sleep all that well. I go to bed late and am usually up by 7 am. I do need social contact in my day and try to see my grandchildren several times a week. I am lucky. My two married daughters, my five grand-kids, and my dad all live within five miles of me.
When you're not writing, how do you spend your time?
Doing very ordinary things! For exercise, I like walking and riding bicycles (still!) and a little bit of weight lifting or resistance work. I go to book stores and movies. The house and yard always need some attention. I practice Spanish everyday. I do research for my writing, and I use social media to try to build a network that will eventually help book sales. It is all fun!
How do you discover the ebooks you read?
I rarely read a printed book. I purchase e-books using search on my Nook or Kindle or on my laptop computer. I love the convenience of being able to use the electronic devices to access my library and to read samples of books, read reviews, and purchase the ones I want.
Do you remember the first story you ever wrote?
I remember the first story that had some sophistication to it. It was historical fiction involving Lord Dunmore, the English Royal Governor of Virginia, and it took place in Williamsburg during the months before the outbreak of the Revolutionary War.
What is your writing process?
I start with deciding what message I want the novel to convey. I think of general story outlines. I begin to write down some characters. I think of the beginning and the end of the novel. These can change many times, of course. Then I start talking to the characters. What would you do if this happens? Why would you do this? What makes you act this way? What if this happens? Is it believable? Before each chapter, I write down story ideas for the chapter. Many times these are a series of questions to myself. When I actually write the chapter, it may not bear any resemblance to the thoughts that were put down on paper in advance. However, just going through that process primes my creative juices.
What motivated you to become an indie author?
I am sixty-five years old. I am full of spit and passion. I do not have fifteen years to spend being rejected by agents and publishing houses. I am excited by writing. My goal is to write one book a year, at least, for the next twenty years. I am confident in my work, confident in my ability to keep improving my skills, and I trust the imagination of characters who reside within me. I will deliver my work to readers who find me. I will help them find me. I pledge my best efforts to write material which will keep giving adrenalin rushes to the readers who honor my novels with their attention.
How do you approach cover design?
From the beginning, the characters and story lines of my novels and short stories conjure images that stay with me. Eventually, some of these images make a good fit with the theme of the story being told. I search stock images to see what comes close and select a few. In the past I have worked with a professional jacket designer and conveyed what was in my mind, with wonderful results for the covers of The Z Redemption and Corvette Nightfire. (I recommend Michael Messina at www.jacketcats.com). Recently, I designed the covers myself for "Nightfire! The Corvette Nightfire Prequel" and my father's art book, An Artist's Life, New Orleans Framed.
What book marketing techniques have been most effective for you?
I love the discipline of Twitter and have used it a lot. So far Facebook gets me plenty of Facebook recognition, but I have not succeeded in converting that to sales. Most of my author page "likes" originate in Mexico. (My two novels have heroic Mexican characters and locales.) Lately I have been experimenting with Instagram. I find that people utilizing Google Plus are generous with their sharing. I realize that leveraging social media will require me to have more material out there.

What has been most effective is starting my own publishing company. My father and brother are also authors. It helps that my dad and I have the same name, so that a search for my name produces a lot of results!
Smashwords Interviews are created by the profiled author or publisher.