Published 2018-10-09.
Who are your favorite authors?
Alexandre Dumas pere, Stephen King, James Gardner, Ed McBain ... I could probably go on, but these are the ones who come to mind. My opinion changes from time to time, but the four gentlemen listed are usually right near the top for me.
Do you remember the first story you ever wrote?
Yes, I do, but it kind of depends upon what one means by "first story." The first fiction of any kind I wrote as a child, about six years of age, back in the 1970s. It was a comic book. I wrote the story, drew the pictures, did the coloring, and stapled everything together. The title was "The Destroyers," and feature super heroes of my own creation as well as well as a handful of heroes from Marvel comics. Spider-Man was a member of the group called The Destroyers, as were characters called Nova and Rom.

As for my very first prose, it would have been a James Bond novel I wrote when I was about 10. I suppose today it would be called fan fiction. It was bad. Real bad. But I guess it showed some talent for a 10 year old. I still have that novel today stuffed away in a box. Every once in a while I break it out to see how far I've come, and to have a few chuckles.

The first of what I consider my "serious" writings came in college when I was 19, and it came about somewhat by accident. I was taking an astronomy class, and a paper was due at the end of the semester. I noticed the professor allowed students to write a fictional short story for the paper, at least as long as some scientific details were included, and I decided to take a stab at it. The story was titled "Entering Jupiter," and while it did include lots of facts about the largest planet in our solar system, it wasn't a very good story. I think of this as my first "serious" writing because it was the first story I ever sent out to an editor. Of course it was never accepted for publication.
What motivated you to become an indie author?
Money.

Okay, I realize that's not the answer everyone wants to hear. We all want to hear the stories about reaching for the heights of literary affluence and the like, but it's not the truth in my case. I lost two jobs within a matter of months in a career I'd been working at for two decades. The economy was tough, and I needed a job. Bills needed paid. After months upon months of trying to land a job with no success, I decided it was time to publish my own works. Fortunately, for me, this was also at the time the whole e-book and indie revolution was taking place.

All that being said, I don't really consider myself an indie writer, though I do self publish quite a bit of my material. I continue to work with traditional editors and publishers for anthologies and other short story markets. Considering that, I think of myself as more of a hybrid author.
Where did you grow up, and how did this influence your writing?
I grew up in central Kentucky in what is called the Bluegrass region, in and around the city of Lexington. Race horses, college basketball, and good bourbon are king there and have been for a long while. Tobacco and coal used to be kings, but they've fallen by the wayside during the last few decades, though they still remain strong in the hills and mountains of Eastern Kentucky.

I tend to think Lexington did not directly influence most of my writing, at least not to my conscious thoughts. I don't write about where I grew up, though I do occasionally plant one of my horror tales in a fictional setting in the rural and hilly portions of Kentucky. That being said, when I venture into more literary territory, I can see more of a Kentucky influence there.

If anything, my fantasy writings might have been shaped a little by my early days as a role player and some of the people I met who also played Dungeons & Dragons and similar games. Obviously, those early influences all occurred in Lexington, though I don't think they are necessarily Lexington-centric, so to speak. However, the gaming shop I went to as a kid was titled "The Rusty Scabbard," and in my fantasy works I have titled a tavern/inn with the same title. The original Scabbard, the store, still exists as a business, but it has moved on to different locations since I knew it several decades ago.
Smashwords Interviews are created by the profiled author or publisher. 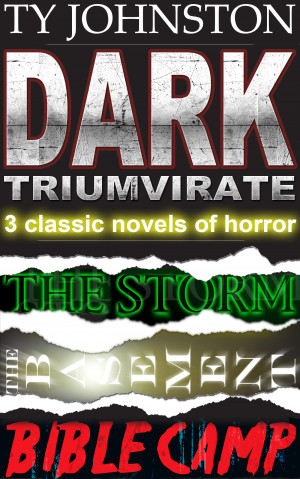 Dark Triumvirate: 3 Complete Horror Novels by Ty Johnston
Price: $7.99 USD. Words: 234,320. Language: English. Published: July 31, 2018. Categories: Fiction » Horror » General, Fiction » Horror » Undead
This specially-priced set contains three complete horror novels. THE STORM A small town in Kentucky is about to learn fear. THE BASEMENT A new house, a new job, the future before them, the Dinsmores thought they had everything. Yet dreams of the good life quickly give way to a reality of darkness. BIBLE CAMP When young people are sent to clean up an old bible camp, none are ready for terror. 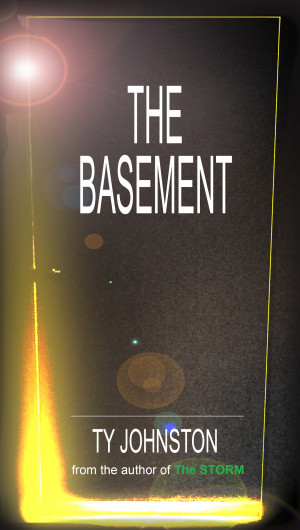 The Basement by Ty Johnston
Price: $2.99 USD. Words: 70,860. Language: English. Published: July 24, 2018. Categories: Fiction » Horror » Ghost, Fiction » Fantasy » Paranormal
A new house, a new job, the future before them, the Dinsmores thought they had everything. Yet dreams of the good life quickly give way to a reality of darkness as the young couple begins to move into their new home. For something looms in the basement of the house, something that brings cold, that brings memories and fear and hatred. 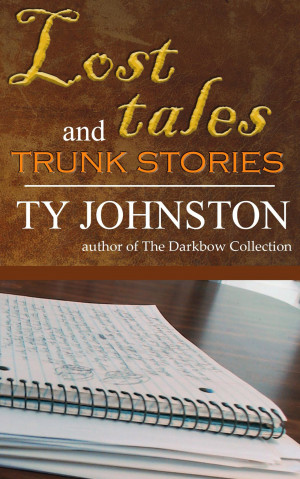 Lost Tales and Trunk Stories by Ty Johnston
Price: $2.99 USD. Words: 42,230. Language: English. Published: March 18, 2018. Categories: Fiction » Fantasy » Short stories, Fiction » Fantasy » General
13 short stories from the fantasy author of The Darkbow Collection and The Ursia Chronicles. Here can be found tales of fantasy, as well as a touch of horror and science fiction, along with a few stories of everyday people facing harsh circumstances, tales early from this author’s writing career, tales that are not perfect, but pose questions and matters of which to think. 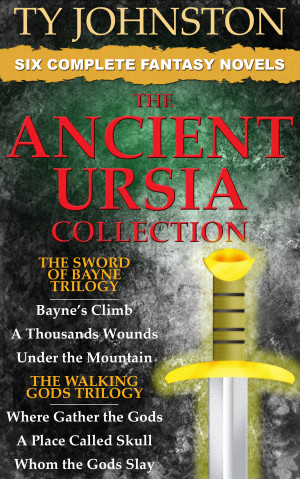 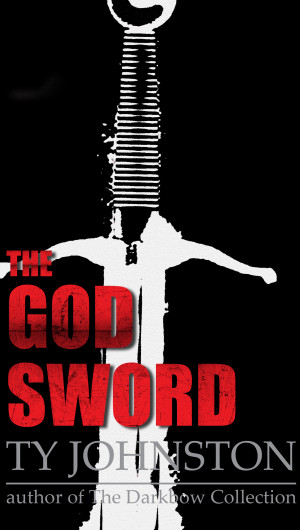 The God Sword by Ty Johnston
Price: $2.99 USD. Words: 76,590. Language: English. Published: November 30, 2017. Categories: Fiction » Fantasy » Epic, Fiction » Fantasy » General
Warrior and general, Lord Kavrik has been tasked by King Osrick to retrieve The God Sword from the city of Gloriolus where the famed blade has resided for untold centuries, in order to fulfill an ancient prophecy which would bring immortality to mankind. Yet when Kavrik lays hands upon the divine sword, he finds not all is as expected. 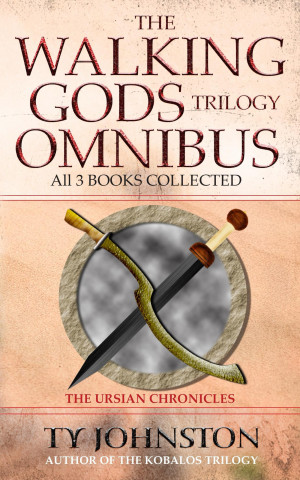 The Walking Gods Trilogy Omnibus by Ty Johnston
Price: $2.99 USD. Words: 136,130. Language: English. Published: February 10, 2017. Categories: Fiction » Fantasy » Epic, Fiction » Fantasy » General
For eons they have wandered the world with little purpose, hiding from their own past and the monstrosities which created them, only coming together once every thousands of years for the Gathering, a time of meeting, a time of conflict. It is time for The Walking Gods to come together, and the future of the World of Ursia will be challenged and changed forever. 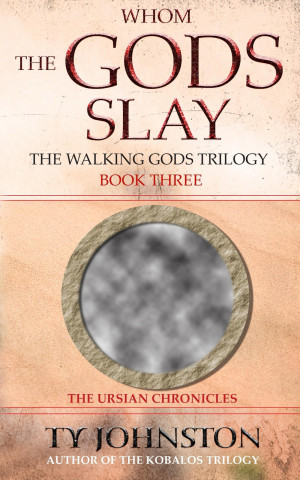 Whom the Gods Slay: Book III of The Walking Gods Trilogy by Ty Johnston
Series: The Walking Gods Trilogy, Book 3. Price: $1.49 USD. Words: 46,360. Language: English. Published: November 20, 2016. Categories: Fiction » Fantasy » Epic, Fiction » Fantasy » General
The time for the gathering of the gods has arrived in the world of Ursia. The very future of man is what lies at stake here. Will the gods continue to wander? Or will they take their place as rulers once more? And what of the mysterious race of Zarroc, those lizard-like beings who created the gods in the first place? 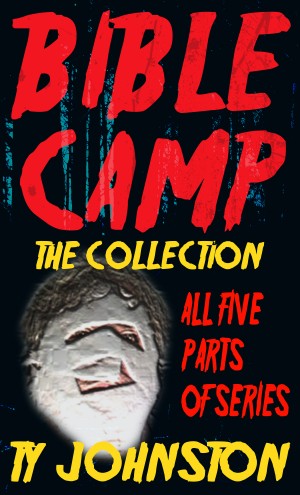 Bible Camp: The Collection by Ty Johnston
Price: $2.99 USD. Words: 59,620. Language: English. Published: September 1, 2015. Categories: Fiction » Horror » General, Fiction » Horror » Crime
Tragedy struck years ago at Jacob’s Bible Camp, and the scars run deep. Practically abandoned for decades, the camp is now ready to open once more. The first to arrive are a group of young people sent from a church. Their task is to prepare the camp for the children. They never get the chance. 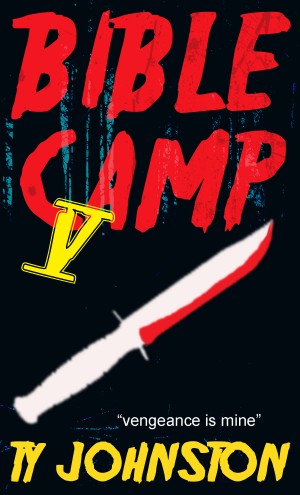 Bible Camp 5 by Ty Johnston
Price: $0.99 USD. Words: 10,770. Language: English. Published: August 31, 2015. Categories: Fiction » Horror » General, Fiction » Horror » Crime
A string of brutal murders at Jacob’s Bible Camp during the past year has left behind shattered corpses while local, state and federal law enforcement has proven ineffective. Now a Special Forces squad has been called in to take down the killer, Thomas “Tank” Tucker.” Into this arena steps another, unknown figure. Dutch has his own mission, going after Tank Tucker, and the stakes seem personal. 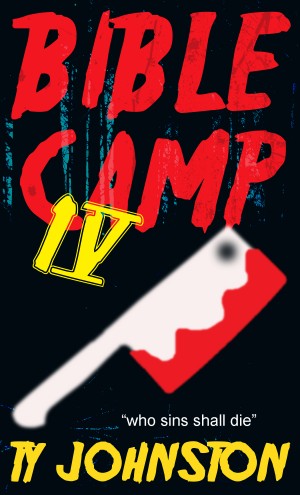 Bible Camp 4 by Ty Johnston
Price: $0.99 USD. Words: 12,470. Language: English. Published: August 24, 2015. Categories: Fiction » Horror » General, Fiction » Thriller & suspense » Crime thriller
A year after Tank Tucker’s killing spree at Jacob’s Bible Camp, six people have gone missing. The local police, state patrol and now the FBI are involved, but so far their results have turned up little. They are not even convinced Tucker is alive, let alone that he is behind the disappearances. The only person to survive an attack by Tucker, Mary Isaacs, has taken it upon herself to lend a hand.
View their profile to see all of their books