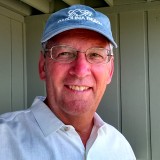 This interview has been viewed 435 times.

Published 2018-01-29.
Question 1) When did you first realize you wanted to be a Sci-Fi writer?
In the third or fourth grade. I wrote short stories with a friend and realized I like to write science fiction the best. I started to write Sci-Fi seriously in 2001. Now that I am retired, I can write full-time or whenever I wish. I try to write and self-publish at least one new book a year.
Question 2) What authors and books inspire your writing?
When I was young, I read everything I could get my hands on. In Sci-Fi, I read all the old masters like Isaac Asimov, Arthur C. Clarke, Ray Bradbury, Robert Heinlein, Frank Herbert, George Orwell, Jules Verne, H.G. Wells; you name them. My favorite Sci-Fi Authors today include Jay Allan, Kevin J. Anderson, Ryk Brown, Susan Collins, James Dashner, Hugh Howey, B.V. Larson, A.G. Riddle, Veronica Roth, John Scalzi, Dan Simmons, Allen Steele, Raymond L. Weil, Rick Yancey and so many more. I still read everything by everybody and find exciting writers everywhere.
Question 3) Are you an extrovert or introvert? How well do you like book signings and other interaction with readers?
I was more introverted than extroverted when I was young. Today, I prefer to be more extroverted and enjoy a good time with good people. I have never done a book signing since I don’t have any hardcover books to sign. All my books are digital. I interact with my readers on social media.
Question 4) What is unique about writing in your genre?
I try to write Sci-Fi stories that have some true scientific basis to them. I like to inform and also entertain my readers. I am not a literary or fantasy type of writer. I use a more informal, conversational writing style. I have an active imagination.
Question 5) Have you ever created a character with an actor or a person you know in mind?
Yes, some of the characters in my stories are based on popular people because of their voice or style. I have used relatives or friends I like as well.
Question 6) What inspires you to write?
I look for ideas from scientific breakthroughs or something that interests me a great deal. Then I create a story around it that I hope will be exciting and entertaining.
Question 7) Are you Self-, Indie-, or Traditionally published? Why?
I am a self-published or Indie author. I have tried to find a literary agent for some of my books, but have not been successful yet. I hope to write a story that makes the best seller list; then I will have achieved one of my writing goals. I will never give up my ebook rights. I want to be in control of my creative works.
Question 8) Do all authors have to be grammar perfectionists; or do you use a Copy Editor?
No to perfectionists, but you do have to avoid grammatical errors and misspellings in your books. I would use a copy editor if I could justify its expense; anything to publish the best book I can. Currently, I do my own editing and revise each book at least two or three times as I update information.
Question 9) “Writing is a get-rich-quick scheme.” And, “All writers are independently wealthy.” How true?
Not true at all. I congratulate successful writers who can actually make a living doing this. In my case, I waited until I retired to have the time to write full-time without interference from work and everyday life. I enjoy writing and plan to continue to do it as long as I can.
Question 10) Plotter or Pantser (free flowing)? Do you write from an outline, or just start writing and go with the flow?
I plot out everything. It helps give me a structure and format I can follow while I write each chapter. My outlines are very informal at first. I try to outline the first 50 chapters of a book and revise as I write. I think I could do free flowing on short stories without any outline. I try to keep my chapters short and tell each story through dialog and each character’s eyes.
Question 11) What is the secret to becoming a best-selling author?
Persistence. And believing in yourself. Practice helps too.
Question 12) Do you write book reviews? How important are reviews for your work?
I do. You can read all my reviews on Goodreads. I only write Sci-Fi reviews and try to find new authors I like to read.
Question 13) Do you have a favorite book or series you have written? Which one?
My best selling series is called The Guardians, Books 1-3. I like all the books I have written and anxiously await for the latest book reviews to see if readers like them too.
Question 14) What are you working on next?
I am working on my latest series, Nanomachine War - Book 2. It will be out by June 2018. It is a Space Opera/MSF story. After that is finished I may work on Book 3 and/or do a Prequel to my other series, UTOPIAS.
Question 15) Have a favorite Author Question? What is it? Please Answer.
Why do writers write? I always wanted to be a writer from the time I could read. I just wish I was better at it. I believe it comes from an inner desire to express oneself.
Smashwords Interviews are created by the profiled author or publisher. 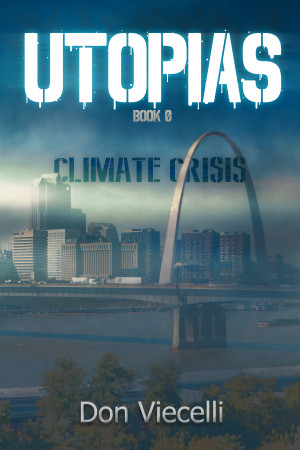 Utopias - Book 0, Climate Crisis by Don Viecelli
Series: Utopias Dystopian Series. Price: $0.99 USD. Words: 83,600. Language: American English. Published: May 27, 2020. Categories: Fiction » Science fiction » Utopias & dystopias
By 2098 the human race is faced with a Sixth Mass Extinction Level Event from extreme climate change conditions caused by humans. The planet is dying. Humans will not be able to breathe the air within five years. They are presented with two choices; enter cryosleep for at least 100 years or die slowly from lack of oxygen, deadly carbon dioxide and other greenhouse gases and rising temperatures. 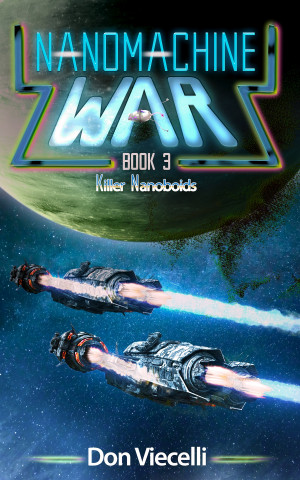 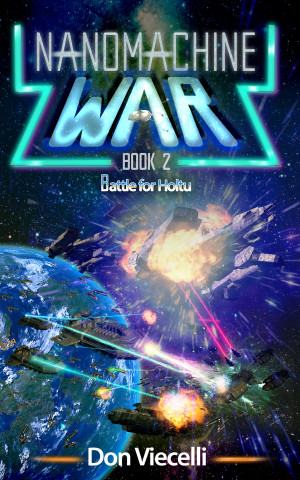 Nanomachine War - Book 2, Battle For Holtu by Don Viecelli
Series: Nanomachine Wars. Price: $3.99 USD. Words: 86,600. Language: English. Published: June 20, 2018. Categories: Fiction » Science fiction » Space opera, Fiction » Science fiction » Military
The Yoyka Imperil Leader Rahta is outraged by his defeat and near death at the hands of the Holtu androids in the Mars Space Battle. Rahta seeks revenge by sending another large fleet of warships to attack Earth, Mars and Holtu with a new version of nanomachines that could mean the extinction or slavery of the human race. 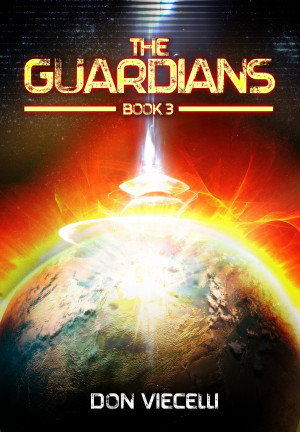 The Guardians - Book 3 by Don Viecelli
Series: The Guardians Series, Books 1-3. Price: $3.99 USD. Words: 94,680. Language: English. Published: June 15, 2018. Categories: Fiction » Science fiction » Space opera, Fiction » Science fiction » Military
The Tyrax are developing a brand new weapon to use against Earth; a weapon so powerful it can destroy whole planets with one or two bombs. They are building a large particle accelerator to create an antimatter weapon to use against Earth. The first opponent to build the weapon will win this Galactic Space War between good and evil alien races. 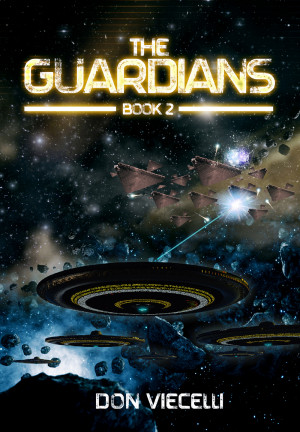 The Guardians - Book 2 by Don Viecelli
Series: The Guardians Series, Books 1-3. Price: $3.99 USD. Words: 89,650. Language: English. Published: June 14, 2018. Categories: Fiction » Science fiction » Space opera, Fiction » Science fiction » Military
The Tyrax first tried to wipe the human race off the face of the planet by using a nanobiotechnology weapon to terraform Earth for their own unique DNA makeup. In Book 2 the Tyrax have returned to finish the job with a large warship fleet and a new weapon they call the Destroyer. The defenders do all they can to try and stop the asteroid from destroying Earth. 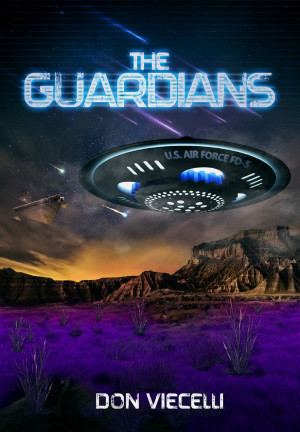 The Guardians - Book 1 by Don Viecelli
Series: The Guardians Series, Books 1-3. Price: $0.99 USD. Words: 109,830. Language: English. Published: June 11, 2018. Categories: Fiction » Science fiction » Space opera, Fiction » Science fiction » Military
A ruthless and merciless race of aliens called the Tyrax send a doomsday weapon that detonates multiple missile warheads over twenty-four sparsely inhabited land areas around the globe. It causes a biological transformation using nanobots that threaten to destroy all life forms on the planet within days. This is only the beginning for survival of the human species. 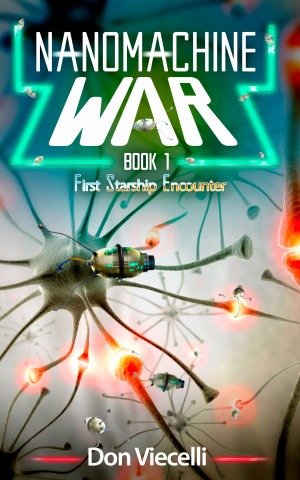 Nanomachine War - Book 1, First Starship Encounter by Don Viecelli
Series: Nanomachine Wars. Price: $0.99 USD. Words: 87,080. Language: English. Published: June 28, 2017. Categories: Fiction » Science fiction » Military, Fiction » Science fiction » Space opera
A large alien starship emerges from hyperspace in our solar system and goes into orbit around Mars. The starship is damaged on the outside and the reasons for its appearance are a mystery. A United Nations Peace Keeping team from Mars is sent to the starship to investigate. What is kept secret by the alien crewmembers threaten the very existence of the human race. 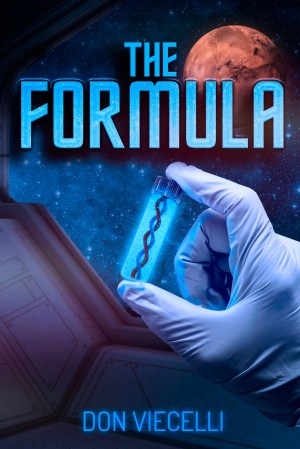 The Formula by Don Viecelli
Price: $0.99 USD. Words: 85,340. Language: English. Published: August 31, 2016. Categories: Fiction » Science fiction » General
The Formula is a suspense thriller that starts with a brutal murder on Ares, a large space station orbiting Mars in the year 2094. Doctor Leif Johanson and his daughter, Ingrid, have discovered the formula for the ‘fountain of youth’. A powerful drug producer wants the formula for himself and will do anything to get it. Only one man can stop him, an aging Homicide Detective named Jack Helms. 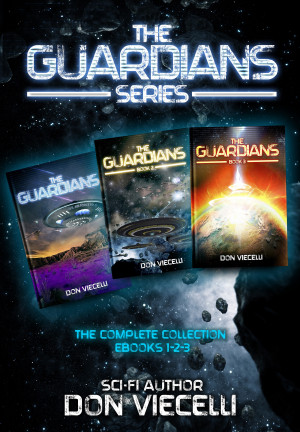 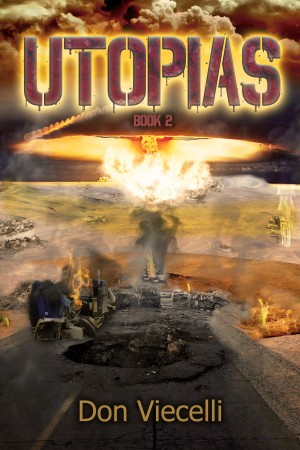 Utopias - Book 2 by Don Viecelli
Series: Utopias Dystopian Series. Price: $3.99 USD. Words: 93,220. Language: English. Published: July 7, 2016. Categories: Fiction » Science fiction » Utopias & dystopias
Premier Tung Wing has taken control of the Eurasia Federation. President Ricardo Carlos of the United Americas Continent (UAC) is doing all he can to prevent war with Premier Wing, but war with the Eurasia Federation is unavoidable. The Battle of Tarim Basin in the Taklamakan Desert in China decides the fate of the world. The only way to stop Wing is for President Carlos to do the unthinkable.
View their profile to see all of their books