This interview has been viewed 325 times.

What is the greatest joy of writing for you?
I enjoy putting together complex material in a way that non-specialists can understand.
Who are your favorite authors?
In the "Science and Religion" area, they would include Alister McGrath, John Polkinghorne, John Lennox and Keith Ward.
What inspires you to get out of bed each day?
Life! I have been retired for four years at the time of writing, but am still usually up and about before 07:30.
When you're not writing, how do you spend your time?
I still do a bit of lecturing (in control systems engineering) and an industrial liaison job, for the university for which I used to work full-time. I am the treasurer of a reasonably large (by U.K. standards) Methodist church, and that takes up a fair amount of time. I give occasional talks on various aspects of the relationship between science and religion. I do a lot of d.i.y. work around my house, and the houses of friends and family (including fairly major stuff) - I am a qualified electrician, apart from my academic qualifications, and I think I have designed and fitted seven kitchens amongst other things. I enjoy hill walking, especially ridge walking. I used to do a bit of rock climbing, but ageing wrists and knees have put paid to serious climbing - I still get to do some hard scrambling on those ridges though. I also play bass guitar and keyboards in bands, I play the church organ (not well!) and cars and motorcycles also take up some time.
How do you discover the ebooks you read?
Apart from just going to the sites of retailers I know, I search the web using "e-books" and keywords which I hope will turn up what I'm looking for.
Do you remember the first story you ever wrote?
I'm afraid not. It will have been in my schooldays though, as everything I have written since then has been non-fiction.
What is your writing process?
Bearing in mind that this is non-fiction, I tend to plan the chapters required, then the sections, then write from beginning to end in sequence. The writing itself is not planned (in other words, I don't write in the mornings and not the afternoons, for example), rather I write whenever I have time. So I can write solidly for a few days in a row, and then not at all for a few days. I find this is OK for non-fiction, because it's easy to keep track of where you are, and what needs to come next. In any case, it is often necessary to break off to check out references etc.
How do you approach cover design?
I do it all myself. I use my own photographs, but cropped, altered, merged, and so on, as required, using GIMP (which is free, but powerful, image-processing software). Text such as titles and blurb can be added in GIMP too, and given any artistic treatment required. Having hardly any artistic talent, I then show the results to artists I know (as well as to potential readers of the book), and take notice of what they tell me, since they know more than I do!
What are your four favorite books, and why?
Just to show that I do read some fiction - I really enjoyed The Book Thief (Markus Zusak). I found it a very interesting, well-told and uniquely-presented tale of life in rural Germany during WW2.

Pilgrim's Progress (John Bunyan) - I like the original seventeenth century English, and I think it is an excellent allegory of several aspects of the Christian journey.

The Clockwork Image (Donald M. McKay) - now rather dated in some aspects (it's over 40 years old). It was the first book on science and religion which I came across, which had that elusive combination of readability and rigour.

Science and Christian Belief (John Polkinghorne) - published in 1994, it is the text of Polkinghorne's Gifford Lectures. I found that it explained a number of things by which I was still puzzled at the time (though it is a bit too "academic" for some tastes).
What is your e-reading device of choice?
I still prefer paper books, and there are getting on for 1000 in my study. However, I also have a Kindle with over 100 books on it - most of which I have actually read!
Describe your desk
Desktop computer, laptop computer, pens, 'phone, but otherwise clear every evening (my wife once bought me a sign saying, "A clear desk is the sign of a sick mind"!)
Where did you grow up, and how did this influence your writing?
Sheffield, England.

It probably hasn't influenced my writing, in the sense that my writing is non-fiction. However, when I was young (in the 1950s) Sheffield was still the home of a lot of heavy industry, and I began my working career in the steel industry in 1975. So that background did probably have an influence on my technical, analytical, outlook - leading to the interest in the relationship between the teachings of the church to which I hd been taken since birth, and my knowledge of science and technology.
When did you first start writing?
My first published book was a control systems engineering university-level text book in 1997. Before that, I had published my PhD thesis in 1983. Prior to that, I wrote the odd set of notes on science and religion for church youth groups, but my only "proper" writing comprised unpublished dissertations on various topics during my university course (I think one on lasers was my first, in 1971).
What motivated you to become an indie author?
In the field of science and religion, I pitched "A Working Faith in an Age of Science" to many traditional publishers. I was initially dismayed by the, "Submit your proposal electronically and, if you have heard nothing in six months, we're not interested," type of approach which many of them seem to adopt.

However, I did manage to enter into some dialogue with a few of them. To be fair to those few, even if they had no intention of publishing my book, they liked it enough to give me some useful advice, which I did (mostly) take on board. However, even so, it seems that this is such a niche market that, even if they seem to like your work, they will not publish your book unless just happens to fit an existing hole in their current list. There is too much competition from established authors for them to take the chance on making the losses from an unknown quantity. One publisher was even honest enough to say that the book needed shortening because they didn't want to have to sell it for £8.99.

In the end, since I'm fairly tech-savvy, and suspected that I would need no help with book templates, book formatting, websites, HTML, cover design and so on, I decided to abandon the attempt at getting published by a traditional publisher.
Published 2014-08-05.
Smashwords Interviews are created by the profiled author, publisher or reader. 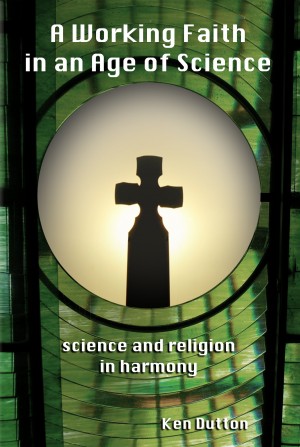 A Working Faith In An Age Of Science: Science And Religion In Harmony by Ken Dutton
Price: $2.99 USD. Words: 78,860. Language: English. Published: August 2, 2014. Categories: Nonfiction » Religion & Spirituality » Religion & Science
This book looks at several difficult questions which arise at the interface between science and religion. It does so in an introductory manner, with the science being presented in a "popular science" style. The target audience is from late teenage onwards, so no degree is needed. It argues that there need be no conflict between an authentic religious faith, and the findings of modern science.