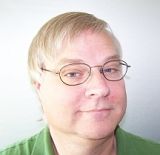 Interview with Eric B. Thomasma

Published 2013-08-23.
Where did you grow up, and how did this influence your writing?
I grew up in Grand Rapids, MI and I still live in the area. My family were and are readers, and the Grand Rapids community has always supported a robust library system with several smaller neighborhood libraries, a huge downtown library, and well stocked school libraries. Growing up, reading was encouraged and supported in nearly every aspect of my day-to-day life, underscoring the importance of books in our society, and the authors that write them. Going to the library as a small boy and being able to pick out stories like Harold and the Purple Crayon instilled a love of reading at an early age. It is my hope that my books can instill the same sense of awe and wonder in today's young readers, and awaken their imaginations.
What is your e-reading device of choice?
There are so many different models and makes of e-readers and tablets out there and most of them I've only seen on-line and haven't had the opportunity to try, so I can't recommend one over another. However, I did receive a Kindle from my wife as a Christmas gift a couple years ago and it's been my constant companion ever since. I got an inexpensive tablet for my wife and have enjoyed using it as well, but between the two, I prefer the Kindle's e-ink screen for reading.
When did you first start writing?
That's hard to say. I've been telling stories since before I knew the alphabet, but very few of them were ever written down. In high school I wrote poetry and song lyrics to help relieve all that teen-age angst. Then I went to work, got married, had a family, and basically forgot about writing, although I did write the first draft of my children's book, Sam and the Dragon, during those years. Then, when I was in my late forties, my Dad got cancer. I became his driver and found myself spending a great deal of time in waiting rooms, treatment rooms, patient rooms, and the like with nothing to do but wait. I started bringing my laptop with me, but in those days, wireless internet was not as ubiquitous at it is today so, unable to get on the internet, I started entertaining myself by writing a story. It helped pass the time and in a way, let me escape the depressing circumstances. That story eventually became my first novel, SEAMS16: A New Home, which I published in 2007. So in some ways I've been writing all my life, but in other ways, it's only been a few years.
What's the story behind your latest book?
My most recently released book is Yeti In The Freezer and it came as a direct result of my niece asking for a story about, you guessed it, a yeti in the freezer. Her kids were wary of the sound their freezer made when ice was being made and were constantly asking what that noise was. She told them it was just the icemaker, but that didn't seem to satisfy their curiosity so one day she just told them there was a yeti in there. For some reason, they thought that was a much more reasonable answer and stopped bugging her about it.
What motivated you to become an indie author?
Ignorance.

When I finished my first novel, I liked it so much I wanted to share it, but I knew nothing about the publishing process. I went on-line to find out how to get it published and found hundreds of articles saying you can't because publishers no longer accept manuscripts from authors, only from agents. And then I found hundreds of articles on what horrible creatures agents are, and that if you really want your book published, you should send "us" tons of money and we'll do it for you.

Of course, most of this was all poppycock, but I didn't know any better. I was discouraged since I didn't have the resources to buy into these "publishing deals" (which, as it turns out, is a good thing since so many of them are scams). Then I found out about print/publish on demand, where I could get my book into print without any up-front costs, but I had to do all of the prep work myself. I've always been a do-it-yourself kind of guy, so this seemed an ideal solution. I had no idea what I was getting myself into, but I discovered a whole community of writers out there willing to help. I did my best, made mistakes, learned and improved. Overall it's been a very rewarding experience and I'm pleased to have gone the indie way, but I'm not over-zealous about it. You see, I've also since learned the facts about traditional publishing and there are features of that process that I find attractive. Given the option, I would have to give serious consideration to a publishing contract.
What are you working on next?
I'm currently working on my fourth novel in the SEAMS16 Sci-Fi series and a new children's book.

The novel, as yet unnamed, returns to the storyline of Charlie and Susan Samplin on board the Space Equipment Authority's Maintenance Station #16 (SEAMS16). It includes family dynamics, religion, politics, espionage, abduction, intrigue, action, and more.

The children's book is something new for me. It's a poem that I wrote after a recent visit to the optometrist to get my glasses repaired. After reading it through, my wife came up with the perfect title- Everyday Wonders. I'm currently working with my illustrator on a concept that's different from anything we've done before, but I'm hoping will underscore the theme of the poem.
Smashwords Interviews are created by the profiled author or publisher. 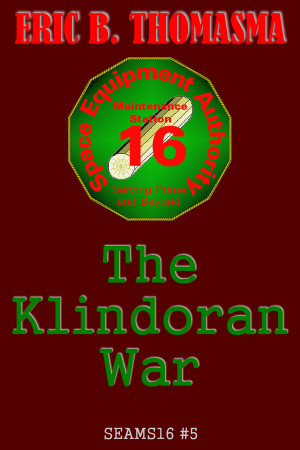 The Klindoran War by Eric B. Thomasma
Series: SEAMS16. Price: $2.99 USD. Words: 149,710. Language: English. Published: July 6, 2017. Categories: Fiction » Science fiction » General
Prime has a planetary neighbor—Klindor. In ancient times, a Klindoran astronomer witnesses an event that plunges their society into centuries of war. The people of Prime have fallen on hard times. It’s a time of darkness and violence…and just as they’re emerging from those days of sorrow, the inconceivable happens…the Klindorans arrive. The Klindoran War - Book 5 in the SEAMS16 series. 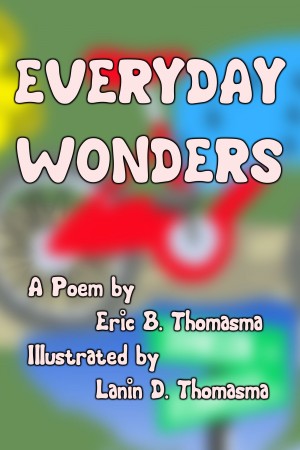 Everyday Wonders by Eric B. Thomasma
Price: $2.99 USD. Words: 660. Language: English. Published: August 22, 2014. Categories: Fiction » Children’s books » Concepts / Senses & Sensation
Everyday Wonders is dedicated to everyone who got glasses as a child, or has a child who needs glasses. A youngster getting his first pair of glasses suddenly sees things he's never seen before! This book was designed to help explain what it's like to friends and siblings who don't need corrective lenses. 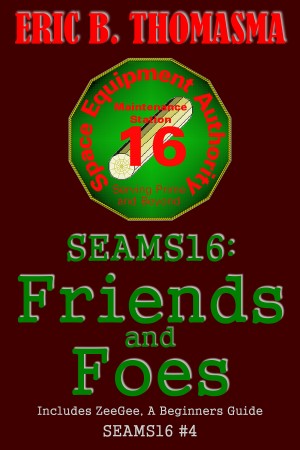 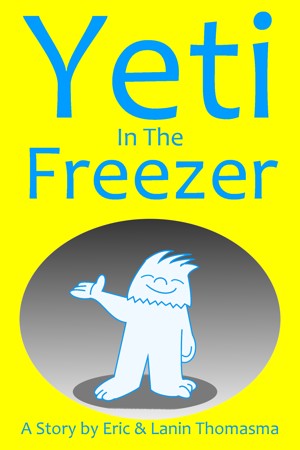 Yeti In The Freezer by Eric B. Thomasma
Price: $2.99 USD. Words: 1,470. Language: English. Published: November 24, 2012. Categories: Fiction » Children’s books » Legends, Myths, Fables / General, Fiction » Children’s books » Social Issues / Manners & Etiquette
Do you have a freezer that growls when ice is being made? Brady and Dot do, and it’s a little scary. But they’re no longer afraid, now that they’ve made friends with the Yeti In The Freezer. 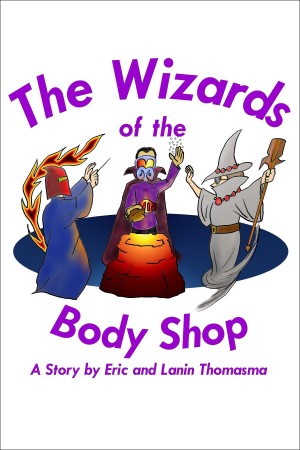 The Wizards of the Body Shop by Eric B. Thomasma
Price: $2.99 USD. Words: 1,570. Language: English. Published: March 13, 2012. Categories: Fiction » Children’s books » Cars, Fiction » Children’s books » Business, Careers, Occupations
Repairing a crumpled fender is pure magic. So when Cindy’s Daddy’s car gets damaged, she goes along as Daddy takes it to The Wizards of the Body Shop. Selected for the 2013 KART Kids Book List. 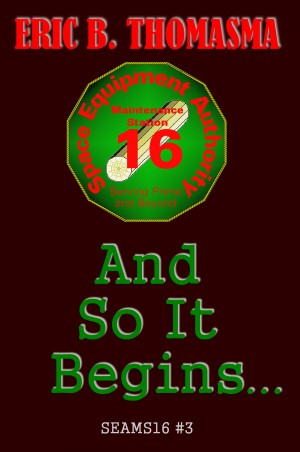 And So It Begins... by Eric B. Thomasma
Series: SEAMS16, Book 3. Price: $2.99 USD. Words: 109,480. Language: English. Published: August 30, 2011. Categories: Fiction » Science fiction » General, Fiction » Science fiction » Adventure
This book is part of the SEAMS16 series, but it is not a SEAMS16 novel. There is no Space Equipment Authority Maintenance Station 16, no one named Charlie, and no ZeeGee matches being played in a field of poles. This story is a leap back in time to the events that started the society that the SEAMS16 residents come from. And So It Begins... 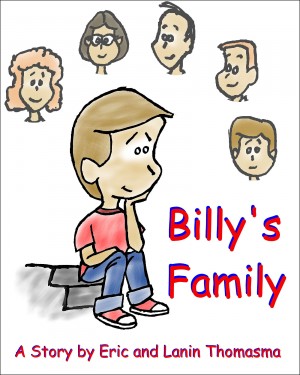 An only child, Billy wishes for a bigger family. But spending a day at his great-grandfather’s family reunion shows him that ‘family’ includes far more than just Mommy and Daddy. Billy’s Family is an introduction to some of the terms and concepts of family relationships. 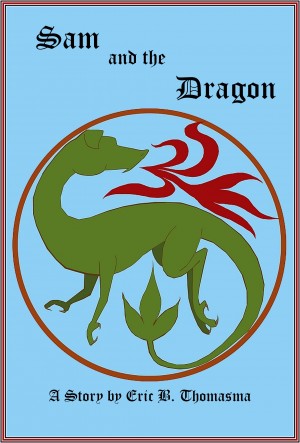 Sam told his mother, “It really doesn't get cold. That’s just a myth, like dragons and unicorns.” But he soon learns the truth about winter... and dragons. Sam and the Dragon - You'll never see your furnace the same way again. Winner of the 2011 KART Book List 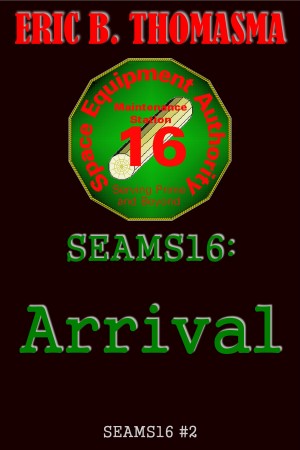 SEAMS16:Arrival by Eric B. Thomasma
Series: SEAMS16, Book 2. Price: $2.99 USD. Words: 108,440. Language: English. Published: March 16, 2010. Categories: Fiction » Science fiction » General
Picking up where A New Home left off... Charlie and Susan are shocked when the confession is thrown out. To insure the safety of the alien devices the judge then orders that the trial be held on SEAMS16. Aliens appear, but not for repairs, bringing a surprise visit from the S.E.A. Security Director. With all of these arrivals, can Charlie and Susan handle one more? Prepare for ARRIVAL. 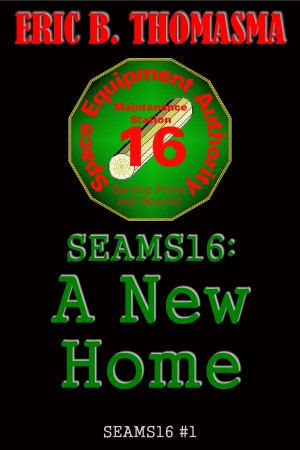 SEAMS16:A New Home by Eric B. Thomasma
Series: SEAMS16, Book 1. Price: $2.99 USD. Words: 109,450. Language: English. Published: March 15, 2010. Categories: Fiction » Science fiction » General
Someone wants Charlie to come work at the Space Equipment Authority Maintenance Station 16, the best of all the repair depots in the system. Life hasn’t been easy for Charlie, but the one shining light in his life is and has always been his beautiful wife, Susan. So is this the chance of a lifetime, or is it too good to be true? Join Charlie and Susan as they discover A New Home.