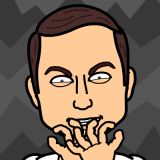 Published 2014-01-14.
What inspires you to get out of bed each day?
The looming spectre of unemployment. No, actually I'd have to say my dogs. I have two of them, and they mean the world to me.
Describe your desk
"Desks", you mean. The luxury of being a single male homeowner is being able to have as many desks as you damned well want, thank you very much. Right now I'm writing this in bed with a wolf hybrid snoring at me, but earlier in the evening I was sitting at my nice, clean, aesthetic dot-com-relic Biomorph desk while looking out my second story window at the city lights. And even earlier than that, I was sitting at my downstairs work desk, salvaged from another failed company's electrical engineering lab, while I listened to Rammstein. I find myself drawn to each desk at different times, and I'm not quite sure why myself.
When you're not writing, how do you spend your time?
When I'm not writing, it's usually projects for other people. Half of them tend to involve firearms... Brent Allen from my "She Wore..." series is almost autobiographical, except that he has a way better body, and a lot more female attention.
What is your writing process?
Sit down, write, and let the characters tell their own story. Once you get going, the stories write themselves. The hard part is editing afterwards, when you're trying to make the narrative work. When things change in my stories as I'm going, I'll jot down a note that I need to fix continuity, and then once I've finished the draft I'll go back and pay attention to all those notes. Usually along the way, I end up adding a few more scenes, some dialogue, and ... well, sometimes I end up making more "Hey, don't forget to change THAT TOO!" notes for myself while I'm in there. It can take longer than writing the story to begin with, but it feels to me like it's more of a story than if I were to write an outline and then stick to it religiously.
What is your e-reading device of choice?
Whatever is in my hand at present! Seriously, it's an awesome time for readers. I can do a network sync to read on my cellphone, my tablet, my Linux box - they all handle the same formats.
What motivated you to become an indie author?
A nearly sexless marriage! So, I set out to write sex so over the top and impossible that the fantasies I was transcribing would never interfere with my marriage. So when I wrote "Progenitor" and "Merlin's Magic Wang", they were intentionally outside the realm of possibility. That made me an author - but what made me a commercial author was a fan who pointed out that she'd paid money for a lot worse stories than mine. Not to sound too egotistical, but after sampling some of the stuff that was selling well at the time, I lost the guilt I'd originally had at the thought of charging for what I was writing.
How do you approach cover design?
By letting someone else handle it! Seriously, I've never been gifted at graphic design. I can do all right with simple geometrical designs and such, but when it comes to composition I'm kind of hopeless. Pro cover artists are worth the relatively small fees they charge.
What do you read for pleasure?
I've become more an more a fan of the "Libertarians With Freakin' Huge Guns" genre. Larry Correia, Michael Z. Williamson, and John Ringo are the main authors I read for pleasure, and frankly between the three of them they put out more books than I get around to reading in a year anymore.
How has Smashwords contributed to your success?
Smashwords is the first place I published anything, and to be honest if they handled Amazon directly for everyone, I probably wouldn't bother using any other sites. The submission process at Smashwords certainly does wonders for working on your basic formatting skills, and learning to adhere rigorously to the style guide has definitely made me a better publisher even for things which are posted to other sites.
When did you first start writing?
Around age eleven or so... basically my own take on something like the Transformers or Go-Bots. I'm not sure whether I'd have been better or worse off if I would've just written Transformers fan fiction to begin with, but that thought never did occur to me.
What is the greatest joy of writing for you?
The most awesome thing for me is to see a female fan say, "Well, your latest story made me practically rape my husband when I got home." Some guy out there got extra-lucky because of something I wrote! If there's anything out there like karma, I'm really looking forward to the payback on that.
Smashwords Interviews are created by the profiled author or publisher. 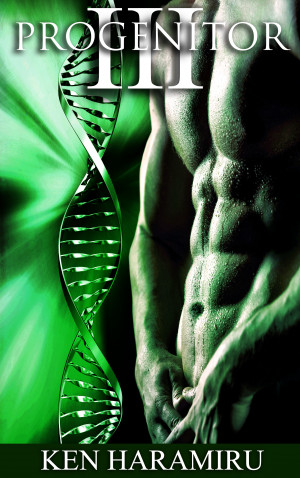 Progenitor 3 by Ken Haramiru
Series: Progenitor. Price: $2.99 USD. Words: 30,310. Language: English. Published: April 10, 2017. Categories: Fiction » Erotica » Sci-Fi Erotica, Fiction » Erotica » Menage/Multiple Partners
When a pair of cute college girls invite the Progenitor back to visit their sorority house, turning them down isn’t an option. Before long we learn that one of the girls has a breeding kink, and she quickly figures out that Phil’s alien-given gifts can bring about her ultimate personal fantasy: Being just one of an entire college full of pregnant co-eds, all due around the same time! 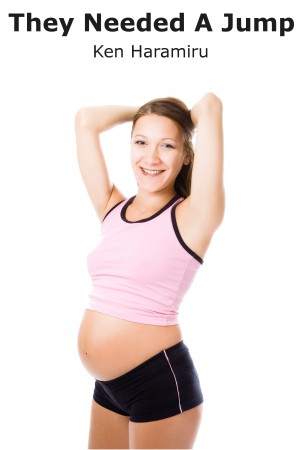 When two gorgeous pregnant women are stranded by a run-down battery, a man passing by decides to help them out. When they need a ride to the auto parts store, it doesn't take long until the duo's neglected sexual appetites come to the surface. The fact that their good Samaritan has a kink for pregnant girls means he's all too happy to help! Warning: Contains graphic sex scenes, but no magic/sci-fi 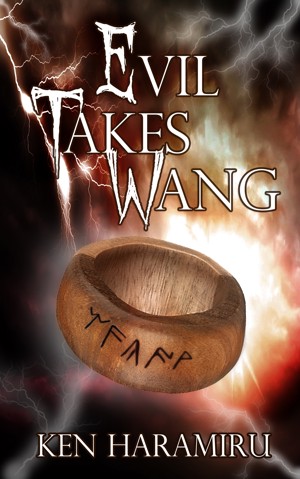 Evil Takes Wang by Ken Haramiru
Series: Breeding Camelot Style, Book 3. Price: $2.99 USD. Words: 28,070. Language: English. Published: January 12, 2014. Categories: Fiction » Erotica » General, Fiction » Erotica » Paranormal
Eric's bonded to a demon, and wants free. So when the demon offers him his freedom if he'll use an ancient relic, Eric jumps at the opportunity. He doesn't expect the relic to fuse to his body, causing his penis to teleport into any woman he becomes aroused by. A local cult plans to use Eric to reincarnate their god Mordred. Now Eric must rely on his demon to escape! 28,000 words. 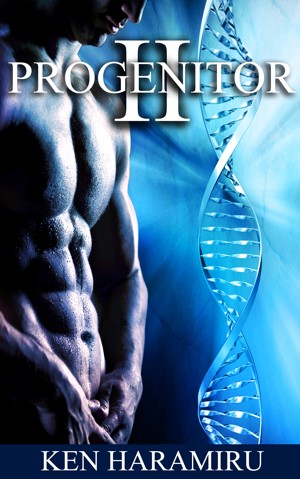 Philip's new body is designed to usher in the next wave of human evolution, but that power comes with a price. His alien pheromones have no off switch, no pause button, and absolutely no downtime. Philip's greatest challenge is trying to blend into a world where every woman wants to rip his clothes off. Contains graphic sex, pregnancy, and egg laying 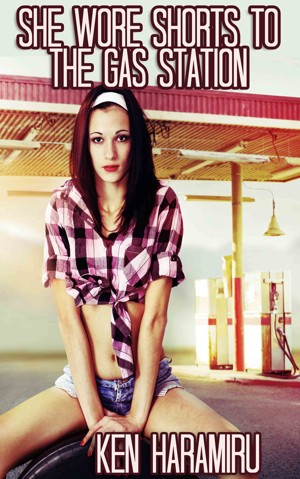 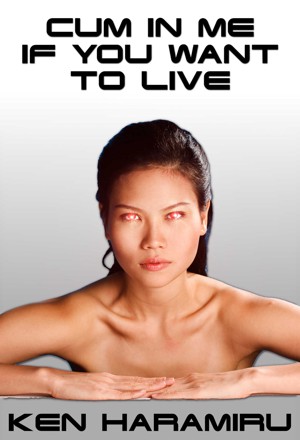 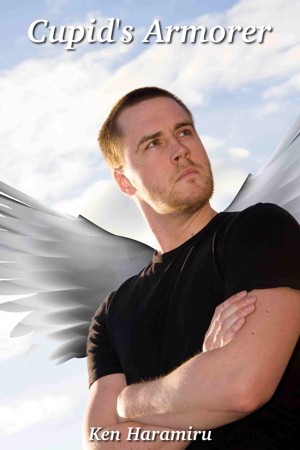 Cupid's Armorer by Ken Haramiru
Price: $2.99 USD. Words: 16,350. Language: English. Published: March 13, 2013. Categories: Fiction » Erotica » Paranormal, Fiction » Erotica » Action/Adventure
In this 16,300 word story, the archangel Michael gets one last chance to save the failing Cupid division of his angels. Human hearts have hardened so much over the last fifty years that Cupid matches are just as likely as human matches to end unhappily. So, Michael decides to let recently-deceased brand-new angel Clint try changing over the Cupids' now-inadequate bows and arrows to modern guns. 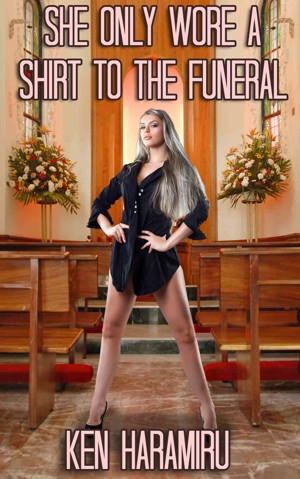 At a funeral, Brent can't help but notice a woman attending in what looks like just a black shirt. From the glimpse of panties as she sits down, to the knowing grin she gives him as he leaves, there's something special about this encounter. The reception brings a debate about whether she's wearing a shirt or a dress - but the answer stops mattering once it's crumpled up on the floor! 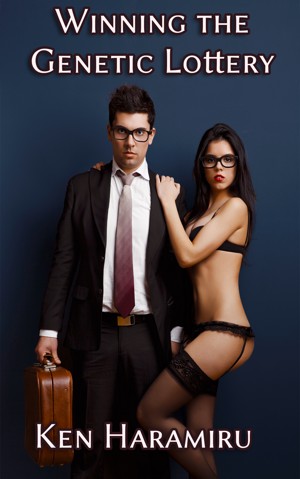 Winning the Genetic Lottery by Ken Haramiru
Price: $2.99 USD. Words: 34,560. Language: English. Published: January 14, 2013. Categories: Fiction » Erotica » General, Fiction » Erotica » Menage/Multiple Partners
In this 35,000 word story, a trillionaire offers a billion dollars to whoever has the most entertaining use for it. Jim flippantly posts, "I’ll get more women pregnant than any man before me." Little did he know when he hit send, that he'd get chosen! Now newly minted billionaire Jim must now make good on his promise to set a new world record. 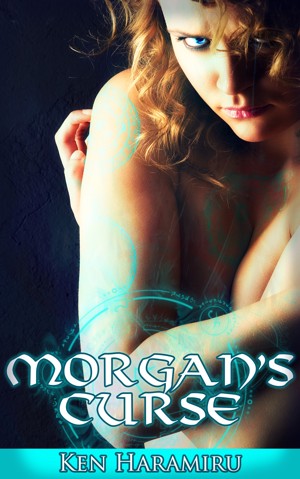 Morgan's Curse by Ken Haramiru
Series: Breeding Camelot Style. Price: $2.99 USD. Words: 26,630. Language: English. Published: December 16, 2012. Categories: Fiction » Erotica » Sci-Fi Erotica, Fiction » Fantasy » Contemporary
Over a thousand years ago, Merlin cursed his cheating lover Morgan Le Fay to switch bodies every time she has sex. She's doomed to inhabit either a pregnant female body or a near-powerless male one, forever. She and her succubus servant are determined to end the curse by killing Merlin while he's still a helpless infant. This story contains the following content: sex, pregnant sex, and birth.
View their profile to see all of their books