This interview has been viewed 90 times.

What is your writing process?
My writing process has changed over the years. I used to just sit down and write and see where that took me. My first novel took forever (I am now editing it for potential release). My second one, Lifewalla, took long as well but after the first complete draft, it got sent out to publishers by my then agent. Unfortunately 2008 was a tough year. Publishers didn't bite and I had some tough family responsibilities for a few years, which meant I wasn't able to work on the novel again for a few years. Life experience marinades stories though, and I can only assume the book has some of my processed and raw emotions. It's a tough story but also with some light relief, and it got some good reviews from subject matter experts. So, ultimately, I was happy about the new route it ended up taking, fundraising for survivor clinics in Bhopal, the city that inspired the story.
What do you read for pleasure?
I use to read literary novels for pleasure. Now they are work as well. So I tend to read crime novels for pleasure... although now I want to write one! So who knows. They might become work as well!

I also still read the Indian Amar Chitra Katha and Panchatantra series that I used to as a child. They are like graphic novels and I find it quite nostalgic and somewhat comforting to read them. The former series was largely mythological stories and the latter a series of fables with mostly animal characters. Have a look when you get a chance and let me know what you think.

http://www.talesofpanchatantra.com/elephants-and-the-king-of-mice
http://www.amarchitrakatha.com/int/?___from_store=0&___store=international
Where did you grow up, and how did this influence your writing?
I grew up in Nairobi, Kenya. My first formally published story in book form was with a Penguin anthology that had migration as a theme. So that story was 100% influenced by where I came from. In Kenya, the Indian diaspora tended to live in a close-knit community, with Indian cultural events, festivals, languages, films, etc. So, although I have never lived in India, I feel close to my perspective of being Indian, inherited from my parents and our friends and family. I went to a local primary school in Nairobi so had a very mixed friend circle, which opened my eyes to the differences in people's lives. Some of my black friends unfortunately struggled more than I had ever considered possible. No lunch. Being hit by teachers with no-one to support them. In such cases, I'd tell my Mother. She'd pack me double lunches to share. She'd come to school and take the headmaster to task for any unfair punishments of kids I'd told her about. The Head was good and would reprimand the teachers in question. It meant I was caned more than ever by teachers who may have objected. I was an A-grade student, so had never been caned before. But such punishment was commonplace there. I think the worst thing was when a teacher asked me to cane other children who didn't get the right answers. He also called me to the staffroom and asked me to crawl under the table and pick up bones and meat pieces that had fallen from their lunch. I was a vegetarian and this did upset me. I didn't raise it with my Mum, partly because I didn't want any more punishment like that, even though I wasn't sure they were related. I am sure some of my writing now has much to do with fairness because of that early exposure to such incidents.
What motivated you to become an indie author?
I had an agent who had sent the book out to more mainstream publishers. Although the feedback was generally good, there were no takers. Some had genuine issues with the style, but also seemed to be a barrier in terms the book having an Indian story. Publishers have limited slots and sometimes the feedback seems dot be based on them already filling a quota for diverse stories. I understand it's a business, but I realise then the route might need to be different. As it happens, my publisher has been amazing for having the profits go to the Bhopal Medical Appeal. And I am pleased that that was able to happen.
What do your fans mean to you?
A tremendous reassurance. The first time someone told me they loved my book was an incredible moment. I wasn't sure whether they were being polite at first. Then they talked about the various moments that touched them and the effect on them still. It was surreal and magical.

The same thing happened after a professional reading of my play, Familiar Strangers. The actors were brilliant, but even so, I seemed to focus on the things I should have done differently. The audience reaction was so overwhelming and positive that I started to finally accept they might be telling me their honest reactions rather than than simply being nice. Who wouldn't appreciate that?
What inspires you to get out of bed each day?
Honestly, I wish we had another 10 hours to the day. But I get out of bed always with the thought about having to do so many things.

If I am seeing my nephews, I have a lot of energy that rises to the surface. I'm working on a book idea with one of my nephews at the moment and that's got some real vitality. My other nephew is going to teach me about vlogging, so we'll see.
How has Smashwords contributed to your success?
Not much as yet, but I hope to see some results soon with the availability of the book across various platforms.
When did you first start writing?
I have written for pleasure off and on since a young age. Then, even when I had a high-pressure corporate job, I wrote for pleasure on planes and in hotels. It was relaxing to me in the same way as others may have found a run or massage. I didn't like journalling which is people often cite as a de-stressor. For me, it's stories. Often ones in far flung places.
Do you remember the first story you ever read, and the impact it had on you?
I don't think this was the first story I read, but it certainly had an impact on me. I mentioned the Panchtantra series somewhere else in this interview. One of those stories was my earliest memory of reading that has stuck. I loved the idea of stories being told in graphic form. Graphic novels have been in India for some time for good reason. I even have the Mahabharata and Geeta in that form. But back to Panchatrantra. I read a story called, 'Elephants and the King of mice', a fabulous children's story. It has the moral: 'Never underestimate anybody by their appearances.' And that resonated very strongly. I also took these at face value and lived literally by the moral of each story. Perhaps all my siblings did. Maybe that's why my parents bought tonnes of these!
Do you remember the first story you ever wrote?
I don't remember the first story I wrote but I remember the first story I won a competition with. I was around 11/12. I used to go to a Sunday kids club in Kenya, called Kalaniketan Shishukunj. They ran annual competitions. The writing competition had over a hundred of us scribbling away in the big hall for an hour or so. I just remember my character kept getting faced with hurdles and having to jump over those and through hoops, before finally getting to the end. I can't remember what the goal was... maybe just getting to school on time. But it was great fun to write and I couldn't believe my luck when I won the competition! I am still in contact with many people from the club so it's really a great memory to treasure.
Describe your desk
I have a corner desk in my study, and its made of metal tubes and black ply. It's quite big and I have a great view. But for some reason, I gravitate towards my kitchen table where I have a view of the garden. So my laptop veers between the two. If I have started work in one place, I tend to return to it whilst completing it. Maybe the fact the beverages are in the kitchen also has an influence!

In my study, my desk has a set of books, photos and in/out box. It's busier than I'd like it to be. But once I am in the zone, I don't notice much else. More than often I find things around the house left where they are for days because I haven't noticed. That's when I have been in the zone most.
What's the story behind your latest book?
The best answer to that is on this page:
http://bhopal.org/sir-mark-tully-and-lifewalla/
What is the greatest joy of writing for you?
Reader reactions, if they are positive!
Who are your favorite authors?
There are many, but Rohinton Mistry and Arundhati Roy had the biggest influence on my writing. Mistry because his book, 'A Fine Balance', was so simply written with profound impact. Roy because she had a simple human story written in the most beautiful language.
What are you working on next?
I am currently writing a script for a short stand-up gig, and will extend it for longer ones. I am also working on a stress management book, a redraft of my play and editing of my first book to send out. I tend to work on a few projects at once, and that is also true of my reading patterns. I do tend to have various ideas I start working on and the one that captures my imagination the longest wins.
Published 2017-03-03.
Smashwords Interviews are created by the profiled author, publisher or reader. 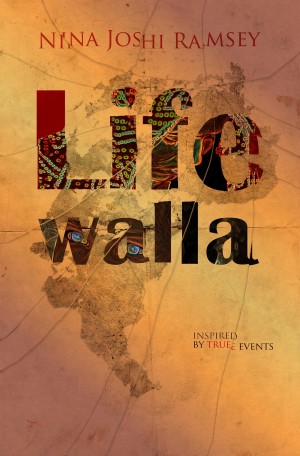 Lifewalla by Nina Joshi Ramsey
Price: $7.99 USD. Words: 89,500. Language: English. Published: July 25, 2016. Categories: Fiction » Literature » Literary, Fiction » Thriller & suspense » Psychological thriller
'[This] is going to be a big hit!!...I'd never read anything like it' (Concourse Magazine) Lifewalla is an unforgettable portrait of loss and pain. It is a deeply moving story of the humanity that could be experienced in a family of strangers. A story of the instinct to grapple for a child's survival, with indestructible hope.