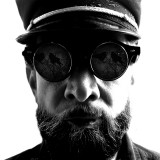 This interview has been viewed 7102 times.

When did you first start writing?
First Grade. My first story was about overalls and why everyone should wear them.
What motivated you to become an indie author?
Funny horrific ideas occur to me on a regular basis. Writing them down seemed like a simple way to prevent them from eating me inside out. Putting them out there for other people to read seemed like a simple way to keep the neighborhood kids off my lawn.
Where did you grow up, and how did this influence your writing?
I grew up in the rural American South. It might occasionally influence my colloquial word choices. Other than that, I don't really think it does influence my writing. I write short tales of dark comic horror. Is there any place in this world that it doesn't exist? Aren't we all just residents of Planet Internet now anyway?
What is the greatest joy of writing for you?
Concluding it. Don't get me wrong. I have to write. And there is a part of me that enjoys the process. But to actually put the final touches on a writing project is my very favorite part of it all. What can I say? I guess I like endings.
What is your writing process?
I'm more of a seat-of-the-pants type of writer. You might find a few paragraphs of idea lying around, but you'll rarely find me with a completely functional outline for a piece. I form an ultimate critical scene in my head, then I write narrative to explain how everything culminated in that scene. After a first draft of that process, I go back and rewrite and fill in the gaps, add some logic and realism, and generally polish things.
How do you approach cover design?
I hire it out. I am neither a graphic designer nor an artist. If you want a cover done right, hire a pro. If nothing else, it frees you up to do what you do best: write. Or rewrite. Or edit. Or...wait, was all that grammatically correct. CRAP! Now I've lost my train of thought.
What book marketing techniques have been most effective for you?
None, because I really don't market my books. They're out there. If people find them, I hope they read them. At present, I'm really only writing and publishing because I think it's fun.
What do your fans mean to you?
You mean that one guy in Canada that downloads and reads my stories when they become temporarily free on Amazon? He seems nice.

No, seriously. The folks who read my work are awesome, and not just because they read my work. It makes me feel good to know that other people can take what I've written and get some kind of emotion out of it. I also don't mind a little constructive feedback now and again.
What inspires you to get out of bed each day?
The need to urinate. Well, that and the fact that I need to earn a living.
Describe your desk
My desk can mirror my mood. The content of the desktop is therefore always in flux. If I'm having trouble staying awake it might hold a cup of coffee. If I'm in a dark place, I might sit my Halloween skull atop it. If I'm feeling particularly unstable I might recite Hamlet's graveyard soliloquy to that skull while I browse meaningless quibbling and status updates on social media. Most of the time, my desk simply serves as a stand for my computer. And a clown nose.
Who are your favorite authors?
I expect that very few authors in my genre could answer this question without citing Stephen King. I will admit that the work of his early career was most influential on me. That said, I also like Joe Hill (Stephen King's son), Thomas Harris, Anne Rice, J.K. Rowling, and many, many, many more you've probably never heard of.
When you're not writing, how do you spend your time?
Reading, naturally. There's also some television and music in there. Stephen King said it best, though. To paraphrase him, you can't write if you don't read. So, read. Read. Read. Read. Read. Read. Read stuff that you like. Read stuff that you don't like. Read stuff that makes you fall in love. Read stuff that royally pisses you off. In the end it's all to the good.
What are you working on next?
More dark comic horror. Always. I have several projects in various stages of the process. Eventually, one of them will carry me away and become the next thing I put out there for people to read.
Published 2014-03-27.
Smashwords Interviews are created by the profiled author, publisher or reader. 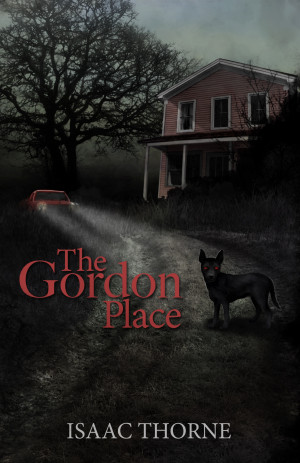 The Gordon Place by Isaac Thorne
Price: $2.99 USD. Words: 98,520. Language: English. Published: April 15, 2019. Categories: Fiction » Horror » Ghost, Fiction » Horror » Weird fiction
Lost Hollow constable Graham Gordon just walked into his abandoned childhood home for the first time in twenty years. Local teenagers have been spreading rumors about disembodied screams coming from inside. Now, thanks to a rickety set of cellar stairs and the hateful spirit of his dead father, he might never escape. 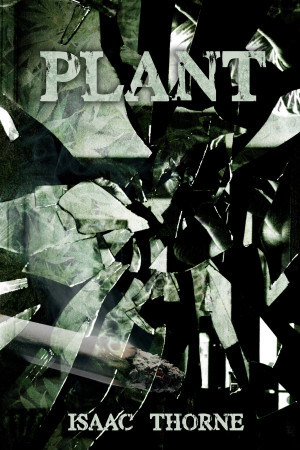 Plant by Isaac Thorne
Price: $0.99 USD. Words: 5,410. Language: English. Published: October 13, 2017. Categories: Fiction » Horror » Crime
Can Joe escape the shadows of his past and prevent himself from getting killed in the process? 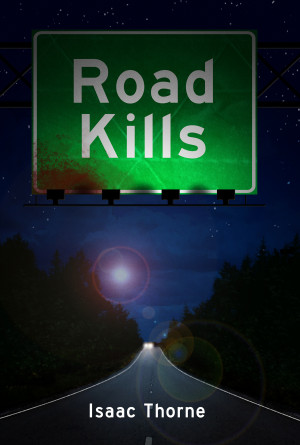 Road Kills by Isaac Thorne
Price: $2.99 USD. Words: 86,180. Language: English. Published: October 1, 2017. Categories: Fiction » Horror » General, Fiction » Humor & comedy » Black comedy
ROAD KILLS is a collection of short tales of dark comic horror from the mind of Isaac Thorne. These stories are all connected to travel, to the road. After all, it is always lurking there, quiet and dark, just waiting for you to come out for a drive or a walk or a jog. However you next confront it, the road is already there, plotting. 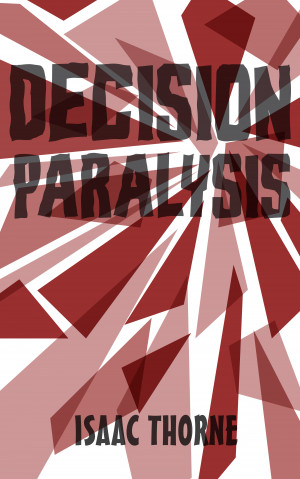 Decision Paralysis by Isaac Thorne
Price: $0.99 USD. Words: 5,790. Language: English. Published: March 31, 2017. Categories: Fiction » Horror » General
Tina finds herself captive in the backseat of her granny's car. She watches as the last of her granny's sanity ebbs away. Meanwhile, the car speeds and careens wildly down the streets of Tina's hometown with Tina trapped in the backseat and her granny paralyzed behind the wheel. Can Tina help her granny break free from her spiral in time to save both their lives? The decision is in her hands. 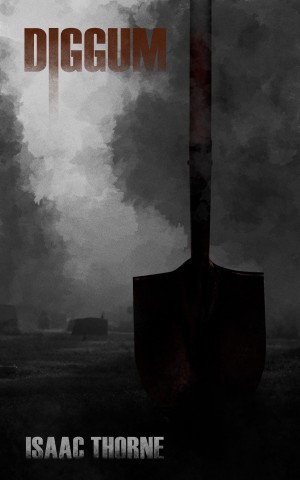 Diggum by Isaac Thorne
Price: $0.99 USD. Words: 9,650. Language: English. Published: October 1, 2016. Categories: Fiction » Horror » General
Meet Diggum, the local graveyard caretaker, who lives in a small cottage at the edge of the cemetery. Diggum has spent most of his life angry with God, whom he blames for the devastating house fire that cost Diggum his family. But Diggum has a secret. It is a secret he hopes to carry to his own grave. It is a secret that he hopes will finally get him his ultimate revenge on God. 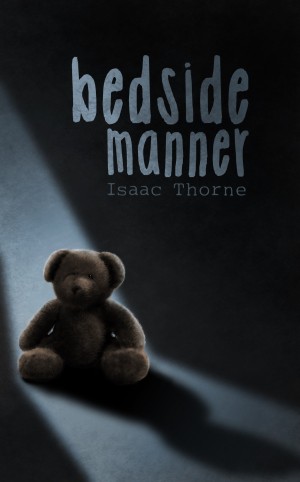 Bedside Manner by Isaac Thorne
Price: $0.99 USD. Words: 13,240. Language: English. Published: March 1, 2016. Categories: Fiction » Horror » Ghost
Throughout history ghosts have haunted the imaginations of young children. On a few occasions, they have reportedly compelled those children to perform unspeakable acts of horror against the living. BEDSIDE MANNER documents one child’s attempts to resist. 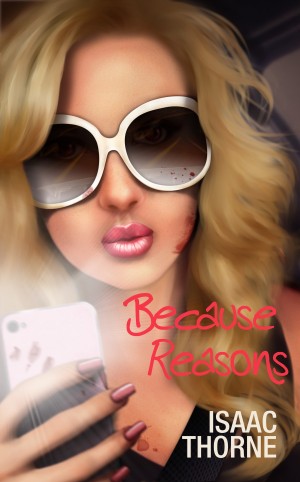 Because Reasons by Isaac Thorne
Price: $0.99 USD. Words: 6,720. Language: English. Published: November 30, 2015. Categories: Fiction » Horror » Crime
She's not bad. She's just bored. So one night Tiffany decides she's going to go out and have some real fun. Some blood-soaked fun. Because fun is powerful and power is legit. Because being bored is worse than being dead. Because she can. Because reasons. 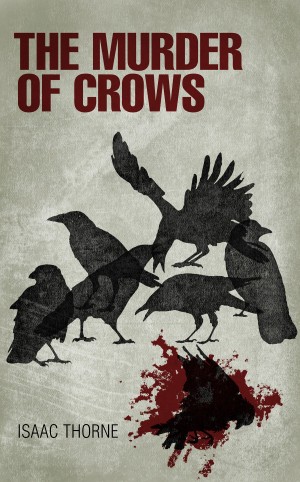 In a near future of zero tolerance, Big Brother is not entirely born of the government. He is also your local news, your social media friends and followers, your neighbors. It was only a matter of time before someone found a way to capitalize on it. A satire of modern media and popular culture, THE MURDER OF CROWS attempts to follow the trend of public shaming to what could be its ultimate end. 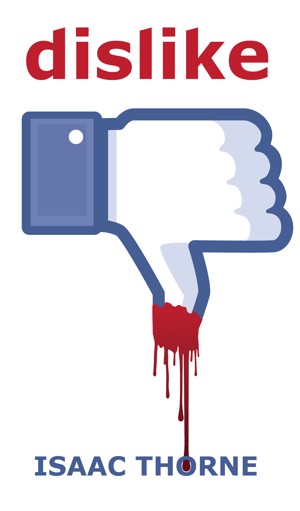 Dislike by Isaac Thorne
Price: $0.99 USD. Words: 3,490. Language: English. Published: April 6, 2014. Categories: Fiction » Horror » General, Fiction » Themes & motifs » Psychological
It’s difficult to judge a person’s tone based on what they post online. Two social network friends of William Dennison are about to find out for themselves how difficult it can be. After losing both his marriage and his job in a single day, William takes to a popular social networking site to vent. There it becomes clear to his friends that he is unraveling. Can they stop him before it's too late? 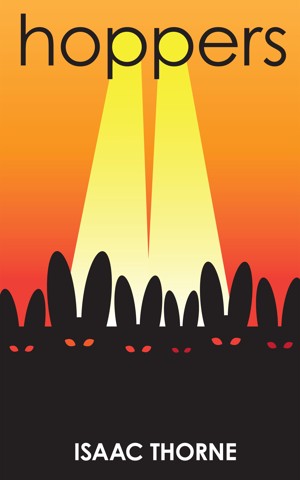 Hoppers by Isaac Thorne
Price: $0.99 USD. Words: 7,670. Language: English. Published: July 18, 2013. Categories: Fiction » Horror » Undead
Mike Bragg is a man you can trust. He'll fix your car up right. He might even drive it home himself, just to make sure it's running exactly the way he thinks it should before you get it back. But when he accidentally runs over a small brown rabbit on his way home from work one day, Mike chalks up the incident as just another insignificant rodent casualty. 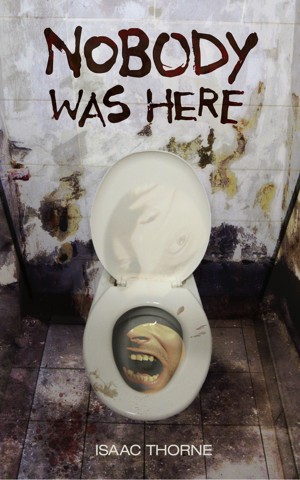 Nobody Was Here by Isaac Thorne
Price: $0.99 USD. Words: 6,470. Language: English. Published: May 27, 2013. Categories: Fiction » Horror » Weird fiction, Fiction » Horror » Crime
There are monsters of this world. They look like us. They behave like us. They even have dreams and ambitions like us. But they are not us. At least, we do not like to think so. Sometimes, as is the case with traveling family man Reed Reese, we are confronted by these monsters. Usually when we are most vulnerable. They might not even view it as a confrontation, but we do.