This interview has been viewed 298 times.

Published 2014-01-21.
Do you remember the first story you ever read, and the impact it had on you?
I remember my mother and I would read Lemony Snicket's "A Series of Unfortunate Events" and falling in love with the dark wit. By the time I started reading them, ten books had been released. Fortunately, the Penultimate Peril came out at the right time, which I acquired from a friends yard sale in a turn of fate, and then had to wait patiently for The End. Honestly, I was never much of a reader; I was slow and would get distracted easily. Once I finally began to love books I think it helped me focus, and now I can digest a book like a pro.
How do you approach cover design?
It all starts with the image. A strong photo depicting a central place, item, or mood means giving the prospective reader a taste of what they're in for. In the case of Faolan, I choose an image depicting a forest of dead trees with a white overcast winter sky. Not only does it depict the kind of natural emptiness that pervades the novel, it is also an actual visual scene in the story. Then I just organize the textual material in a way that complements the image.
What are your five favorite books, and why?
Good Omens by Terry Pratchett and Neil Gaiman — the book that made a reader out of me.

The Bartimaeus Trilogy by Jonathan Stroud— (actually three books, but hey) because of the raw genius within. They did for me in three books what Harry Potter did in seven. I call that efficiency.

The Night Circus by Erin Morgenstern— A dazzling ride that inspired a new side of me.

Neverwhere by Neil Gaiman— Filled me with utter joy. And Gaiman is my hero. Probably tied with The Graveyard Book.

Jane Eyre by Charlotte Brontë — The odd one out, but the fact that every line is a work of incredible poetic beauty is stunning.
What is your e-reading device of choice?
I am a die-hard Apple fan, and among my many Apple possessions is a new iPad Air. It's between that and the iPad mini for me, especially with the release of the mini with retina display.
Describe your desk
I have an L-shaped desk made of black glass. It holds my 13" Retina Macbook Pro, which sits atop a Twelvesouth Hi-Rise that is sometimes connected to the 21.5" iMac which is nestled in the elbow atop the desk. One part of the desk is overtaken by a large midi keyboard and synthesizer. There is also a Blue Yeti microphone and a coaster, which I use to rest my drink on. My printer sits on a filing cabinet that is adjacent to the desk and a shelf above holds some Dover miniature scores and some books on orchestration along with a few issues of Writer's Digest and GameInformer.
Where did you grow up, and how did this influence your writing?
I grew up in Las Vegas, NV, so I'm used to dry cold winters and blazing triple-digit summers with no snow but for the rare 1/2 inch every decade or so. The rain always brought floods, but that was the closest thing to a natural-disaster that I would ever experience. If it wasn't for the temperature variation one wouldn't be able to tell the summer from winter, since the trees were all evergreen or palms and everything was kept alive by artificial means. I think this made me want to create worlds that had more dimension than that.
What's the story behind your latest book?
Right now I'm working on a reworking of my first novel (which was never published). It is about a man who comes in contact with a little orphan boy. The man is an investigator looking into a serial murder case, while the boy, who is a supernatural genius, is driving him insane. It is a mystery and also a religious allegory.
What motivated you to become an indie author?
I'm an indie artist, and am really big on DIY. I figured if I could do cover design, interior design, and formatting myself, then why not? It also gives me free reign to do as I please. Much of the commercial novel industry is limiting authors to ideas that will "sell", and I get it, that's great. But when an author wants to push bounds and do things that may not be as successful just for the sake of creating raw art, then this form becomes the way to do that. Some books are a little difficult, and may not be the cup of tea for a large mass of people, but isn't that the nature of all art? I think it's important that indie authors publish their works in the same way I believe that indie film makers make their films. It's a cultural necessity.
What is the greatest joy of writing for you?
Discovery. I write start to finish, and I may have a skeletal plan in mind, but I also learn a lot about my characters' lives. I found so much depth the a pool of information that I created myself. It's like digging a hole a foot deep, and stepping in to discover it really goes to the center of the earth.
What are you working on next?
FAE is expanding, and the sequence will be something far grander than Faolan's journey alone could ever be. I'm very excited for that.

I'm also working on a piece that is not only a novel, but holds elements of musical scores within its pages. So that when the characters, who are musicians, play, the notation will be presented to the reader as well. This world of artists who are, also, magicians, will be the sequence to parallel FAE as my flagship.

Oh, and there may be a radio drama in the works.
Who are your favorite authors?
Neil Gaiman is, bar none, my biggest inspiration.
Smashwords Interviews are created by the profiled author or publisher. 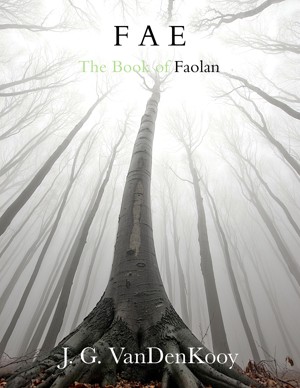 Fae: The Book of Faolan by J.G. VanDenKooy
Price: $2.99 USD. Words: 119,170. Language: English. Published: July 23, 2013. Categories: Fiction » Fantasy » Epic
For centuries, little children have been kidnapped by mischievous faeries. They take them away to the world on the other side. Sometimes, if they survive, the children come back to the human world, but never the same. The other world calls them, beckons them to return. In their dreams—and daresay waking hours—they go wandering back to the Faery Realm.