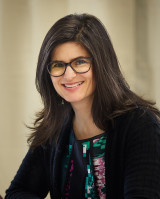 Published 2019-03-20.
What is your e-reading device of choice?
I appreciate the convenience of bringing lots of books with me on my Kindle. It's especially handy during a bus commute.
Where did you grow up, and how did this influence your writing?
I have lived my entire life on the West Coast of the US, which gives me a skewed perspective on the popularity of environmentally-friendly beliefs. Fun fact: I've been moving gradually north my entire life. I spent my childhood in San Diego, attended college in Los Angeles County and moved to the San Francisco Bay Area after graduation. In 1989, I remember thinking, "At this rate, I'll end up in Seattle." I've lived in Redmond, Washington (20 miles from Seattle) since 2014. The Pacific Northwest is beautiful, and it's great living in a place where my message about less wasteful manufacturing resonates with nearly everyone I meet. Yes, it rains frequently, but fortunately, I like rain.
When did you first start writing?
I've been writing professionally since 2001, but even when I was an engineer in the 1990s, I was always the one writing articles for publication in trade magazines and reports for government contracts. I gravitated toward writing, and an engineer that enjoys writing and is good at it is unusual. I needed to take advantage of my particular abilities and interests.
What's the story behind your latest book?
I’ve been fascinated by engineered materials ever since I took an introductory materials science course in college, but I didn’t always consider the environmental impact of all the amazing materials that engineers were inventing. In recent years, I’ve thought more about these issues and the responsibility of manufacturers to their employees, customers, and the communities in which they operate. The more I learned about companies embracing the triple bottom line—profit, people, planet—the more I became convinced that I should write a book focused on the materials aspect of sustainability. I chose to emphasize metals and plastics because these engineered materials are so prevalent in society and new technologies on the horizon can produce them in safer, less wasteful ways.
What do you hope readers will learn from your book?
I want readers to understand that the challenges around waste are complex, but many smart business leaders are developing creative solutions and progress is being made. We shouldn’t be complacent, but neither should we be discouraged. I encourage readers to set aside existing biases about a specific corporation and learn all they can about its current practices and policies before deciding whether to support or boycott the company’s products. The answers may still be unclear, but with knowledge comes power.
What motivated you to become an indie author?
Early in the process of researching Material Value, I discovered the Nonfiction Authors Association (NFAA), an online community with local chapters. The more I learned from authors who had gone through both traditional and independent publishing, the more I became convinced that indie was the way to go. I didn't have an existing platform, I liked the idea of keeping creative control, and I was willing to learn the ropes to create my own publishing company. Since I was already a business owner and able to fund the upfront costs with income from my writing business, that helped. The process has definitely been a huge amount of work, but I believe that it's worth it.
What is the greatest joy of writing for you?
I get a thrill out of learning new things and explaining them to readers. I love it when I've done enough research and know my topic well enough that the words just flow. It's also satisfying to return to a piece where I've gotten stuck and suddenly realize how to reorganize it, adding and deleting what's needed to be able to read through it and say, "That's good!"
What do your fans mean to you?
My fans are people who read the words "more sustainable, less wasteful manufacturing" and think, "Yes, we need that!" They share my belief that it is important to understand how things work and what society is doing today as the first step toward making the world better tomorrow. They help me remember that the messages in my book resonate with people and need to be shared, and their enthusiasm makes me smile.
What are you working on next?
I do have another book in mind. It also addresses materials and sustainability but looks at textiles and clothing. I’m collecting a list of topics to cover, including less-toxic ways to dye fabrics and why people who can afford new clothing every season should consider thrift and consignment stores.
I won’t be writing the next book yet, though. My first priority is to concentrate on marketing Material Value. Simply writing a book that people want to read isn’t enough. It’s an author’s responsibility to let potential readers know that the book exists.
When you're not writing, how do you spend your time?
Sports and music. I’m currently training for my first Olympic distance triathlon after completing six sprint distance events. I’ve been a musician since the age of seven and currently play flute and piccolo with the Woodinville Concert Band and Ah Tempo Flutes.
Smashwords Interviews are created by the profiled author or publisher. 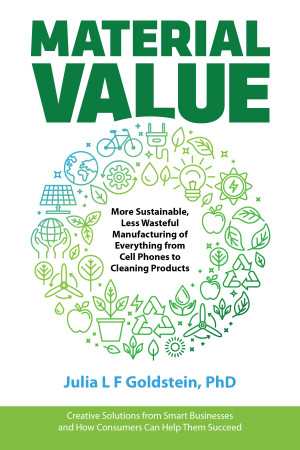 Material Value: More Sustainable, Less Wasteful Manufacturing of Everything from Cell Phones to Cleaning Products by Julia Goldstein
Price: $8.99 USD. Words: 79,100. Language: English. Published: April 22, 2019. Categories: Nonfiction » Engineering, trades, & technology » Manufacturing, Nonfiction » Business & Economics » Green business
Creative solutions from smart businesses. Are you concerned about plastic waste and its effect on public health and the environment? You're not alone. Read Material Value to learn about the challenges facing the manufacturing world and how to make choices that are less wasteful and less harmful to people and the environment.