Published 2013-08-28.
Where did you grow up, and how did this influence your writing?
I grew up in a small village in southern West Virginia. I was fortunate to have good teachers who insisted that their students learn the elements of English Composition. Every grade beginning at the seventh had essay assignments which were an important part of earning a passing grade. I learned to love writing and wrote letters to the editor of city newspaper near our village. When these were published it inspired me to begin writing short stories.
When did you first start writing?
I was either thirteen or fourteen.
What's the story behind your latest book?
I did a science project on social insects in High School; and became fascinated with the idea of the common mind these creatures seem to possess. I also found the fact that they determine the development of their colonies off-spring by hormones mixed with royal jelly and honey or honey dew. When soldiers are needed the diet is regulated so the larva develop into soldiers. If the need is workers then diet produces an abundance of worker. As a youngster, I dug up ant colonies and placed the living creatures into jars and fed and studied them.
These become the mysterious creatures known as Assaer in other books but in SILVIA... they become only creatures she sees in half awake moments that leave tools and messages. The messages and tools enable her to be an avenger of blood.
What motivated you to become an indie author?
I wished to tell the stories I first sketched out in High School and college. Having only published technical papers here-to-fore, I found that it is nearly impossible to get a traditional publisher to take a chance on an unknown author.
How has Smashwords contributed to your success?
Not yet successful; however Smashwords has given me a forum. I found it was not beyond my ability to qualify for the premium catalog.
What is the greatest joy of writing for you?
While writing I am away to other worlds. Writing allows me to draw on my life experiences and really live the adventures I imagined as a young teenager.
What are you working on next?
Last train to Boston which I hope to publish at Smashwords. I have rewritten it a number of times; but there is a preview available at my website: http://www.sylvanianempire.info
Who are your favorite authors?
Science-Fantasy: Eric Flint and David Drake
Mystery: John Sandford, Stuart Woods, J. D. Robb
What inspires you to get out of bed each day?
Adventure.
When you're not writing, how do you spend your time?
Out Doors, fishing, hiking. Every morning I meditate, read, and pray.
How do you discover the ebooks you read?
Browsing catalogs at Sony and Smashwords; looking for new authors and my favorites previously named.
What is your writing process?
I have a number of outlines, I read, re-read, develop plot and then write those little stories that develop my stories' characters.
Do you remember the first story you ever read, and the impact it had on you?
It may have not been the first but I remember "St. George for England". It awakened a sense of duty and gave me the vision of honor that I still possess. Honor and Duty seem to be lost concepts with our general population. If I have an audience it will be those who understand such things.
Smashwords Interviews are created by the profiled author or publisher. 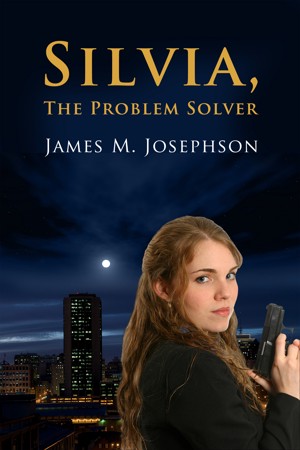 Silvia, The Problem Solver by James M. Josephson
Price: $2.99 USD. Words: 10,910. Language: English. Published: April 4, 2013. Categories: Fiction » Science fiction » General, Fiction » Mystery & detective » Women Sleuths
Silvia shocks the Law School class with her Valedictorian Speech. Rejecting a career before the Bar, she becomes an Avenger of Blood. By day a clerk in a law firm; but by night she hunts the human scum who the courts have released without real punishment. Deeply religious she is tormented by her chosen vocation; until strange alien visitors come to be her enablers. Adult Crime,SF,explicit sex.