Published 2015-09-13.
How do you approach cover design?
Designing a cover for Science and Sails was rather problematic. How do you represent Science? So I chose a question mark for the Science and the sailboat for the sailing.
What got you fired up about trying to save the Oceans?
I entered graduate school in 1970 just after Silent Spring by Rachael Carson was published in 1962 and just as the USA was legislating the US EPA and NOAA into being in 1972. The first pictures from space were exciting everyone. It was clear that unchecked industrial destruction of the estuaries was happening big time. I had to learn the tools to get into the fray about saving our oceans.
What are your five favorite books, and why?
Joseph Conrad's books because of the exciting sea based stories and Patrick O'Brien's series about Captain Aubrey and Stephen Maturin (The surgeon, spy, naturalist) in the 18th century Navy using sailing warships. O'briens books were extremely well researched and every critter Stephen picked up was verified in the British Natural History museum. I have always liked historical and adventure novels.
What do you read for pleasure?
Yes as mentioned in the last question I read alot. I enjoy the modern adventure novels too. Plus I still read a lot of science papers.
What is your e-reading device of choice?
I have a Kindle reader.
What book marketing techniques have been most effective for you?
Word of mouth or electronic versions of such. I am new to the publishing business for my own work.
Describe your desk
My Desk at uni is a cubical in a common area where I keep my laptop and a few science books. My desk at home is a table covered with computer bits, dictionary, a printer, a telephone, diary, jar of pens/pencils, and my brand new Windows Tablet.
Where did you grow up, and how did this influence your writing?
I grew up in inner city Detroit where there was much poverty and drug related violence. I had to become independent and strive for the good things. My parents sent me to the Catholic schools because the nuns taught us the basics and we were sheltered from the violence at the public schools. My father worked his life at Chrysler Corp. Luckily I got scholarships to university and my education grew in leaps and bounds until I landed in Woods Hole and began my PhD.
What's the story behind your latest book?
The book relates many of the experiences I had during my 40 year career as an oceanographer, being a woman in a predominantly male profession. And it relates the sailing adventures we had going from one marine science job to the next. Thus I hope it will be an inspiration to young students today and to all those adventure lovers that love sea stories.
How has Smashwords contributed to your success?
I had no idea how to self publish and the free guides offered by Smashwords opened a whole new world to me.
When did you first start writing?
I started writing science articles in 1970 and published over 100 during my 40 year career. I had worked in many exotic places and began writing down significant events and people's names in about 1980 before I forgot them. These notes provided the basis for Science and Sails. I got an MA in Writing from JCU in 2015 with the aim of learning how to tell the science stories for the general public to understand and appreciate.
What is the greatest joy of writing for you?
Telling the stories for others to read.
What do your fans mean to you?
If I have "fans" then I am grateful. I know my current grad student calls me a "Rock Star".
What inspires you to get out of bed each day?
All the things I have to do in a day.
When you're not writing, how do you spend your time?
I used to swim 1500 m twice a week until 2007 when they changed the chlorination scheme in the pools. The salt pools don't kill fungus and so my left eardrum is badly damaged. So I have switched to the bicycle and do 18 km twice a week to keep fit and I still do a 40 minute routine of ballet exercises.

But outside of excercise, I garden, I cook, I travel. (I have never met an organic chemist that was not a gourmet cook).
How do you discover the ebooks you read?
Word of mouth again
Do you remember the first story you ever wrote?
Yes, It was called "The Little Green Bucket" and I included it in the book Science and Sails.
What is your writing process?
My book is non-fiction. I started writing significant events logs twenty years ago, before I forgot names and places. These logs were invaluable in writing the memoir. That is the same process for historical novels. Compile the accurate background.
Do you remember the first story you ever read, and the impact it had on you?
I did not start to read novels until I was in university, not realizing that some novels teach one much about life. The first one I picked up was "The Glass Bead Game" by Herman Hesse. It was so amazing that I read most of his novels and went from there into many other classics.
What are you working on next?
I don't yet have another book in mind but I continue to write scientific papers in science journals.
Smashwords Interviews are created by the profiled author or publisher. 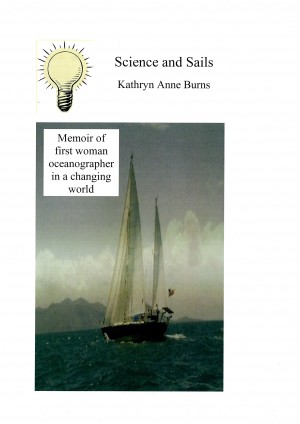 Science and Sails (Memoir of first female oceanographer in a changing world) by Kathryn Anne Burns
Price: $3.99 USD. Words: 92,630. Language: English. Published: July 30, 2015. Categories: Nonfiction » Science & Nature » Ocean life
Memoir by Kathryn Anne Burns charts the career of first woman graduate from the most prestigious oceanographic institute in the world, Woods Hole Oceanographic Institution and Massachusetts Institute of Technology Joint Program. It's the struggle and achievements of a young scientist who discovers a new test that will revolutionize efforts at monitoring toxins in the Oceans and her sailing life.