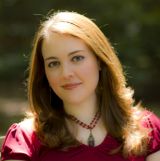 Published 2019-02-13.
What do you read for pleasure?
Always, always romance. I love contemporary, romantic suspense, steampunk, and the occasional paranormal romance tale.
What is your e-reading device of choice?
Predominantly, I read on my Kindle Paperwhite, but I have also been known to read on my phone while stuck in line waiting for stuff.
When did you first start writing?
I first started writing when I was twelve. I was a lonely, nerdy kid who didn't fit in, and I had just met the girl who would become my best friend. Honestly, looking back, I have no idea WHY we decided writing a book was a good idea, but after our first marathon phone conversation, that's what we were doing--writing a book about us as sisters at a summer camp. She ended up bailing on the book (though not on me!), but by then the writing bug had infected me but good. I've never stopped.
What motivated you to become an indie author?
It started back in the early days of self publishing. I had a few friends who were pioneers and had made a name for themselves through self publishing. I decided I would publish some novellas to begin building an audience for the series I wanted to pitch to New York. In the end, New York and I weren't a good fit, but I discovered I LOVE being an author/publisher and having all the control.
What do your fans mean to you?
Well obviously everything. If not for my fans, I couldn't do this for a living. But beyond the monetary aspects, my fans are some of my greatest supporters emotionally. If I'm having a crap day, all I have to do is open my inbox and I've got an email from somebody or a message on FB from someone else who found pleasure or solace in one of my books and just had to tell me what that meant to them. There's nothing greater than hearing those stories from readers and knowing that I've made a little difference in their lives.
What are you working on next?
I'm wrapping up the fourth and final book in my Misfit Inn quartet, BRING IT ON HOME, which is Maggie's story. It's the end of The Misfit Inn, but not at all the end of Eden's Ridge. There will be at least two other miniseries within that universe.
Who are your favorite authors?
That's like asking me to pick a favorite child...But okay, in no particular order: Nora Roberts, Miranda Liasson, Jill Shalvis, Tawna Fenske, Pippa Grant, Donna Kauffman, Elizabeth Dyer, and Erin Nicholas
When you're not writing, how do you spend your time?
I have a full-time day job, a husband, a teenager, and two active dogs, so the rest of my time is spent wrangling all of that!
What's the story behind your latest book?
My latest book is actually an expansion of a novella I wrote last year. BABY, IT'S COLD OUTSIDE wasn't on my production schedule at all. And then it popped up and I thought I could make it one of the novelettes in my Meet Cute Romance series, but Ivy and Harrison insisted they were more. So I expanded it into a novella and that's what got published. It was fun and flirty but...it never felt quite finished. There was more to their story. So I've been going back and expanding it into the short novel it really wanted to be. It will be used to kick off a new contemporary romance trilogy set in Eden's Ridge.
What is the greatest joy of writing for you?
I get to make up stuff for a living. How awesome is that? The world is often a terrible, dark place. I get the glorious job of proving that that isn't the ONLY thing the world is. I get to put out little beacons of light and hope, escape pods for readers to get an infusion of positive. I can't think of a better job than that. Except maybe cuddling puppies for a living.
Smashwords Interviews are created by the profiled author or publisher. 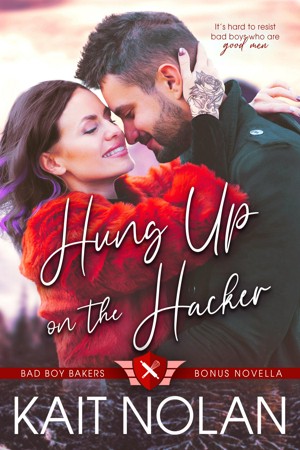 Hung Up on the Hacker by Kait Nolan
Series: Bad Boy Bakers. Pre-release—available October 7, 2022. Price: $2.99 USD. Words: 32,030. Language: English. Categories: Fiction » Romance » Contemporary, Fiction » Romance » Military
Feeling guilty about his clandestine involvement with Hadley, Cash puts their relationship on hold and hauls himself to Tennessee to square things with her brother. Turns out Hadley has the same idea. And she's got a surprise he didn't see coming. Now they've both got to find a way to break the news their connection as family just got a whole lot more permanent. 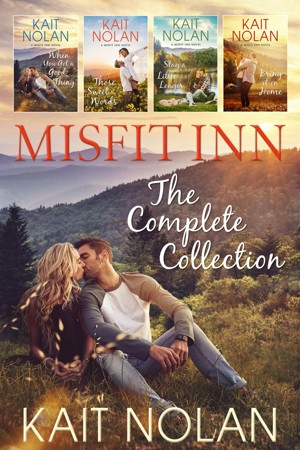 Misfit Inn: The Complete Collection by Kait Nolan
Price: $9.99 USD. Words: 251,870. Language: English. Published: June 28, 2022. Categories: Fiction » Romance » Contemporary, Fiction » Romance » Collections & Anthologies
A collection of 4 full-length small-town romance novels about a quartet of sisters who find their way back to being family and fall in love along the way. Includes WHEN YOU GOT A GOOD THING (second chance), THOSE SWEET WORDS (fake engagement), STAY A LITTLE LONGER (grumpy v. sunshine/opposites attract), and BRING IT ON HOME (friends to lovers). 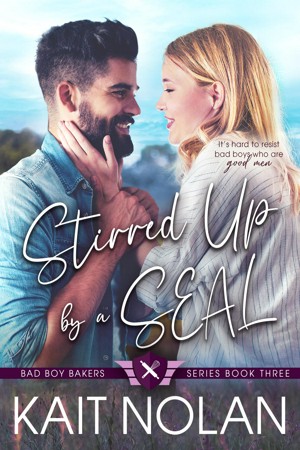 Stirred Up by a SEAL by Kait Nolan
Series: Bad Boy Bakers. Price: $4.99 USD. Words: 72,800. Language: English. Published: August 5, 2022. Categories: Fiction » Romance » Contemporary, Fiction » Romance » Military
All Rachel wants is temporary, and that's the one thing Jonah can give her. But when the trouble that's stalked his business from the start lands her in its crosshairs--and the hospital--he can't deny that there's nothing short-term about his feelings. Determined to protect her at all costs, he enters into a dangerous race to neutralize the threat before it torpedos everything he holds dear. 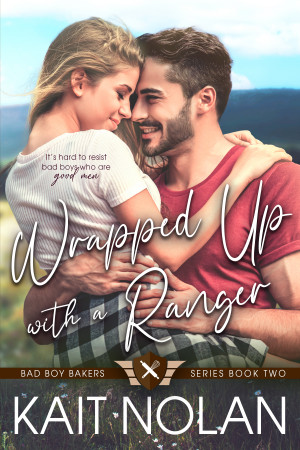 Wrapped up with a Ranger by Kait Nolan
Series: Bad Boy Bakers. Price: $4.99 USD. Words: 69,120. Language: English. Published: June 3, 2022. Categories: Fiction » Romance » Contemporary, Fiction » Romance » Military
When Cayla's ex is released from prison, Holt intervenes with an outrageous lie. The only way to fix it is to make his lie the truth. As they struggle to convince everyone that their marriage of protection is real, these two reluctant hearts fall deeper, until the lines between the fiction and the dream begin to blur, and they have to risk it all to protect the family they didn't know they wanted. 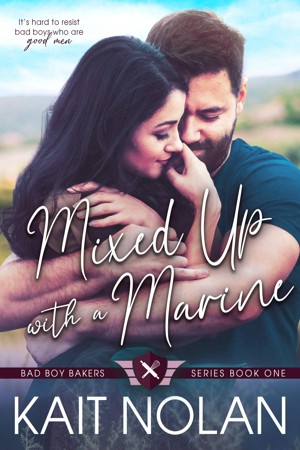 Mixed up with a Marine by Kait Nolan
Series: Bad Boy Bakers. Price: $4.99 USD. Words: 60,910. Language: English. Published: April 8, 2022. Categories: Fiction » Romance » Contemporary, Fiction » Romance » Military
Can a Marine turned baker and a jaded contractor find their way to a second chance? As they’re forced into proximity on the renovation, truths come to light, and Brax and Mia get a second chance. But when past secrets become present danger, Brax puts everything on the line to protect the woman who’s always held his heart. 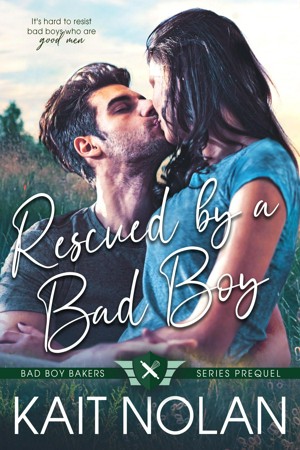 Just one more day until Mia turns eighteen—a legal adult. Brax doesn't trust her foster father and wants her out of that house. Is proposing a marriage of convenience to your best friend a little drastic? Maybe so. But what Brax feels is so far beyond friendship. Is it possible Mia feels it, too? 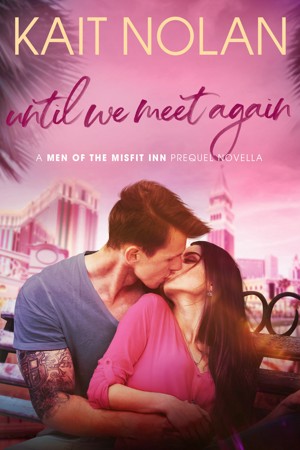 Until We Meet Again by Kait Nolan
Series: Men of the Misfit Inn, Prequel to Book 4. Price: $2.99 USD. Words: 28,000. Language: English. Published: November 5, 2021. Categories: Fiction » Romance » Contemporary, Fiction » Romance » New adult
Griff knows he's not the guy for Sam, but he can't resist saying yes to being her fake date for a wedding for the chance to get to know this grown-up version of the girl who once starred in all his dreams. Turns out, there's not a lot of faking it involved. Between the single bed and the endless couples activities, new feelings flare from the old, until they both fall under the spell of Sin City. 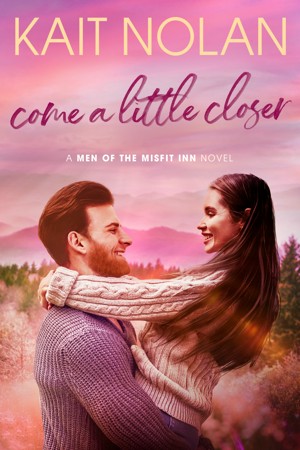 When Sam's best friend goes missing from a joint bachelor/ette party, no one takes her concerns seriously. Except the ex she's forced to pair up with for bridal party bonding. She starts a search herself--and ends up with an unwanted bodyguard whose very presence reminds her of a hot Vegas night she’s tried hard to forget. 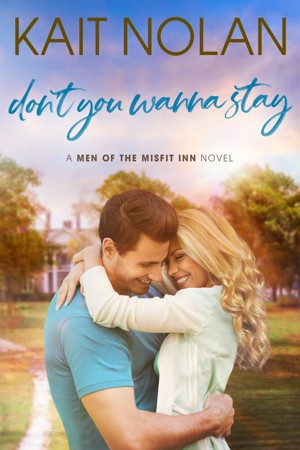 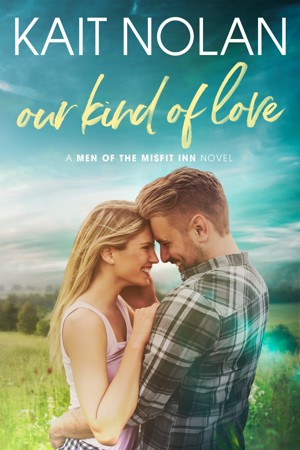 Our Kind of Love by Kait Nolan
Series: Men of the Misfit Inn, 2. Price: $4.99 USD. Words: 61,390. Language: English. Published: June 4, 2021. Categories: Fiction » Romance » Contemporary, Fiction » Romance » General
Kyle is desperate to convince Abbey that a fake engagement is the best way to get the media off her back—and his. And it just might give him a chance to fix what he destroyed. Even as these two frenemies remember all the reasons they wanted to be lovers, another blast from Kyle’s past returns, threatening to expose the secret he’s spent his entire career hiding.
View their profile to see all of their books