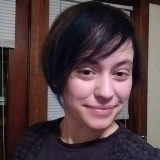 Published 2016-06-27.
What do you read for pleasure?
Sherlock Holmes books is the obvious answer, but I love alternative histories and genre crossovers. I'm currently reading the Anno Dracula series by Kim Newman for example, where the premise is that the events in Bram Stoker's Dracula really happened.. except that they failed. It's full of delightful little historical and literary references. The steampunk Burton and Swinburne series by Mark Hodder is another good one, or for a little more historical history I go to the 1632 series by Eric Flint. In fact, even when reading Sherlock Holmes, my favorite stories (outside the Canon) tend to be the ones where he meets a historical or literary figure, or is thrown out of his element into a sci-fi or supernatural setting.
What is your e-reading device of choice?
My husband and I shared an old-school 1st gen. Kindle for a long time, but then I started putting e-reading apps on my phone, and now I mostly use that. It gets the job done.
Describe your desk
Ha. It's dark brown, a self-assembly model from Target. Currently, it holds the laptop, upon which I am typing the answer to this question, my printer, which is old and bulky, a stack of assorted cds left there because... I'm honestly not sure why they're there and not somewhere else. There are three coffee mugs and a tin can my son decorated for me, all holding pencils, pens, markers, and one has an old lighter in it. A collection of Pablo Neruda poetry sits to the side, two coasters, a bracelet, a glass of something alcoholic (not on either of the coasters), headphones, and a Raphael ninja turtle, left abandoned by his brothers in the latest battle against Shredder.
When did you first start writing?
I've been writing for ages, just little stories all over the place, but my series The Adventures of Watts and Sherlock started in 2010. It started as just a bunch of short stories written for fun and catharsis more than anything else, and then after about 20 or so, it occurred to me that I had enough material for a book. Book 1 is the first nine stories. Book 2 will be the next ten.
What motivated you to become an indie author?
Impatience.
No, honestly, I had reached a point with my stories that waiting for a publisher to accept my queries just wasn't an option. I needed to get this out into the world, or it was never going to happen. Maybe someday I'll try submitting the series to a big publisher and see what happens, but for now I'm just glad that it's out there and available to people who will enjoy it.
What is the greatest joy of writing for you?
The escapism is exquisite. I love getting to know my characters, these brilliant, wonderfully interesting people I've been talking to for over half a decade. For smaller projects, it's delightful to step into a world for a moment, to grasp the essentials and hint at so much more, and to share this image of reality with others.
What are you working on next?
The Adventures of Watts and Sherlock, Book Two! It'll be called Of Jackals and Crusaders, and will touch a little more on the gangs of the City, and the relationship developing between Sherlock and Watts. There'll also be more of the Irregulars, which is all sorts of fun.They're a great bunch of kids I'm going to have fun working into future books.
Who are your favorite authors?
Oh, hell.
Well, Sir Arthur Conan Doyle is an obvious answer. In no particular order: H.G. Wells, H.P. Lovecraft, Edgar Rice Burroughs. Laurie R. King, Nicholas Meyers, Anne McCafferey, Charles DeLint, Neil Gaiman (I tend to like his 'kids' stuff better than his adult, with the exception of Neverwhere), Robert Howard (Solomon Kane!), Andre Norton, J.R.R. Tolkien, and so many others who have woven spectacular worlds around their readers.
When you're not writing, how do you spend your time?
Reading, making cable-controlled puppets, dabbling in perfumery, sewing cosplay accessories. I watch tv sometimes, listen to Welcome to Night Vale occasionally, audiobooks. Whatever strikes my fancy, really. This is all presuming I have the day off work and my son is either in school or asleep.
What's the story behind your latest book?
The Adventures of Watts and Sherlock started as a series of short stories I worked on for years, just writing for the sake of writing. I had this idea in my head of a person who found such solace and inspiration in the Sherlock Holmes stories that he wanted desperately to become Holmes. I'd just finished reading William Gibson's Neuromancer, so the idea of a cyberpunk setting was fresh in my mind. It's not really cyberpunk, though. It's not 'punk' enough. The focus of the stories is really on the relationship between the characters. What started as a fun exercise in re-imagining these classic mysteries morphed into an examination of what drives people to do the things they do. I'm fascinated by my characters, and I hope the reader sees that, and is just as fascinated as I am.
Smashwords Interviews are created by the profiled author or publisher. 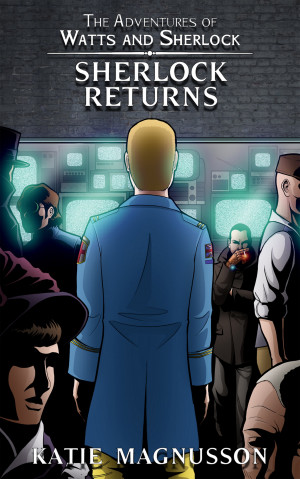 Sherlock Returns by Katie Magnusson
Series: The Adventures of Watts and Sherlock. Price: $3.99 USD. Words: 66,610. Language: English. Published: February 12, 2018. Categories: Fiction » Mystery & detective » General, Fiction » Science fiction » Cyberpunk
Dr. James Watts is doing the best he can to move on after Sherlock's death, and Sherlock is the last person he expects to see at his door. Coming back to 122 Break Street is the best decision Sherlock's ever made, but with his fame soaring and new enemies eager to see him destroyed, will he be able to face his most important challenge - fixing the friendship he fractured when he left Watts behind? 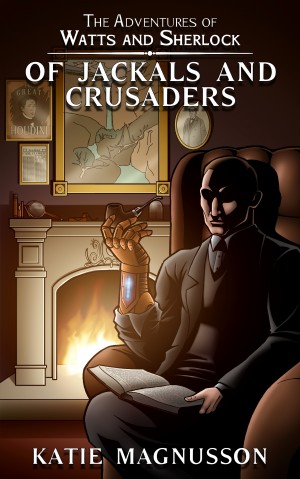 Of Jackals and Crusaders by Katie Magnusson
Series: The Adventures of Watts and Sherlock. Price: $3.99 USD. Words: 75,150. Language: English. Published: December 18, 2016. Categories: Fiction » Mystery & detective » General, Fiction » Science fiction » Adventure
The occasional assassination attempt is hardly a concern for the City's most popular detective. From solving murders to stopping gang wars, there's plenty to keep the man called Sherlock, and his companion Dr. Watts, busy. A new criminal empire is being built behind the shadows of the City's underworld, and the person at its head will stop at nothing to see Sherlock destroyed, from the inside out. 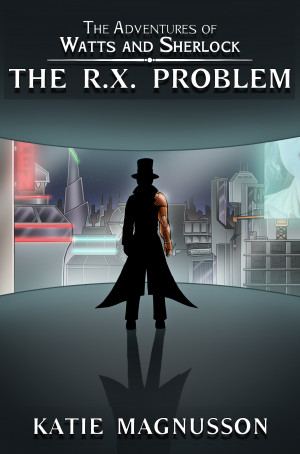 The R.X. Problem by Katie Magnusson
Series: The Adventures of Watts and Sherlock. Price: $1.99 USD. Words: 70,310. Language: English. Published: April 14, 2016. Categories: Fiction » Mystery & detective » General, Fiction » Science fiction » Cyberpunk
After an injury leaves him with a cybernetic leg and no job, Dr. James Watts becomes roommates with a detective named Sherlock, who is trying to emulate his literary namesake, to a disturbing degree. Watts is soon whisked along on Sherlock's cases, from solving murders to exposing immoral Corporations. He may or may not be crazy, but one thing is certain; life with Sherlock will never be boring.