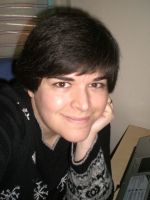 Published 2013-09-13.
When did you first start writing?
The first piece I can remember writing was when I was eight years old. It was an essay about the importance of saving the whales. I shared it with my family and they seemed quite impressed that I was so aware of the situation at that age.

I always wrote stories, though. I can't honestly remember the first one, but I remember entertaining myself with stories I would write in school when I'd finished my assignments in class and didn't feel like drawing to pass the time. They were epic stories, covering all the things I imagined and/or playacted when playing outside (I was a kid, after all).

Looking back, it was a fairly foregone conclusion that I was going to be a writer. My head was always in the clouds and my pen was always on paper, crafting stories to entertain myself with later on.
What motivated you to become an indie author?
When my first publisher, a small start-up press in London, went belly-up a couple of months after releasing my first novel, I took it upon myself to reissue Ask Me if I'm Happy. Other publishers either weren't very interested, or had terms I couldn't get on with in their contracts, so I opted to do it myself.
What is the greatest joy of writing for you?
Being able to share the stories taking center stage in my head all the time. I can lose myself completely for hours on end after disappearing into the world of my imagination, and knowing that other people enjoy reading the end result is satisfying, indeed.
What do your fans mean to you?
They mean the world to me. I love hearing from them; knowing they are engaged by the characters and the twists and turns in those fictional lives is what convinces me to keep writing even when it sometimes feels like I'm just another voice shouting out into the void. I know that's not the case every time one of them cares to leave a comment on my site, or a review somewhere out there for others to see.
What are you working on next?
I have several possible projects vying for my attention right now, including:

A prequel novella for Ask Me if I'm Happy (focusing on Davide and Letizia).

A sequel to Ask Me if I'm Happy.

A spinoff from that sequel to 27 Stages, featuring a female cyclist.

A novella based very loosely on how my husband and I met, set in North Carolina.

A short story/novella about a woman dealing with the marriage of her two best friends.

There are a few other stories I'd like to get to work on, but I think juggling these is more than enough work right now.
Who are your favorite authors?
Stephen King, John Irving, Richard Adams, Adriana Trigiani, Jennifer Weiner, and Neil Gaiman are currently at the top of my list, but it changes all the time.
What inspires you to get out of bed each day?
My cat won't leave me alone until I do, so I suppose she's my inspiration in that regard. After that, the thought of a cup of milky tea and some biscuits gets me going.
When you're not writing, how do you spend your time?
Surfing the 'net, working on my website, designing my book covers, taking photos, and most of all, READING.
How do you discover the ebooks you read?
Recommendations by friends, freebies, word of mouth on the internet -- and sometimes I just manage to stumble across them. I'm honestly not sure how some of them came about, but they're on my ereader!
Do you remember the first story you ever wrote?
An essay on the importance of saving the whales. The first fictional piece I recall writing was an effort to remember the storyline I'd created when playing with my Star Wars action figures when I was about eight or nine years old.
Do you remember the first story you ever read, and the impact it had on you?
There were too many to recall, honestly. The first story I can recall reading and thinking "I must do this myself! I need to write like this!" was Watership Down by Richard Adams. It filled my head with so much detail I could *see* every scene as though I were there - in far greater detail than the film had given - and that was an eye-opening experience for me. I knew I *had* to write, and the stories I wrote took on a deeper meaning to me as a result of that.

I still read that book at least once a year, and I'm still as captivated by it now as I was when I was nine.
How do you approach cover design?
I usually begin with a vague notion of what I want. It's more of a feeling than a concrete image, sometimes. Sometimes I stumble across something while playing with my image editor, and it leads to the perfect (for me) image for a book.

Truth be told, I frequently will design a book cover long before completing the book itself, because that motivates me to write the story to accompany it.
What do you read for pleasure?
Everything. Sometimes more than once. I rarely throw or give books away, because I'm a re-reader.

I don't focus on any one genre, but some interest me less than others. I don't read a lot of horror, but I love Stephen King and Joe Hill, so I can't say "I never read horror." That said, I do lean toward literary works and women's fiction, but I also read biographies and (very) occasionally I'll pick up something "chick-lit" to pass the time.

I think this is why my novels are sometimes hard to classify as one genre or another, since my influences are all over the map.
What is your e-reading device of choice?
I have a Kindle Touch. My mother got it for me last year for my birthday because she loved the one my sister gave her for Christmas. Until I got one, I didn't think I'd want one. Now I read most books on it - and it's very useful for proofing my own work, too.
Describe your desk
Chaos. I really need to get more organized, as I think that'd help me to be more productive.
Where did you grow up, and how did this influence your writing?
Eastern Kentucky, Southwest Virginia and Florida. I think it influenced my writing by exposing me to a wide variety of people of all walks of life, all levels of society. Being the stranger in school/town made me work to be a good observer of human nature and behavior in order to, if not "fit in" to be less noticeable in a crowd.
Smashwords Interviews are created by the profiled author or publisher. 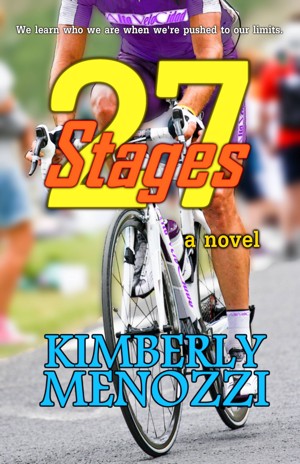 27 Stages by Kimberly Menozzi
Price: $3.99 USD. Words: 148,450. Language: English. Published: April 27, 2013. Categories: Fiction » Sports, Fiction » Romance » Contemporary
Cyclist Federico Renard assists photographer Abigail White after she is caught up in a crash at a stage finish of the Tour d'Europa. When chance keeps bringing them together, a tentative romantic relationship begins to grow. If they give in, the cost could be too great – his place on the team and her marriage are both at risk – but it's difficult to hold back for the sake of coming out ahead. 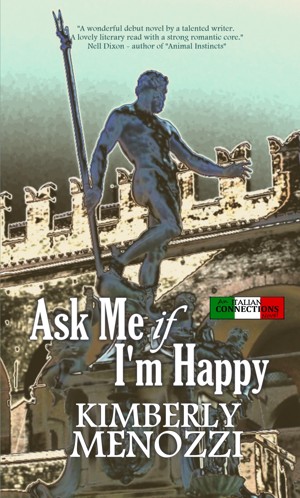 Ask Me if I'm Happy (Italian Connections series) by Kimberly Menozzi
Price: $3.99 USD. Words: 114,220. Language: English. Published: May 4, 2011. Categories: Fiction » Women's fiction » General, Fiction » Romance » Contemporary
Emily Miller and Davide Magnani meet by chance in Bologna, Italy, thanks to a transportation strike. After passing a day together, they realize there's more than a simple friendship between them. A fragile relationship quickly blossoms before they part ways without expecting to meet again. Reunited one year later, however, each has their own secret to keep - and one could easily tear them apart. 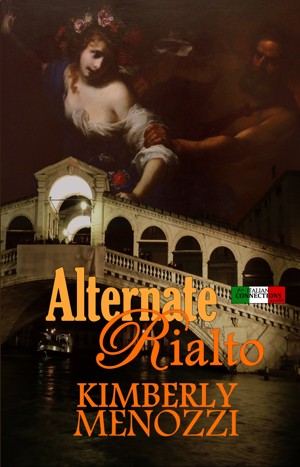 Alternate Rialto (Italian Connections series) by Kimberly Menozzi
Price: $0.99 USD. Words: 38,000. Language: English. Published: April 27, 2011. Categories: Fiction » Women's fiction » General, Fiction » Romance » Contemporary
Emily Miller comes to Italy to get over a breakup, but watching her beautiful best friend Jenn draw all the attention of the local men isn't helping. When at last a handsome Venetian named Jacopo entices Emily into a once-in-a-lifetime fling, she grabs the chance with both hands. In time it seems his intentions are anything but short-term, but can she really trust what seems too good to be true?