Published 2020-04-02.
What motivated you to become an indie author?
I am A Baby Boomer from the 50s, and had vast experience in all forms of writing in my roles within industry. I wanted to take these skills along with my energetic imagination to produce the most innovative fiction novel I could.

Essentially I wanted to break free from day-to-day limitations of writing tender documents and corporate policies and employ both sides of the brain as a team, that comes from a combination of my story telling capabilities and writing skills

My extensive travel and research landed me with the concept for The Vytautus Pursuit. In melding the intense and varied history of Lithuania and its forefathers with daring concepts and linkages throughout, I hope this first offering will provide readers of this genre with a new avenue of escape.
In making this move to indie authorship, I hope the reader will be spellbound from Page 1 and once finished will be impatient in awaiting the next in the series.
What is the greatest joy of writing for you?
The greatest joy is quite simple. The joy of creation is very special. Whether it be a piece of art, an interpretation of a classical ballet in translation into dance, laying down a new music album as a group or solo performer, or as a writer, be it a novel, a non-fiction work, poetry or play.

I sure as heck cant draw, sing or dance, so my writing gives me the joy of delivering something thats creative and original to the world.
When you're not writing, how do you spend your time?
Whilst writing takes up a lot of my time, I do love my daily walks, reading and participating in a number of classes within the University of the Third Age (U3A) framework in my home town.

Three of these classes relate closely to my writing - ePublishing, Listen to your Story and Creative Writing, the last of which I run myself as class facilitator.

I also love to travel, where I get some of my inspirations. My brief time in Lithuania and the legends associated with the Trakai Castles gave birth to Jack Carpenter's first adventure.
What's the story behind your latest book?
Jack Carpenter is an extraordinary young man. Extraordinary for a number of reasons.
His childhood and youth were peppered with moves from country to country. Even though he is Australian, his father Joseph's diplomatic portfolio saw his family jump around from Africa to England and all points in between, the disruptive influence of which was indelibly stamped on his formative years.
So much so that Jack took this millstone into his early adulthood in his role as SASR Captain in Afghanistan.
Disillusioned with his lot fighting the Taliban, the death and injury to many of his mates and the hyprocacy behind the politics of the war, Jack decides, all of a sudden, one day to venture outside his comfort zone.
In search of his past and being rudely awakened at what would appear to be his future, Jack completes a dizzying chase. A chase that takes him from Ancient Rome, through medieval eastern Europe, into present day Lithuania where the lives of those held close rely on him, his best mate and his new love to retrieve coronation jewels lost for five hundred years.
The vexed questions are, will Jack succeed, will his finest comrade in Afghanistan come thorugh, and will his newfound girlfriend shrouded in mystery, turn out to be friend or foe?
How does that great idea for a story come about?
It can be as simple as observing things around you on a day-to-day basis. It can stem from simple everyday activities, for example in my writing class I set an exercise:
"I woke up this morning and to my surprise...." Participants were asked to present a story of 800 words or less and some of the ideas we came up wtih were things novels are made of.
Other ideas can be propogated from much more detail such as eras of history, life stories of famous or not so well known people like families or friends.
In essence there are countless ideas for new stories, fiction or non-fiction
Do you remember the first story you ever wrote?
It was a poem and I had it published in my high school magazine in year 10. I was 15 at the time and had no idea that I would end up being a writer.

The story was about twins Rita and Rhonda who joined a circus and travelled the world. They were in love with travelling and until they did this had no idea of the many twists and turns that were out there. A learning ecperience for them and anyone that met Rita and Rhonda
What is your writing process?
The very first stage is probably the most nebulous and most difficult. You need a great idea to start with, and behind that idea is a great plot and behind the plot great characters (both heroes and villains).
Once I get all that down on paper, the research begins. As I love to write historical fiction, my locations and character research is paramount. Authenticity cannot be compromised so my research on the story, the plot, the locations and the characters is on-going, fluid, and tweaked as I go.

I will have a chapter outline for my story, with placeholders for character notes and location notes. With the story and the plot, once I get my chapter outlines sorted, I then right furiously as I go putting as much meat on the chapter bones as possible.

Once I get all this done, hopefully the start, middle and end of the book will gel and have the story nailed as one that people will want to read.

But, as with JC1, I will most likely write and rewrite many sections over and over until my characters arc, and portray themselves as interesting and exciting as possible in the context of the story.

Writing all done the editing begins and thats a whole different "story".
Who are your favorite authors?
Whilst I have a number of favourite authors, among them, Lee Child, Jennifer Egan and Phillipa Gregory, as you can see by this short list, my love of all works fiction be they literary, historical or action is manifold.

I love the way Phillipa Gregory presents the Tudors and the intricate history and interactions of the extended family and the influence they have had on medieval England.

I love the literary fiction that Jennifer Egan birngs. Bringing the most superb characters to life and making the reader feel as if they are "in their skin".

And of course, my love for action thrillers. Who doesnt want to relate to Jack Reacher? There are so many great heroes and heroines out their.

My first novel strives to introduce Jack Carpenter as an amalgam of all of these characters I have loved reading about and love reading about well into the future.
What do you read for pleasure?
All books give me pleasure, but mainly historical fiction from any era, action thrillers with great protagonists and literary fiction with innovative creativity
What are you working on next?
Once Jack Carpenter's first venture is unleashed on the world, I will be bringing to life Jack's next adventure as the leader of an elite team of unique "problem solvers".

His three "man" team is introduced at the conclusion of the Vytautas Pursuit so... No spoilers, youll need to read the first in the series to see where the ride on number two takes us.

But maybe Italy is in need of a dose of Jack? Oh! Did I just give something away?
Smashwords Interviews are created by the profiled author or publisher. 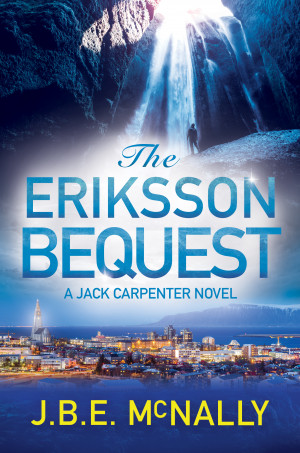 The Eriksson Bequest - A Jack Carpenter Novel by J.B.E. McNally
Price: $4.99 USD. Words: 191,300. Language: Australian English. Published: February 14, 2020. Categories: Fiction » Historical » Medieval, Fiction » Thriller & suspense » Crime thriller
So much water under the bridge since Jack and Agnetha's almost life-ending trials and tribulations in Vilnius just last year New lives, new careers, a honeymoon in the Maldives… until the Code Red. A thousand-year-old Viking fortune worth billions, Iceland under threat of destruction and a young family held to ransom With many twists and turns, Jack's second adventure will leave you breathles 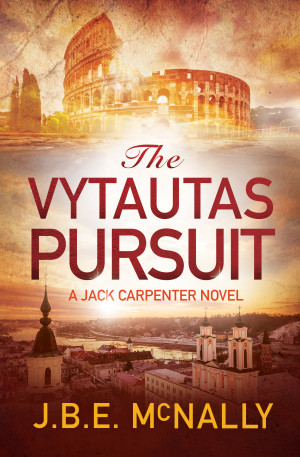 The Vytautas Pursuit - A Jack Carpenter Novel by J.B.E. McNally
Price: $4.99 USD. Words: 152,250. Language: English. Published: March 23, 2018. Categories: Fiction » Historical » Medieval, Fiction » Adventure » Action
An adrenaline fuelled chase that sees Jack Carpenter risk his life for his estranged mother, new love and best mate. From ancient Roman times, to the feuding Gediminus family in mediaeval Lithuania, to the hills of Taren Kowt and finally a game of cat and mouse through the streets of Vilnius to recover Vytautas' crown jewels lost for half a millennium. A deadly game with so much at stake.