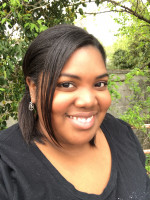 This interview has been viewed 281 times.

Published 2017-04-20.
How do you discover the ebooks you read?
The vast majority of my books are recommendations. I see a book on a blog or on YouTube that catches my eye. Amazon will recommend a book. A newsletter I'm subscribed to will recommend a book. Friends and siblings recommend books!
What is your e-reading device of choice?
I flip-flop between my iPad mini and my iPhone! I started reading on my phone one day because my iPad was downstairs for some reason and I didn't want to get out of bed. It's also easier to read books at work if I'm on my phone. People just assume I'm "one of those millennials" who's attached to my phone. If I'm on my iPad, people want to know what I'm doing.
Do you remember the first story you ever wrote?
The first story I remember turning into a "book" was called "The Thanksgiving Pig." I think I was nine. It was a full-color picture book with a nice happy ending: the pig gets served on a platter for Thanksgiving, complete with a shiny red apple in his mouth. Haha. My mom had it for years. She might still have it.
When did you first start writing?
I don't know! I'm one of those writers whose been writing forever, so probably elementary school sometime. I started writing novels at twelve though. They were lovely handwritten messes, barely long enough to be called novels. They're very entertaining. :)
What is your writing process?
It kind of varies from story to story, but it generally looks something like this: Get grabbed by a great idea. Trap the idea and sit on it for a long time and forget about it while it bakes. Think about it randomly one day - or it breaks out and runs amok in my brain - so I make notes in a shiny composition book to calm it down. Then I make a list of characters for quick reference in case I forget someone's last name or eye color. Below this, I jot down a brief synopsis that's subject to change. After that I outline the opening chapters (1 to 5 or whatever) - I'll finish that as I go. I usually get it wrapped up about halfway through the story. Now it's time to draft!
Do you remember the first story you ever read, and the impact it had on you?
I don't remember the first story I read, but there's a book called "Into the Land of the Unicorns" that had a pretty big impact on me. I still have it. I don't remember too much about it, but there was something so magical about the world and the story. Not only have I been obsessed with unicorns ever since, but the way I feel about the story is the way I feel about writing. It's beautiful and magical and I want to stay wrapped up in it forever.
What motivated you to become an indie author?
I kind of stumbled into it by accident. I had recently finished "No Rest for the Wicked" and was juggling my options. In the meantime, I started prepping my next project: brainstorming, outlining, all that fun stuff. I went to the bathroom one day, as people do, and I was suddenly struck by an idea to publish a book of poems! This was very exciting for some reason. I'm not a poet. I dabble. But it sounded like great fun. While I was doing research, I found some information about print on demand companies. Why not look into it, right? This led me to YouTube, of course, and in the black hole that is the YouTube sidebar, I found some videos by an indie author named Kristen Martin. After watching the four or five part series on her publishing journey, I decided that the indie path was right up my alley and dived full body into the indie author pool.
Smashwords Interviews are created by the profiled author or publisher.