Published 2018-11-20.
What inspires you to get out of bed each day?
If it isn't one of my three alarms, it's one of my two pet birds. They get up once daylight pierces the cover of their cages, and if I don't get up and uncover them, they won't stop shrieking until I do.
When you're not writing, how do you spend your time?
I work full time, so there's that. Leisure time I spend reading, and, in the warmer months, container gardening out on my balcony and walking my pet parrots around the neighborhood. Yes, I walk my birds! They love it, especially the beach, where they get to give the seagulls, ducks and crows a shout out. They always draw a crowd, and it seems everyone has a bird story.

Recently, I've taken up a new past time: stargazing. An iffy proposition much of the year here in the rainy Pacific Northwest. But when I need a break from writing on the computer, gazing into outer space is a great relief from cyber space.
How do you discover the ebooks you read?
Multiple ways -- by browsing retailer sites such as Smashwords, through social media (mostly I use Twitter). Word of mouth via other authors and online forums. Also free and discount email and newsletters, such as BookBub, Freebooksy, etc. Yes, I download freebies and discounted books, just like most readers of ebooks. It's a great way to discover new authors that I then go on to purchase more books from. I know I'm not the only one, so I follow the same practice in my marketing.
Do you remember the first story you ever wrote?
Hmm. I guess that depends on what you consider a "story." In school, I always did prefer writing assignments that were creative in nature, as opposed to essays and term papers. I recall having to come up with a haiku that was quite fun, I think precisely because it requires a specific structure. But as for something of my own initiative? No, I can't remember the first one.

However, I do know that from the earliest age, about six, I guess, I've always "daydreamed" the lives of fictional characters hanging around in my head.
What is your writing process?
Scattershot, and general to specific. A famous author (can't remember who -- maybe it was Stephen King?) said there are two kinds of writers: taker-outers and filler-inners. Basically, I'm a filler-inner.
How do you approach cover design?
I write a blend of romance with other genres, such as women's fiction, saga, comedy. That means a female readership. I like my covers to be pretty and I love it when readers think so, too!
What are your five favorite books, and why?
I've said this elsewhere. I have one book that's my "desert island" read -- meaning I'd want it with me if I were ever stranded on a desert island because I could read it over and over again and never get tired of it. That book is "Shining Through," written by Susan Isaacs at her peak in the 1980s. It's the story of a secretary who goes undercover in Nazi Germany in World War II, a working-class girl who does a heroic deed, finds love, and finally embraces her Jewish identity. It's a timeless, human story.

I've always loved it because Isaacs, at her best, can make you laugh and cry at the same time. It's a pop novel, but not trashy as some can be, and written with a simple conversational, eloquent style that's as wise and insightful as any literary tome without the pretentious prose. Basically, everything I love in a novel. More than any other book, it made me want to write a novel myself.

Beyond that, I don't have other favorite books, but I do have favorite authors. Each one offers something different. I love Jennifer Crusie for her crackling dialogue. That woman can make you laugh out loud. Janet Evanovich, too. At the other end of the spectrum, Luanne Rice for her sensitivity and ability to write emotion, Emily Giffin for taking on sometimes controversial or unpopular plotlines. Lately, I've discovered Elin Hilderbrand, and boy, does she know how to pack her stories with details, detail, details.
What do you read for pleasure?
I've gone through different phases in my life. As a snippy and, if you believe my mother, cynical teenager, I wanted very little to do with romantic, "soapy" stories. I read mostly mysteries (Agatha Christie, Ngaio Marsh) and World War II novels.

As an adult, I've stuck mostly to commercial women's fiction, though I do throw in a little mystery every now and again. And I do love the occasional satire/black comedy, such as Carl Hiasson and Candace Bushnell. Or Vonnegut.
What is your e-reading device of choice?
I started out with a Nook. Now I mostly use a Kindle Paperwhite, though I've recently added a Kobo app to the mix. I buy from various sources, so I use various devices.
Describe your desk
A cluttered mess. I put things into piles to put away later. "Later" never seems to come! I love having characters in my books who are also writers. In my novel "Who Wants to Know?" novelist/journalist and hero Al Romano remarks to heroine Vicky, "Never trust a writer with a clean desk. It's a sign he's not serious." Wouldn't you know, his shark of an editor has a spotless desk!
Smashwords Interviews are created by the profiled author or publisher. 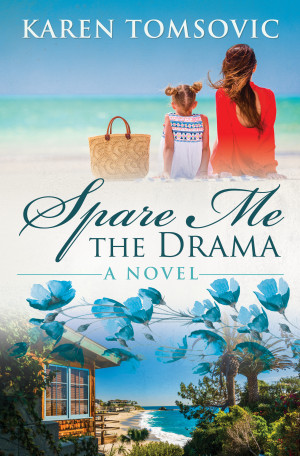 Spare Me the Drama by Karen Tomsovic
Price: $2.99 USD. Words: 101,320. Language: English. Published: November 20, 2018. Categories: Fiction » Women's fiction » General, Fiction » Romance » Contemporary
When harried father of eight Martin remembers that he forgot to invite a special guest to a birthday party for one of the kids, who can blame him? Not sexy star Roxanne, who accepts only to keep a promise to an old friend, not fall for Martin again. 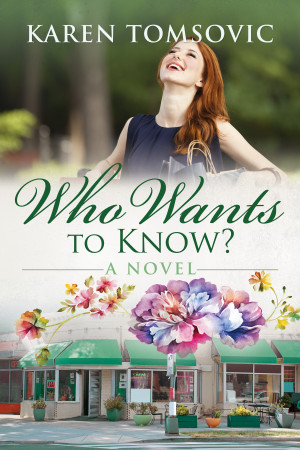 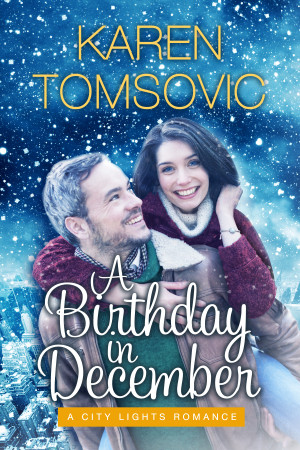 A Birthday in December by Karen Tomsovic
Series: City Lights New York, Book 2. Price: $0.99 USD. Words: 28,340. Language: English. Published: September 23, 2018. Categories: Fiction » Holiday » Christmas, Fiction » Romance » Contemporary
Geoffrey Monroe’s portrayal of Scrooge isn’t winning anyone over on Broadway. But when a sexy young mother moves in across the street, he may find his heart for Christmas after all. Book 2 in the City Lights New York series of romantic comedies. 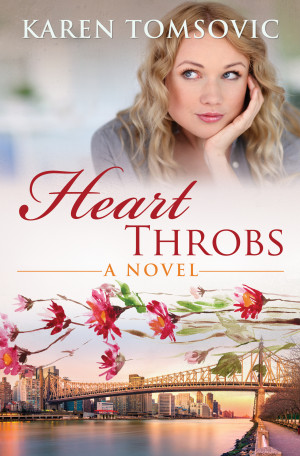