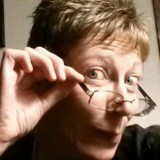 Published 2015-12-30.
What's the story behind your latest book?
My main character, Ruby Daniel, is based on my "L'il Ol' Landlady", a sweet little 90-year-old lady who has, over the past decade, become my very best friend. When she sold the building I lived in, I purposely moved myself and and my then-teenaged daughter into a one-room basement bachelor apartment simply because it was the only place I could find that was close to Ruby's house.

"The Waitress, the Whiskey & the Handcuffs", the first in a 3-part series entitled "The Ruby Chronicles", is based on a true story told to me by Ruby. Her story was a simple little anecdote wherein she was handcuffed to a drunk by a police officer as a joke, and released about 15 minutes later. I thought I could write a better story.

I think I nailed it - Ruby is still angry with me over how I portrayed her mother.
What motivated you to become an indie author?
Sensitivity. I spent so many years collecting rejection slips that I didn't think I could handle even one more.
How has Smashwords contributed to your success?
Smashwords made the publication process easy enough that I didn't give up in tears. Fear was no longer a factor.
What is the greatest joy of writing for you?
Being lost in my own world(s), especially when my characters jump to life and start running the storyline on their own, is my escape from every life problem I have ever experienced. I imagine writing saves me tens of thousands of dollars in professional therapy (not to mention booze).
What do your fans mean to you?
In a word? Everything.
What are you working on next?
I'm currently swearing, crying and ripping out my hair in the writing of "The Restaurant, the Romance & the Speakeasy - Part 2 of The Ruby Chronicles." If my people don't start co-operating, I will be forced to move the publication date forward for a third time.

Sometimes "authoring" is a crap job.
Who are your favorite authors?
Way, way too many to actually list, but I'm going to say Stephen King, Clive Barker and Dean Koontz as my top three.
What inspires you to get out of bed each day?
The thought of being late for work at my night jobs generally does the trick.
When you're not writing, how do you spend your time?
Working to pay the rent... and not cleaning my house (I have a collection of un-crossed-off "To-Do" lists that spans decades).
How do you discover the ebooks you read?
Usually through Kindle searches. LOVE Amazon Kindle!
What is your writing process?
It varies - but all processes involve music, junk food and cigarettes.

And rum.
Smashwords Interviews are created by the profiled author or publisher. 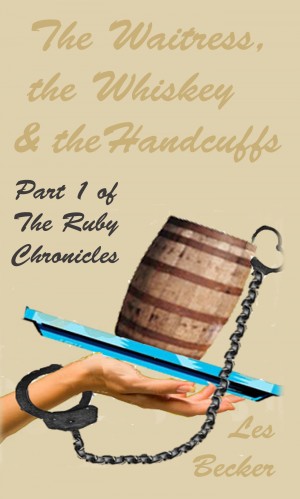 The Waitress, the Whiskey & the Handcuffs - Part 1 of The Ruby Chronicles by Les Becker
Price: $2.99 USD. Words: 12,330. Language: English. Published: November 12, 2014. Categories: Fiction » Humor & comedy » General
When her crude and offensive employer plays an embarrassing prank on her, Ruby Daniel gets revenge with the help of her mother, whose devious tactics and unrestrained glee in the details of retaliation leave Ruby in awe, and a little fearful of the woman who raised her.