Published 2015-10-09.
What is your e-reading device of choice?
My iPad and an old Nook are tied. The iPad because it is so accessible, and the Nook because it is built from the ground up for reading ebooks.
Describe your desk
A Dell Latitude e5410 laptop!
Where did you grow up, and how did this influence your writing?
My first published book is titled Gravel Roads and Other Poetic Journeys. I grew up in central Missouri, in the country, which is actually much more southern than most people think. Most of the poems have a back story which relates directly to where I came from.
When did you first start writing?
As an undergraduate, and then as a graduate student in the 1980s. I wrote a short story, which is now lost, about a minor league baseball player hiding out in Mexico when I was an undergraduate. On a typewriter. I wrote a workbook for couples who were thinking about adopting when I was finishing graduate school when I was studying to be a social worker. I knew nothing about adoption, but figured I really didn't have to since the book was all about couples answering questions together as they considered the process. It was for some publishing outfit in Florida that specialized in counseling, and self-help stuff. In return I got one copy, now it is lost, and a big box full of books that I picked out for myself from their catalog. Other than academic papers, I did not return to writing until I was in my early fifties.
What's the story behind your latest book?
Life as I experienced here in Missouri, and the things that I experienced when I went out into the world as a soldier and sailor, before coming back home to stay.
I grew up on gravel road, but they are all paved over now. The poems are about the roads we take, and how they change, as well as how some vital aspects of them remain the same. Me too. I change, but some vital aspects of me are the same, and I am linked to where, and how, I grew up.
What motivated you to become an indie author?
I would rather write than do anything else. Also, indie publishing is accessible and it levels the playing field. Also, I was amazed at the success some writers have had. I have never read Fifty Shades of Gray but I know the story. I think that if you can write, or at least learn to write through this whole indie process, that eventually you will find the audience that appreciates you.
How has Smashwords contributed to your success?
We'll see :)
What is the greatest joy of writing for you?
Honestly? The finished product in somebody else s hands.
What are you working on next?
Several things. A new chap book entitled Shadows on the Cave Wall, revising a police procedure book called Take Out, and a memoir called Running Ugly which is the story about how I lost 115lbs, and have managed to keep it off. Also, lots of short stories in various stages.
Who are your favorite authors?
Here they are in no particular order with poetry first, and everything else next:

Poetry:
Charles Bukowski
Langston Hughes
all of the Beats

Prose books:
Faulkner
Hemingway
Kurt Vonnegett
Vikram Seth
John Le Carre
Andrea Camilleri
Tony HIllerman
Charles Dickens
Alexander Solzhenitsyn
What inspires you to get out of bed each day?
God, and my family. Absolutely serious.
When you're not writing, how do you spend your time?
Teaching, running, bicycling, walking, cooking, and photography.
How do you discover the ebooks you read?
I have to look very carefully. To be honest for every one I read there are fifteen or so I am not able to finish. However, it is not unusual for me to go to the library, check out fifteen books, and only manage to really read one or two of them. I just made a trip to the library, brought back a huge pile of books, and only one of them was any good. Which by the way was the fascinating book on the recovery of the art treasures of Europe entitled Monuments Men. A must read.
How do you approach cover design?
Very carefully. It has to be good. My experience as a photographer, I was trained in photo journalism at the University of Missouri has been helpful. I am a very visual person. It is easy for me to conceive of the idea, but actually doing it is a lot harder. I need to keep working on it - it is important. The other day I listened to a podcast where the author noted that she was not afraid to experiment, and change, covers. With ebooks you can do that,. I did it today, when the end result was not as good as it needed to be, and I needed to make the lettering much sharper.
Smashwords Interviews are created by the profiled author or publisher. 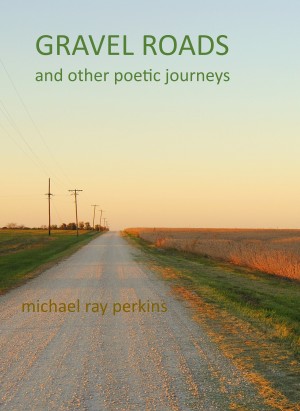 Gravel Roads and Other Journeys: A book of Poetry by Mike Perkins
Price: Free! Words: 4,330. Language: English. Published: October 9, 2015. Categories: Poetry » Contemporary Poetry
A poetry chap book of various styles, some experimental, and various subjects centered on the theme of life as a series of journeys. A collection of 31 poems influenced by Charles Bukowski, Langston Hughes, the incomparable Beats, and the anthology The Outlaw Bible of American Poetry which was edited by Alan Kaufman.