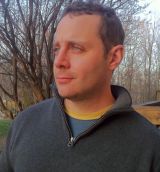 This interview has been viewed 617 times.

What do your fans mean to you?
Having fans and building a readership is critical to an indie writer's success...but not necessarily in the way people think. While it's fantastic--and absolutely necessary for my career--to have others buy and appreciate my works, more importantly, having fans means AFFIRMATION.

It's not just an ego trip. Traditionally published writers (hopefully) have the support of their agents, editors, and publicists from a very early stage. Independent writers don't have that seal of approval until readers actually begin buying, reading, and reviewing their books.

While the wait for those reviews to roll in can be tremendously anxiety-inducing, when they do appear, there's nothing sweeter. It's a direct message from a reader to you: "I like this. This is good. Please write more!"

You can't get better encouragement than that.
What are you working on next?
I recently finished the first draft of Marty Singer #5, THE WICKED FLEE. I've taken a slightly different path with this project than in the past, writing it more as a thriller than a traditional hard-boiled mystery. The pace is faster, there are more character points of view, and I'm trying to make sure the whole thing--from start to finish--takes place in about 10 hours of "book time."

I recently published a short story with Amazon's short story imprint, StoryFront, entitled "The Kindness of Neighbors." It's a creepy, psychological suspense piece of novella length that will have you looking at your neighbors in a different light...

I'm also hard at work cleaning up a stand-alone novel I wrote several years ago, a caper entitled THE ROAD TO STURGIS, trying to tie up loose ends in my stand-alone Western THE ORPHANS, and wrapping up production on the audiobook for ONE RIGHT THING with my awesome narrator, Lloyd Sherr.

With any luck, a short story I wrote for a shared-world science fiction anthology Walk the Fire will be released later this year as well. In six words or less: Joan of Arc in the future.
Who are your favorite authors?
I write and read in several different genres, so I'll have to be a little split-personality here.

In my main genre, crime fiction, no one can beat Elmore Leonard. Robert B. Parker is up there, but I wish he'd cared more towards the end of his career--some of the later Spenser novels are just not good. Barry Eisler, Lee Child, and Henning Mankell are modern favorites. Martin Cruz Smith and James Lee Burke are master of the language and tell some great stories.

In science fiction, Kim Stanley Robinson; specifically, his Mars series. Many of my fantasy writing heroes also wrote in science fiction: Anderson, Zelazny, Silverberg, and Martin. In fact, sometimes I wish Game of Thrones hadn't been so successful; Martin might've had more time to devote to his amazing future fiction (read his two volume, short story collection Dragon Songs and you'll know what I mean). Richard K. Morgan has an amazing style, though I think sometimes his stories take over and run roughshod over him.

Classical fiction: Melville, Hemingway, Robert Lewis Stevenson, many others.
When you're not writing, how do you spend your time?
I'm a video game fanatic. I don't play many different titles, but the ones I do (mostly RPG and strategy games), I'll play five or six times through, put it away for a year, and play again.

For many people, this may seem like a waste of time and there's definitely a component of that, but--especially in the last four to five years--the storylines and amount of production effort that goes into an average role playing adventure game is stunning. The story-telling is quite sophisticated and with ever-more demanding audiences, the level of of dialogue and world-building nuance is mind boggling, sometimes running into the hundreds of thousands of words--that's several novels' worth of writing.
How do you discover the ebooks you read?
I get most of my new reads from word of mouth and personal recommendations, much like I got my paperback suggestions. But I also pay attention to best-seller lists and the random advertisement (like Bookbub's daily email). Naturally, I also tend to stick with writers I like, so will often buy a book site-unseen, so to speak, if it's by a name I recognize.
What is your writing process?
Many guidebooks (and writers) insist that you need to write in the same place at the same time every day. While I think that is an excellent place to start exercising one's writing discipline, I found after a while that it wasn't practical for me. I write full time, from home, so there are many non-routine things poking their nose into my time.

That means sometimes I write in the morning or in the afternoon; at a coffee shop or outside at a picnic table or in my living room. My only hard and fast rule is that I need to get a book done by XYZ date. With six novels under my belt, I know that means I better get about 2,000 words done a day, come hell or highwater, if I want to hit my quota of 2-3 books per year. Everything else is open to negotiation.

In terms of structuring my time, I've found I HAVE to outline. I thought once upon a time that I was an organic writer (also known as a "pantser" as in, "by the seat of your pants"). Experimenting that way produced tens of thousands of unusable words that did very little to contribute towards finishing the book, which is very frustrating. I now know that a solid outline, though dreary to create at times, lets me have confidence that, when I sit down to write, the majority of my work will help complete the project. That's a good feeling.
Do you remember the first story you ever read, and the impact it had on you?
The first book I ever read was A Spell for Chameleon by Piers Anthony. It's the first in his Xanth series, a fantasy line of probably 40 books by now. It introduced me to the world of fantasy and led to many, many hours and dollars being spent at Walden Books at my local shopping mall.
How do you approach cover design?
I make my own covers, so I have stylistic control from the start, which is nice. The oeuvre of crime fiction covers is pretty standard (dark colors, single dramatic photo, blocky sans-serif text), so those parameters help in putting a cover together quickly.

The hard part is making each cover recognizable as part of an ongoing series. I'm still working on that, though I'm very happy with my covers overall.
What do you read for pleasure?
I read more non-fiction than anything, usually books on conservation, architecture, travel, and history: Michael Lewis, Bill Bryson, Witold Rybczynski, Christopher Alexander, Sarah Sushanka.

I find that I dip into the same well for reading as I do for writing, so after logging 2,000-3,000 words a day on crime fiction, for example, often the last thing I want to do is read more of it. Of course, sometimes a knockout comes my way and I'm doubly thrilled then to sink my teeth into a good book.

Also--and many writes will confess to this--writing makes you a VERY critical reader, especially if it's in your own genre, so I derive less enjoyment than I used to with less-than-stellar books. By reading completely outside my genre (and even the fiction vs. non thing), I can relax and enjoy what's in front of me.
What is your e-reading device of choice?
I'm mostly a Kindle guy when I travel, but I'll confess to ereading on my iPad, which lets me grab books from just about any source (i.e., most sellers like Apple, Nook, and Kobo have free apps).

This is something that's puzzled me for years: how can proprietary devices that let you read just one kind of books (like the Kindle) be preferable to "agnostic" devices that let you read from any seller? I love Amazon, but it's a real head-scratcher.
What book marketing techniques have been most effective for you?
Advertising with finely tuned, targeted services like Bookbub, Kindle Nation Daily, and Ereader News Today have given my books a big boost. Indiscriminate sites that don't have reader opt-in for genre and edreader type are not useful.

For sure, social media helps, but I think one mistake is trying to do everything at once: setting up a blog, a Facebook page, a Twitter account, a Pinterest board, a tubmblr page, etc. all on the same day. You'll spend too much time on technologies and not enough time connecting with people (and writing).

A second mistake is sticking with a social media channel that you don't enjoy using or don't understand. For instance, I was a professional web designer and IT manager for years, but I can't wrap my head around Twitter. It's not intuitive to me and I don't use it. It would be a mistake for me to make it my go-to social media channel. But I'm simpatico with Facebook and I love Goodreads, so I spend a lot of time on both and it pays dividends in the form of fantastic contacts, an increase in sales and reviews, and just generally spreading the word about my writing.
Published 2014-05-01.
Smashwords Interviews are created by the profiled author, publisher or reader.