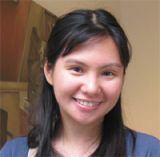 Published 2013-12-21.
Do you remember the first story you ever read, and the impact it had on you?
The first story that actually had an impact on what would become my work as an author? A book called "Teacher's Pet" (Sweet Valley Twins #2). I was at a friend's house when I was eleven and I saw this book on her shelf, and asked to borrow it. It was the first book I'd read about a young person almost my age, and since then I bought, borrowed, and read as many YA books as I could. Eventually I discovered that I liked the romantic subplots of these books, so I focused on that -- and I've been writing YA, NA and adult romance ever since.
How do you approach cover design?
I work with cover artists and designers I trust, and I pretty much let them do their thing. Some of my books are published by Summit Media (a traditional publisher in the Philippines) and so far they've produced wonderful covers without having me be so involved in their process. Tania Arpa is my most frequent collaborator as an indie publisher, and I usually start off with a peg, then she just surprises me with her awesomeness.
What do you read for pleasure?
More romance (but steamier than the ones I write) and YA. When I like an author I tend to get all of their books now. Recently I decided to try books that people just love, even the ones I normally wouldn't pick up. That's worked for me! So far I've been pleasantly surprised.
What is your e-reading device of choice?
I have a Kindle Paperwhite (that I've named Joaquin), but I also read on an iPad and an Android phone. It really depends on what's most handy at the time, although I do get a lot more reading done on a dedicated device like Joaquin.
What book marketing techniques have been most effective for you?
The things I do that I feel work best: Online presence. Being accessible to readers through social media. I give away books a LOT. But the best "marketing" for me is a happy reader, really. I was invited to speak at a university where an entire class knew who I was because of one student liking my book and lending it to everyone.
Where did you grow up, and how did this influence your writing?
I grew up, and still live in, Metro Manila in the Philippines. The most obvious influence that it has on my writing is that the characters in most of my books are Filipino, and they're set in the Philippines. But I grew up reading international-setting (US, UK, etc) novels, and everyone I know who grew up here and reads is so used to those tropes and stories. I've made it my mission of sorts to create stories that are similar, but closer to my experience. At the same time, my family lives in Texas, and I acknowledge that it's also home, in a way. My books are starting to reflect that as well.
What motivated you to become an indie author?
At first I was just surprised that it was free and easy to publish an ebook and have the world be able to buy it. I continued at it, despite already working with a publisher, because of the control being "indie" gave me over every aspect of my book. I think that everything I'm learning about publishing, digital, marketing, and engaging readers is making me a better author.
How has Smashwords contributed to your success?
Smashwords has been so helpful! I rely on it so much since it gets me into retailers that aren't dealing directly with authors in my country. As a retailer itself, I actually like directing people to Smashwords because of the file types offered, the lack of DRM, and how relatively easier it is to pay for the books. By design it actually presents solutions to a lot of the "excuses" I've heard over time, the various reasons why people don't buy, read, or try ebooks.
What is the greatest joy of writing for you?
Getting it right. Usually I have a point to make when I write a story, and I consider my job done when I feel I got it right, that I managed to convey it in a way that another person gets it too. That is a rush.
When you're not writing, how do you spend your time?
When not writing, I do things that are related to writing or publishing: I edit. I help people publish their books. I teach writing classes. I facilitate training programs in publishing. Somewhere in there I manage to read, and eat, and spend time with my family.
What is your writing process?
I now have a tiny notebook in my bag and a nice pen, so I can start writing things down as soon they come to me, wherever I happen to be. The serious writing is scheduled, about an hour a day, three days a week at least, and that's ideally just re-writing what's in the notebook. I find that this is a better use of the limited time I have and cuts down the staring-at-the-laptop-screen that tends to happen when I schedule writing time and have nothing pre-planned.
Smashwords Interviews are created by the profiled author or publisher. 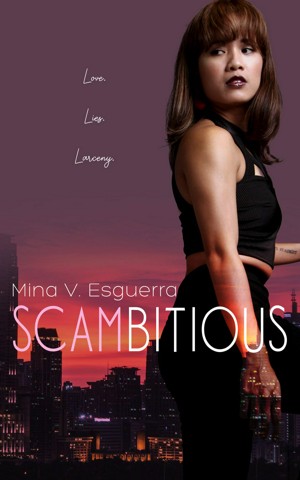 Scambitious: The Complete Series by Mina V. Esguerra
Price: $3.99 USD. Words: 43,140. Language: English. Published: April 16, 2022. Categories: Fiction » Romance » Suspense, Fiction » Mystery & detective » International crime
Jane likes to pretend to be other people. Don't trust her with your money, your things, or your heart. This edition compiles all four Scambitious stories into one book. Stories must be read in order. 42,900 words. 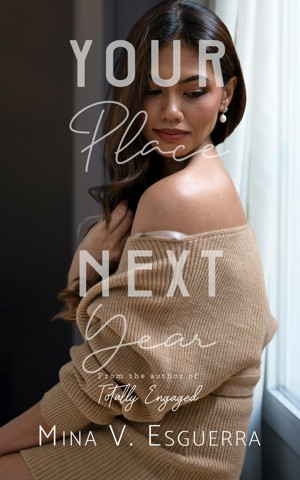 Your Place Next Year by Mina V. Esguerra
Price: $2.99 USD. Words: 14,600. Language: English. Published: November 26, 2021. Categories: Fiction » Romance » Contemporary, Fiction » Romance » Later in Life
In another time corporate exec Alia Monterojo would have been in La Union at the end of summer, with a certain someone who doesn't even know her full name. She's missed the trip for several years now, for good reason. This year, she gets her chance, when he shows up at the breakfast meeting as the CEO of a company she might have to acquire. 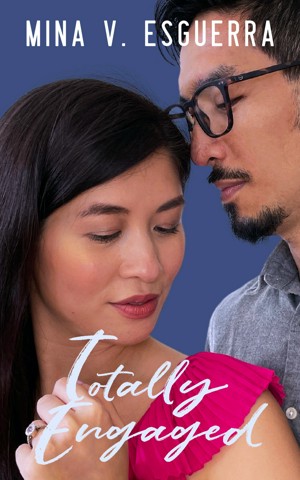 Totally Engaged by Mina V. Esguerra
Series: Six 32 Central. Price: $3.99 USD. Words: 43,970. Language: English. Published: May 14, 2021. Categories: Fiction » Romance » Contemporary, Fiction » Women's fiction » Chick lit
Rose is 41 and (believe it or not) doesn’t want a green card marriage, so she asks Pascal to be her fake fiancé while her balikbayan family is in town. 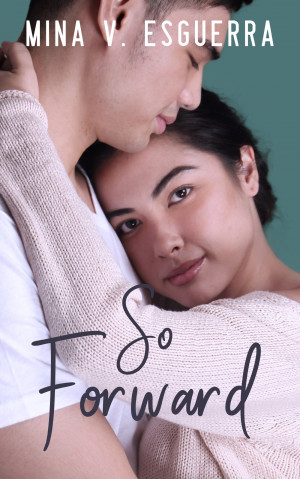 So Forward by Mina V. Esguerra
Series: Six 32 Central. Price: $3.99 USD. Words: 43,270. Language: English. Published: July 15, 2020. Categories: Fiction » Romance » Contemporary
Lexa Lorenzo is determined and driven, and should be her family corp’s next CEO. But she’s all business, not enough heart, and her mentor/aunt wants her to be more accessible, approachable, “charming.” As luck would have it, Lexa’s alma mater calls her in to help a graduating MBA student—and it’s Colin Valerio, fellow winter sports athlete, walking/talking ball of charm. Let the lessons begin. 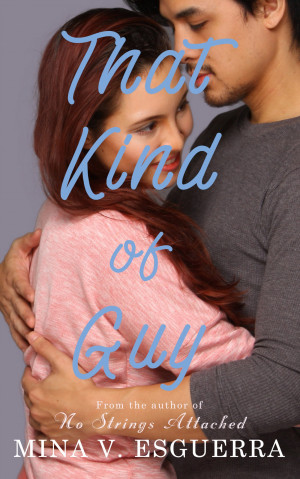 That Kind of Guy by Mina V. Esguerra
Series: Chic Manila. Price: $2.99 USD. Words: 31,270. Language: English. Published: January 11, 2020. Categories: Fiction » Romance » Contemporary, Fiction » Women's fiction » Chick lit
Yes, it’s true: "Good girl” Julie Crisostomo dated that guy Anton Santos for almost a year. Julie is everyone’s loyal and concerned friend, but she has no experience being someone’s girlfriend. Then Anton, a “player” she never thought would be interested in her, swoops into her life and doesn’t seem to want to leave it. 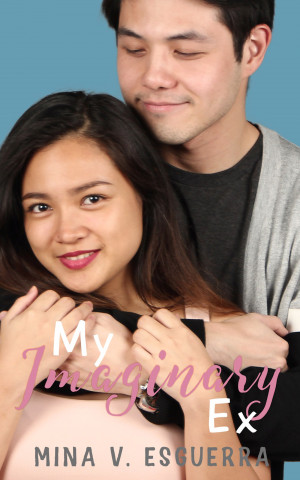 My Imaginary Ex by Mina V. Esguerra
Series: Chic Manila. Price: $2.99 USD. Words: 27,660. Language: English. Published: October 1, 2019. Categories: Fiction » Romance » Contemporary
Zack and Jasmine never dated, but no one else knows that. That story started in college, because she was being a good friend, and he needed help with something. The friendship and affection that followed were very real, but the lie kept causing trouble. Revised and expanded edition of My Imaginary Ex 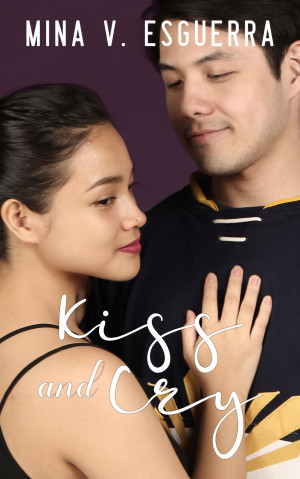 Kiss and Cry by Mina V. Esguerra
Series: Six 32 Central. Price: $3.99 USD. Words: 43,800. Language: English. Published: March 1, 2019. Categories: Fiction » Romance » Contemporary, Fiction » Romance » Contemporary
Figure skater Calinda met hockey player Ramirez when she was 20 and he was 22. Her parents and coach were against their relationship, and because Calinda wanted to prove that no hot guy would ever distract her from her dream, she chose skating over him—and also avoided him all together. Ten years later, they meet again, and use his final three weeks in Manila to explore what might have been. 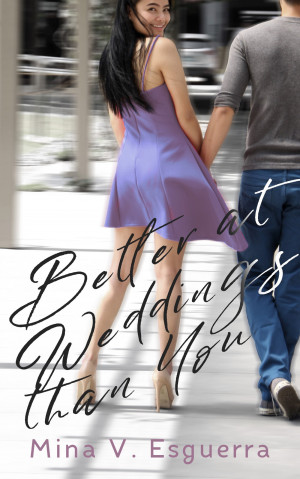 Better at Weddings Than You by Mina V. Esguerra
Series: Chic Manila. Price: $3.99 USD. Words: 42,170. Language: English. Published: January 4, 2019. Categories: Fiction » Romance » Contemporary, Fiction » Women's fiction » Chick lit
Daphne is the best wedding planner in Manila, and she's been hired to take over a wedding in crisis mode. Aaron had that job but he's new to the business, is an old friend of the bride, who might be falling for him...it's a mess. Who's the planner who can fix this disaster? 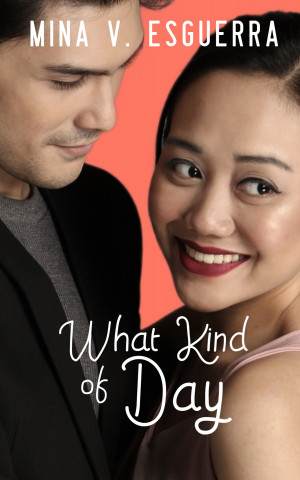 What Kind of Day by Mina V. Esguerra
Series: Six 32 Central. Price: $3.99 USD. Words: 41,700. Language: English. Published: May 31, 2018. Categories: Fiction » Romance » Contemporary
Ben is a (fired) senator's speechwriter. Naya is an indie tour guide. He accidentally joins her tour, a tour of his own city, and she lets him stay on because he's having a really bad day. She's hoping she won't regret it. He's hoping his luck turns around. What kind of day could it be? Maybe the best kind. 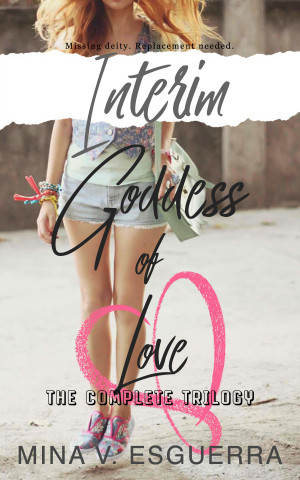 Interim Goddess of Love: The Complete Trilogy by Mina V. Esguerra
Price: $5.99 USD. Words: 89,840. Language: English. Published: January 17, 2017. Categories: Fiction » Young adult or teen » Fantasy, Fiction » Romance » Fantasy
College sophomore Hannah Maquiling doesn't know why everyone tells her their love problems. She's never even had a boyfriend, but that doesn't stop people from spilling their guts to her, and asking for advice. So maybe it shouldn't be a surprise when the cutest guy in school tells her that she's going to have to take on this responsibility -- but for all humanity.
View their profile to see all of their books