Published 2013-10-14.
What is your writing process?
If I'm writing a script, I usually figure out most of the characters and the setting first. If the script is based on a story, I re-read the story. Then I outline. Most stories take place over several days, months or years but if I'm adapting it for the stage then I don't want my play to be that stretched out.
If I'm writing a novel during November's National Novel Writing Month, I type as fast and as furiously as possible. I don't have an outline, or characters in my head, except for maybe my first character. Then I make it up as I go along. It's been such a freeing process to create characters at the moment I need them or plot twists or even the surroundings. Granted, there's a lot of editing that has to be done afterwards, but I have to do that anyway.
Do you remember the first story you ever read, and the impact it had on you?
I've been read to and reading since I was so young that there's no way I remember the first story. But I do remember lots of trips to the library - both school libraries and public libraries. I saw my kindergarten teacher when I was in my early 20's and she told me that when she would announce reading time, I would get a book and pour over it. I remember that my third grade teacher always read chapter books to the class after lunch. I remember loving Where the Wild Things Are, but I'm not sure if that's when I was a young child or when I was a little older reading it to my baby brother. I absolutely loved - and still do - fairy tales, fables, myths, folktales, and tall tales.
How do you approach cover design?
Ack! With great trepidation. I do have an illustrator friend who has made a cover for me. I've used iStock photos and changed them up a bit...or not changed them much because I get intimidated. There's also a covers service that I found on Facebook - I watch the covers they have coming through, ready to pounce on anything I think would work for upcoming books or novels I'll be publishing.
What are your five favorite books, and why?
1. The Phantom Tollbooth, by Norton Juster - I love the puns and wisdom and words. Great story!
2. The Chronicles of Prydain - Great fantasy books of a young boy who learns about people and honor and self as he grows up an assistant pig keeper but wanting to be a hero. Lloyd Alexander won a Newbery Award for the last book in the series - The High King.
3. The Chronicles of Narnia, by C. S. Lewis - Poignant fantasy. It's quite the allegorical adventure. "Further up and further in!"
4. The Hobbit and the Lord of the Rings, by Tolkien. Love them! There is no why; I just do. 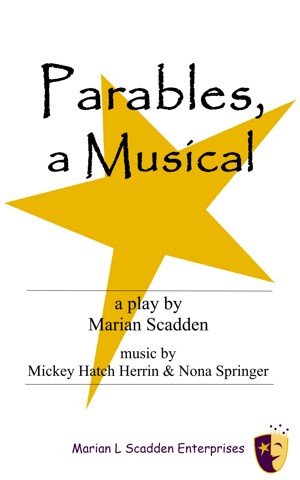 Parables, a Musical by Marian Scadden
Price: $2.99 USD. Words: 15,590. Language: English. Published: July 3, 2021. Categories: Plays » Religious & Liturgical, Plays » Ancient & Classical
Several parables told by Jesus Christ are woven together in the lives of people living around Jerusalem. There are 16 original songs, from serious to fun. Even the sheep get their own song. Running Time: 1 hr 50 min. Cast: 6 female; 6 male; 26 + either, doubling possible. To produce this play, you must first receive written permission in advance of production. 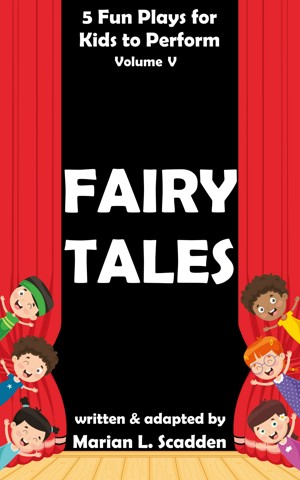 5 Fun Plays for Kids to Perform Vol. V: Fairy Tales by Marian Scadden
Price: $5.99 USD. Words: 33,220. Language: English. Published: May 31, 2021. Categories: Fiction » Plays & Screenplays » American, Fiction » Fairy tales
In these magical stories, we meet giants and royalty, pigs and wolves and even a fairy godfather. The scripts are for kids 8-11. Running time is 30-ish min & casting of 24-30. The scripts are not royalty-free; contact info is at the end of the book. Play titles: The Beanstalk Stories; Fairy Tales, Tairy Fales; Three-3-III; Magical Factual Planet Pursuit; The Empress’s New Clothes. 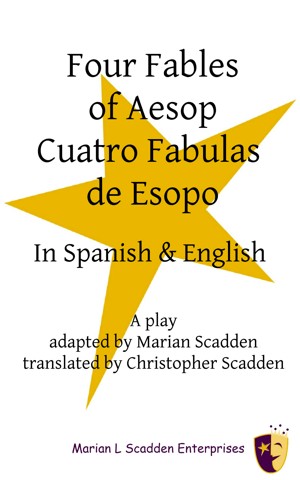 Four Fables of Aesop Cuatro Fabulas De Esopo by Marian Scadden
Price: $1.99 USD. Language: English. Published: December 5, 2020. Categories: Fiction » Children’s books » Fairy tales & fables, Fiction » Children’s books » Performing Arts / Theater
In this adaptation for children, 4 fables are in Spanish and English. The fables are: The North Wind and the Sun, The Tortoise and the Hare, Belling the Cat, and The Ants and the Grasshopper. NOTE: Permission required to perform this play. Contact info at end of book. 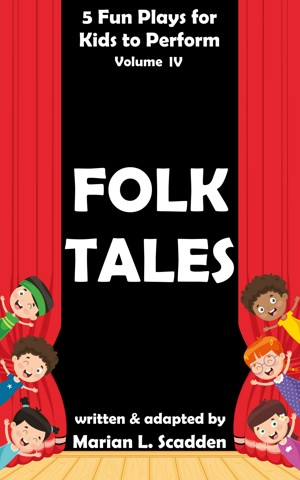 5 Fun Plays for Kids to Perform Vol. IV: Folk Tales by Marian Scadden
Price: $5.99 USD. Words: 30,810. Language: English. Published: April 3, 2021. Categories: Fiction » Plays & Screenplays » Anthologies, Fiction » Children’s books » Fairy Tales & Folklore / Adaptations
These 5 folk tales feature clever beings outwitting others. The scripts are for kids 8-11. Running time is 30-40 min, & casting of 20-32. The scripts are not royalty-free; contact info is at the end of the book. Play titles: The Annual Conference of the Genii in Regard to the Peculiar World of Humans; The Bremen Town Musicians; But Why; Just So, It Happened; The Tiger, the Brahmin, & the Jackal 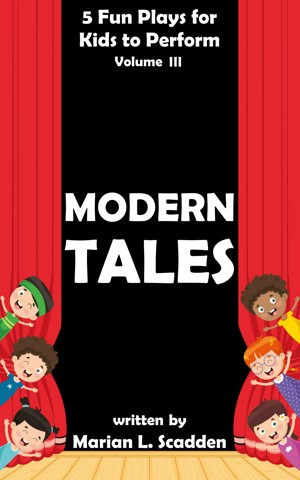 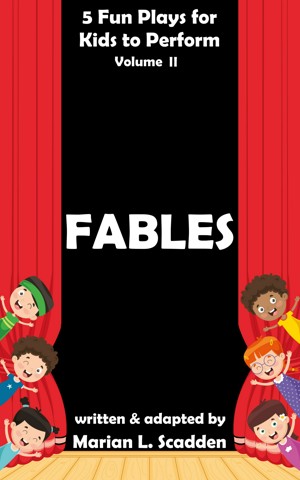 5 Fun Plays for Kids to Perform Vol. II: Fables by Marian Scadden
Price: $5.99 USD. Words: 39,320. Language: English. Published: November 7, 2020. Categories: Fiction » Plays & Screenplays » Anthologies, Fiction » Children’s books » Fairy Tales & Folklore / Adaptations
There are actually 6 plays in this volume of plays for children. Each run 30-ish min, with casts of 18-25. The scripts are not royalty-free; contact info is at the end of the book. This collection includes: The Crows and the Coral Snake Eggs; Everybody Knows That; Fables; Three Fables of Aesop & Four Fables of Aesop; A Tortoise and a Hare in Africa, Two Fables. 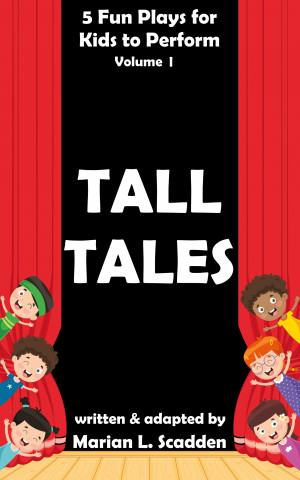 5 Fun Plays for Kids to Perform Vol. I: Tall Tales by Marian Scadden
Price: $5.99 USD. Words: 24,830. Language: English. Published: October 3, 2020. Categories: Plays » American / African American, Fiction » Children’s books » Fairy tales & fables
These fun plays with songs are great for kids, 8-11. The plays run 30-ish min, with casts of 20-30 and doubling possible. These scripts are not royalty-free; contact information is at the end of the book. This collection includes: The Adventures of Pecos Bill; The Encounters of Paul Bunyan; The Legend of Annie Christmas; It Could’a Been (a play with three storylines); When Elvy Caught the Rainbow. 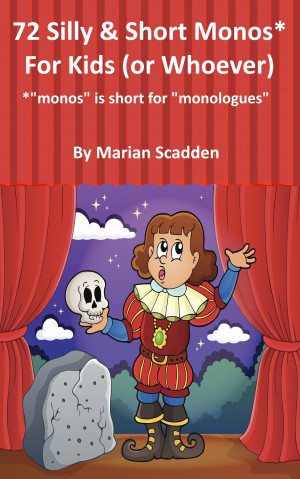 72 Silly & Short Monos* for Kids (Or Whoever) by Marian Scadden
Price: $1.99 USD. Words: 13,390. Language: English. Published: September 27, 2017. Categories: Plays » American / African American, Fiction » Children’s books » Performing Arts / Theater
*"monos" is short for "monologues." These 72 monologues have 100-200 words, perfect for short performance pieces in class, in a talent show, or in the living room. There's a variety of genres ranging from contemporary to sci-fi to fantasy. The topics are an eclectic assortment, appealing to many interests. Some of the titles are: Blood; A Bug; Carnival; The Secret Frog; Where's the Remote; Zoo. 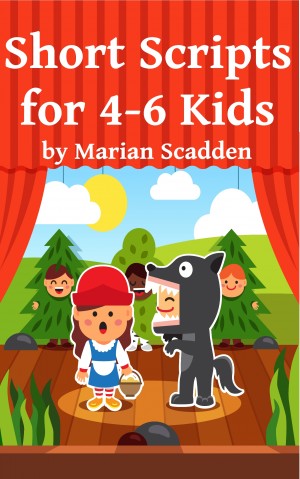 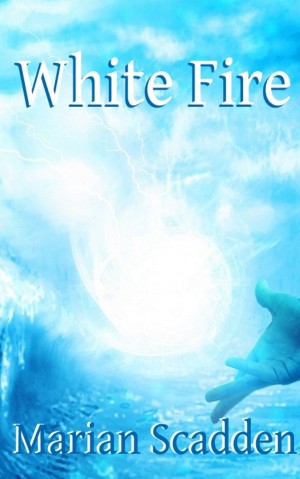 Delsina returns with water to her home and mentions a stranger was asking about them. Her peaceful family reaches for their weapons as her oldest brother, Talem, picks her up and runs. She watches as the stranger who carries fire in his hands burns her home and family. As they make their journey away from Sethrum, Man of Fire, Talem reveals to Delsina who she really is.
View their profile to see all of their books