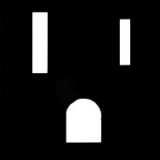 Published 2015-07-01.
What inspires you to get out of bed each day?
The morning bike ride. I am an avid single-speed cyclist. I seem to get the best ideas when riding my bike. It's as much a neural exercise as a physical one.
How do you discover the ebooks you read?
I seem to stumble upon them on the internet. Were they magically placed there? Ha-ha.
Do you remember the first story you ever wrote?
Hmmmm .... a very, very short story ... really just a sketch ....
What is your writing process?
First, a very loose, changeable outline. I don't like to map everything out and just fill it in like a coloring book. Usually by the third or fourth chapter (or the 20th page of a novella), the story will have a life of its own, and the characters will be demanding certain things to happen.
Second, as I write the chapters (or sections), at first it is almost all narrative. Then I go back and insert/expand the dialogue. Next, I add the thoughts of the characters (in italics).
Third, revising and revising, and more revising for at least a month or three.
Fourth, the cover graphic, which i will create myself in a free photo-editing program.
Do you remember the first story you ever read, and the impact it had on you?
'His Enemy, His Friend' by John R. Tunis still sticks in my mind. It really gripped my adolescent mind. And I loved the unexpected (to me) ending.
How do you approach cover design?
As a visual artist, I relish this aspect of the e-book creation process. I usually take a stock, royalty-free, public domain pic and spice it up in a photo-editing program.
What are your five favorite books, and why?
1. His Enemy, His Friend (the madness, insane cruelty, and haunting tragedy of war)
2. One Flew Over The Cuckoo's Nest (Nurse Ratched, a walking metaphor of conformity)
3. The Electric Kool-Aid Acid Test (sure wish I was on that bus - was way too young)
4. Still Life With Woodpecker (no need to be afraid to write a bizarre tale)
5. Hornet's Nest (pure vanity here: my artwork is mentioned in it - m. van tryke)
What do you read for pleasure?
To be honest, a lot of articles on The Guardian website. I even comment frequently.
What is your e-reading device of choice?
An older black-and-white kindle.
What book marketing techniques have been most effective for you?
Google Adwords.
Describe your desk
A mess of papers. But, I think I know what is under each stack. Maybe.
When did you first start writing?
1991. Surreal poem-stories displayed below my artwork in NoDa (North Charlotte).
What's the story behind your latest book?
Ok, 'GOLD, a summer story' is my first and only novel to date. The idea came to me back in the summer of 1995, while out in the Reed Gold Mine area of NC. I didn't find any gold in the nearby creeks/rivers that day, but I wondered what would happen to my life if I did. Not a small amount - a large nugget, or several nuggets, worth a million dollars or more. Who would I trust? Could I trust my girlfriend? How would i get the gold sold? Would I move to another city?
What motivated you to become an indie author?
Doubleday wasn't returning my calls. Ha-ha.
How has Smashwords contributed to your success?
YES! Already lots of downloads. Should've checked into this site earlier. Got caught in the amazon-only trap for two years. This feels liberating.
What is the greatest joy of writing for you?
Concisely conveying a certain notion/idea/sensation to the reader.
What do your fans mean to you?
The world!
What are you working on next?
Thinking of doing a very experimental 'novel' where the readers get to add to subsequent editions of it.
When you're not writing, how do you spend your time?
Inventing new games, doing artwork, hiking, cycling, and goofing around with my wife and son.
Who are your favorite authors?
Kesey, Poe, Wolfe, Kerouac, Bukowski
Have you ever found any gold yourself?
Only in the bottom of a Goldschlager bottle.
What is your hometown?
Charlotte, or 'crown town' as I heard someone call it the other day.
Do you have a favorite sports team?
I'm a homer; thus, I'm a Panthers (NFL) and Hornets (NBA) fan.
However, I get my biggest joy out of watching Liverpool FC - Go Reds!
What do think about erotic fiction?
It all is until it isn't.
Smashwords Interviews are created by the profiled author or publisher. 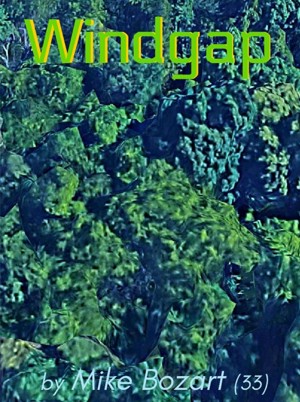 A male sexagenarian recounts a psychedelic outing in western Pittsburgh in 1973. Over the four-plus decades, many of the dectet have died. Then a phone call from the shy Latina. Time to compare notes. Is Wayne's time up? Approx. 2K mots. Rating: PG-13 (mentions of psychoactive substance usage). 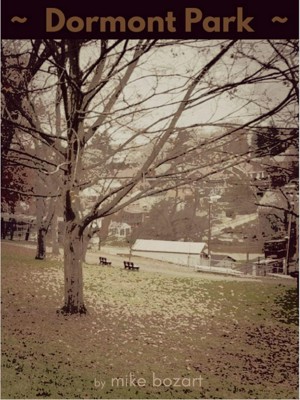 An interracial couple goes for their customary weekend exercise excursion at a park near the boundary with southwestern Pittsburgh. All starts out well enough. But then one of them makes a costly bad decision. And an older couple on a bench remain a mystery. Rated R. 2121 mots.

Mysterieau Resurfaces by Mike Bozart
Price: Free! Words: 2,220. Language: English. Published: February 21, 2022. Categories: Fiction » Visionary & metaphysical, Fiction » Themes & motifs » Psychological
A very strange, multi-faceted, coarse-tongued, bizarrely costumed performance artist re-alights in Pittsburgh after a long national absence on a winter night at an East End dive bar. His act gets off to an icy start, but then gains some momentum. And then it all goes down the drain. (2222 mots). 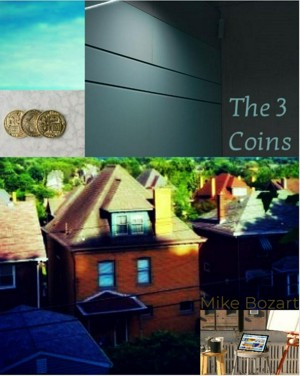 The 3 Coins by Mike Bozart
Price: Free! Words: 1,920. Language: English. Published: January 27, 2022. Categories: Fiction » Adventure » Men’s adventure, Fiction » Themes & motifs » Psychological
An average 40-something man comes across three strange coins in northeastern Pittsburgh on a May day in 2021. He then becomes bent on figuring out if they are worth anything. An Asian American lady in an unlikely store may know something about the coins. But, he is hesitant to trust what she says. However, the lure of easy-to-be-had casual sex sends his pragmatic plan out the window. [1919 mots] 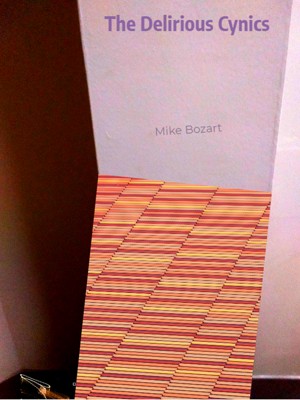 The Delirious Cynics by Mike Bozart
Price: Free! Words: 2,940. Language: English. Published: January 13, 2022. Categories: Fiction » Themes & motifs » Psychological
A 60-something male befriends a 50-something female online. The two Pittsburgh residents both have not-so-positive attitudes regarding humanity, which they perversely enjoy. On a gray winter day, they decide to advance their cyber-friendship to something more in a meetup. All seems to be going well. Oh, the strange things that one shall ingest. In jest. Rating: PG-13. Word count per MS Word: 2929. 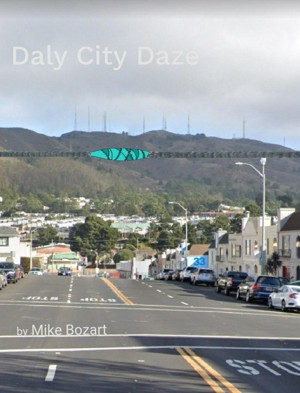 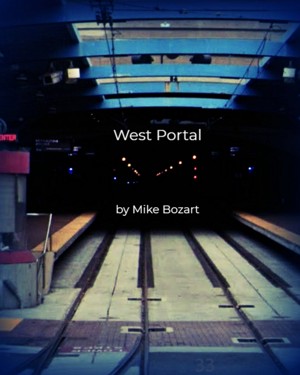 West Portal by Mike Bozart
Price: Free! Words: 2,020. Language: English. Published: November 29, 2021. Categories: Fiction » Biographical, Fiction » Themes & motifs » Psychological
Agents 32 and 33 traipse around San Francisco on a grey October day, finally alighting in the West Portal neighborhood. All is going relatively well, but thoughts of what might have been pervade. Uncertainty abounds. The tram carries memories down the line. Rated G: ok for all ages. Word count 2020 (per MS Word). 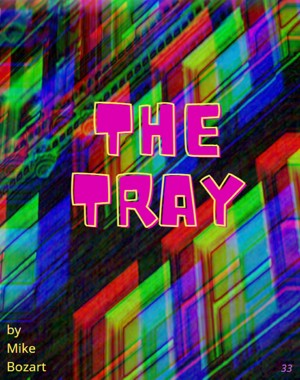 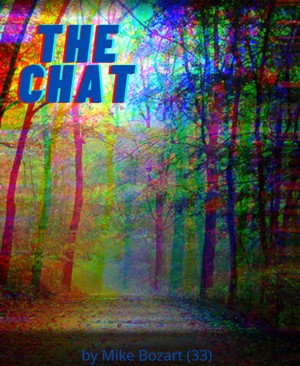 The Chat by Mike Bozart
Price: Free! Words: 2,830. Language: English. Published: September 28, 2021. Categories: Fiction » Thriller & suspense » Psychological thriller, Fiction » Themes & motifs » Psychological
A single, middle-aged man in Pittsburgh is contacted out-of-the-blue by a strange, very frank, date-seeking, mid-30-ish, attractive lady. An online chat ensues. Her circumstances are uncertain. Doubt and suspicion arise. Is she telling him the truth? Is she just another gift-card scammer? Who will the man really meet? Anyone? Will he live to see tomorrow? Rating: PG-13 (some sexual innuendo). 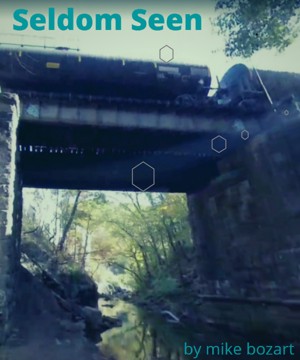 Seldom Seen by Mike Bozart
Price: Free! Words: 1,510. Language: English. Published: August 23, 2021. Categories: Fiction » Literary collections » Native American, Fiction » Themes & motifs » Psychological
A day-date in south Pittsburgh some two decades prior is recalled on a perfect autumn day. Thoughts of 'where is he/she now?' pervade. And then on the local news later that night ... Rating: PG-13 Word count: 1515 (per MS Word)
View their profile to see all of their books