What do these books have in common? They all won Pulitzer Prize for fiction. It was my hobby to read all of them going back to my birth year of 1959
What do you read for pleasure?
Pulitzer Prize-winning fiction; Sports Illustrated
Where did you grow up, and how did this influence your writing?
I grew up in Oswego, Ill. Outside of English classes, I'm not sure it influenced me much. Maybe the Midwest roots helped me stay grounded, kept my writing understated.
When did you first start writing?
Terry Coley, sports editor of my hometown newspaper, the Oswego Ledger-Sentinel, hired me to cover the town's summer sports so he could take a vacation. I believe I was out of college, summer of 1981
What's the story behind your latest book?
Rob Holder, the subject of my book, lived a couple houses down the same street in a Golden, Co. neighborhood. He was commuting down to Colorado Springs to coach the Air Force rugby team. He led Zoomies to incredible upset of perennial champion Cal, which led to Rob getting hired away by Stanford. After a fallout at Stanford, Rob wound up coaching a "bunch of thugs" as the players themselves called themselves, from East Palo Alto to a national rugby title.
What motivated you to become an indie author?
The few publishers I called about this story, we got rejected. We had a friend of a friend recommend we self-publish
What is the greatest joy of writing for you?
When it's done. When people say they enjoy it. There is more research involved in almost every story than people realize. Finding nuggets of pertinent information is gratifying.
When you're not writing, how do you spend your time?
I work out. I read. I work (9News TV/9News.com Broncos reporter)
What book marketing techniques have been most effective for you?
Twitter, Facebook, radio interviews. Speaking at service groups. TV spots
Who are your favorite authors?
Vonnegut, Updike, Rick Reilly, Steve Rushin, Mike Royko, WC Heinz
Smashwords Interviews are created by the profiled author or publisher. 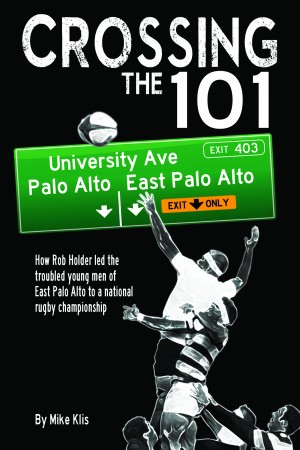 Crossing The 101 by Mike Klis
Price: $8.99 USD. Words: 28,510. Language: English. Published: March 23, 2016. Categories: Nonfiction » Sports & outdoor recreation » Football & rugby » Rugby, Nonfiction » Inspiration » Spiritual inspiration
This is the remarkable story of Rob Holder, coach of the East Palo Alto Razorbacks, who through rugby, his own personal setbacks, his family and his faith provides inspiring lessons of how we should value humility above ambition, honesty above stature, altruism above entitlement. Most of all, Rob’s story teaches us that people should not be judged by color, class status _ or even their rap sheets.