Published 2015-11-07.
Do you remember the first story you ever read, and the impact it had on you?
Dick and Jane books come to mind...but seriously, the only impact they had on me was that I was finally READING!!
One of the first books that impacted me though was "Little Women" by Louisa May Alcott. It was during the reading of that book when I decided I wanted to be a writer, just like Jo.
Where did you grow up, and how did this influence your writing?
I grew up in Milwaukee, Wisconsin. I don't believe WHERE I lived had as much to do with influencing my writing as WHO I lived with. My mother was (and still is) an avid reader, and whenever she wasn't busy with the kids, cooking or cleaning, her face was buried in a book. I remember reading a lot of her books, even the ones she had hidden in her room! And you know what they say about being a decent writer: you should also be a reader.
When did you first start writing?
I wrote a few short stories in high school and dabbled in poetry during my early twenties. But even though I always wanted to write, somehow life kept getting in the way...until, one day while home schooling my youngest son, I finally started. I wrote a romance novel - but never got back to editing it, (and boy did it ever need it!). We ended up moving 3 times after my son finished school and I worked full time during those years, never finding enough energy to do much of anything after work. When we finally moved back to Wisconsin I stayed home and helped with two of our grand kids, finding myself with no more excuses for not writing. I dug out that novel and began the huge task of re-writing. Sometime during those months of editing, I had a dream. The most vivid dream of my life in fact, causing my first novel to be put on hold - again.

Thus began the Ravenswynd Series. And crazy as it sounds, right in the midst of editing book 3 of the series, I started writing "River of Time". (Guess I'm a glutton for punishment)

The rest is history...
What genre do you normally write in?
So far, all of my books are romance novels. My current work in progress will be considered contemporary romance without a hint of anything paranormal at all, but it's still a bit unusual since it deals with the mind. The Ravenswynd Series is paranormal romance with a "family" of vampires and a Prophetess, (sorry no werewolves) and River of Time is a time-travel romance novel.
I'm also working on two more time-travel books, one of which may or may not deal in a bit of paranormal activity...
So, to answer the question, I usually just sum it up by saying:
I write romance novels...with a twist.
What is your writing process?
I have never done an outline, so I guess I'm more of a pantser. I do keep a notebook handy to keep track of my character's names, ages, defining characteristics and general looks. (I hate it when chapter one depicts the girl with blue eyes, and they somehow morph into green by the end of the book) And the more characters in a novel, the more we need to keep track...
There have been a few times that I've written the beginning and the ending of a book - long before the middle, but what continues to surprise me is when the character takes over and the story suddenly turns in a whole new direction than I thought it would. (Gotta love that muse!)
What's the story behind your latest work in progress?
That's a funny question, since my latest WIP is actually my FIRST novel. After publishing the Ravenswynd Series and "River of Time" in 2013, I decided to really push myself to finally get busy with my first book. Once I started re-reading it, I realized it needed to be told from a different point of view. Actually from several points...and I'm working really hard to make it easy to see who is who. (I've read a few books where the writing suddenly changes to another character's POV, and was lost for several paragraphs before figuring it out) I'm sure my editor will make sure it's not too confusing!

I'm now finished, and the book, Song of Memory will be available here on Smashwords mid-November. It's a contemporary romance novel that, believe it or not, was also inspired by a dream.

This is a story about two lonely people who, after a twenty year separation, attempt to piece together exactly what happened to rip them apart.
How do you approach cover design?
I usually have a picture in my mind long before the book is finished, and sometimes I search the internet for photos or ideas myself, but I do have an awesome artist who works with digital art and photography...and all I have to do is tell her a bit about the book, what ideas are in my head, and she comes up with several pictures that she somehow magically puts together into a beautiful cover.
Who are your favorite authors and books?
Without a doubt, my all-time favorite author is Diana Gabaldon. Her Outlander series is simply amazing; so awesome in fact, that many bookstores do not know where to place them. There is a mix of many genres, including elements of adventure, mystery, romance, historical fiction, science fiction/fantasy and did I mention hot romance? Diana's ability to describe a scene is so good, that you feel like you-are-there.

I also enjoy books by Barbara Kingsolver, (The Poisonwood Bible), Audrey Niffenegger, (The Time-Traveler's Wife), Jean Auel, (The Clan of the Cave Bear series), and most books by Nicholas Sparks, J.R.R.Tolkien and C.S.Lewis.
When you're not writing, how do you spend your time?
For the past 5 years I've been helping my parents (they live 4 doors down and no longer drive). When I'm not busy with them, I enjoy spending time with my kids and grand kids, reading, networking with fellow writers and readers, or watching good movies.
What do you read for pleasure?
I read a lot of romance novels, although I do like some science-fiction and adventure stories. Now and then I can get into a good who-done-it, and I'll read anything that includes time-travel.
What's the story behind your latest book?
Ever since reading "The Time Machine" as a kid, I've imagined what it would be like to travel through time and always knew I had to bring it into my stories.

One day while at the kitchen sink, this idea hit me and I sat down and started writing "River of Time", a contemporary time-travel-romance novel.

Unable to let go of the past, Maggie St.James' only desire is to "fix" her broken marriage. Confident she's found the way to travel through time, she makes a ridiculously dangerous plan. But will the benefits outweigh the risk? With every detail planned perfectly, she begins her journey. But there are two things she hadn't planned on: how to return to her own time... And meeting Logan Maddox.
What are you working on next?
I've finished another time-travel novel, and I'm really excited about it, and I've started another one, but it will be a while as there is a ton of research I need to do.

"Garden of Time" is about a woman who finds herself in the 1800's. She will meet Native Americans and another time-traveler. Yes, it will be another romance book.

I'm still working on "Island of Time" is a story about a woman and a wolf. The woman travels back and forth through time - at least she thinks she does...(It's a work in progress, and only my muse knows the outcome!) Once again, I'm quite sure it will be considered romance.
What is your e-reading device of choice?
Kindle
Smashwords Interviews are created by the profiled author or publisher. 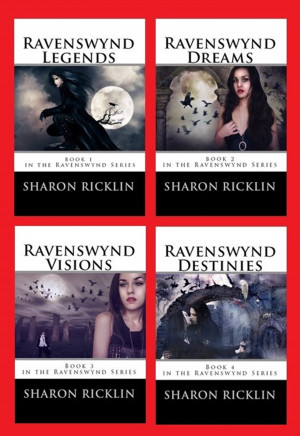 The Ravenswynd Series Boxed Set by Sharon Ricklin
Price: $8.97 USD. Words: 333,030. Language: English. Published: October 10, 2017. Categories: Fiction » Romance » Paranormal, Fiction » Romance » Paranormal
There's a legend...about a party...hosted by vampires. An event so exclusive - the invitation is by word of mouth - with strict rules that must-be-followed. So what happens when your best friend is invited and practically begs you to go along with her? You go, of course! Everyone's having fun...at first... 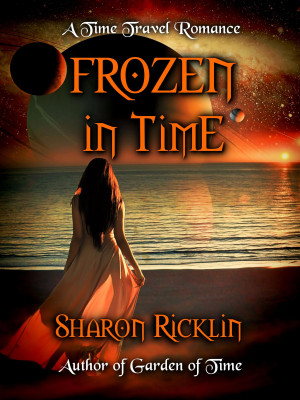 Frozen in Time by Sharon Ricklin
Price: $2.99 USD. Words: 69,870. Language: English. Published: October 27, 2016. Categories: Fiction » Romance » Time travel
Ripley Tremont has been missing since April of 2016. There’s been talk about kidnapping, murder, and a possible cover-up. The most often circulated rumors are the wild claims of alien abduction. Although she did not leave home of her own volition, Ripley won’t be coming back, and looking for her would be a waste of time. Ripley Tremont is alive and well, and living in the year 2416. 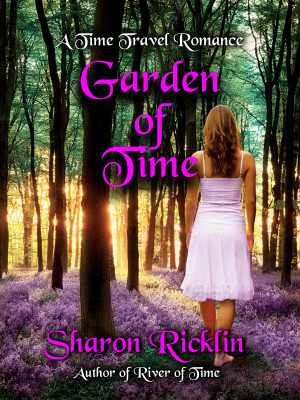 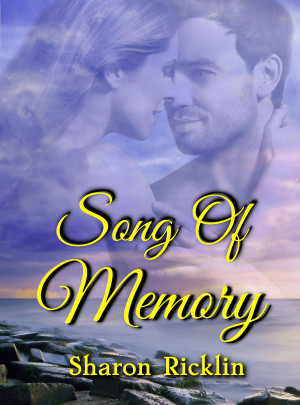 Song of Memory by Sharon Ricklin
Price: $3.49 USD. Words: 156,760. Language: English. Published: November 9, 2015. Categories: Fiction » Romance » Contemporary, Fiction » Women's fiction » General
Life is a song. Love is the music. After a mysterious separation of nearly twenty years, Jack and Sara must try to piece their lives back together. What ripped them apart? Will Sara ever remember? Join them on their journey of gut-wrenching loss, twists and turns, and heart-warming discoveries. 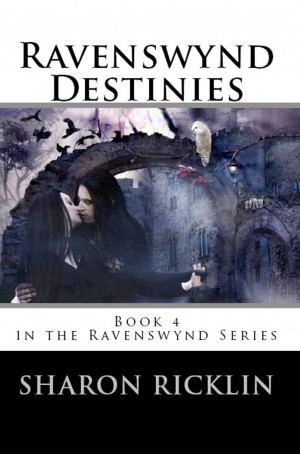 Ravenswynd Destinies by Sharon Ricklin
Series: Ravenswynd, Book Four. Price: $2.99 USD. Words: 81,340. Language: English. Published: November 29, 2013. Categories: Fiction » Romance » Paranormal
What could be worse than being stalked by a rogue vampire? Finding out that there are even more things lurking - in plain view... There are hunters out to exterminate your very existence... And everyone that you know and love is in danger... (book 4 in the Ravenswynd Series) 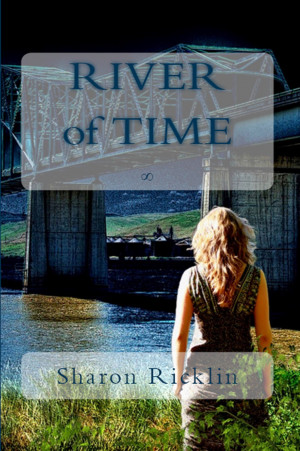 Unable to let go of the past, Maggie St.James' only desire is to "fix" her broken marriage. Confident she's found the way to travel through time, she makes a ridiculously dangerous plan. But will the benefits outweigh the risk? With every detail planned perfectly, she begins her journey. But there are two things she hadn't planned on: how to return to her own time... And meeting Logan Maddox. 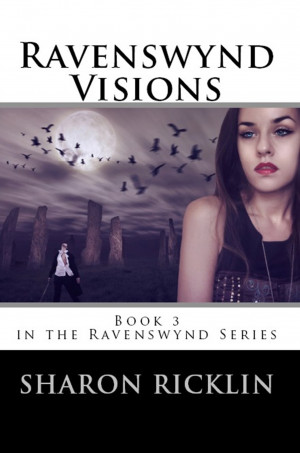 Ravenswynd Visions by Sharon Ricklin
Series: Ravenswynd, Book Three. Price: $2.99 USD. Words: 83,950. Language: English. Published: September 17, 2013. Categories: Fiction » Romance » Paranormal
A trip to the Hebrides brings a new prophecy. A disturbing, mystifying riddle - as usual...But as time passes, the prophecy is all but forgotten. Elizabeth begins to wonder if perhaps Sibelle was wrong... But she'd forgotten; Sibelle is never wrong. And sometimes evil returns when you least expect it. 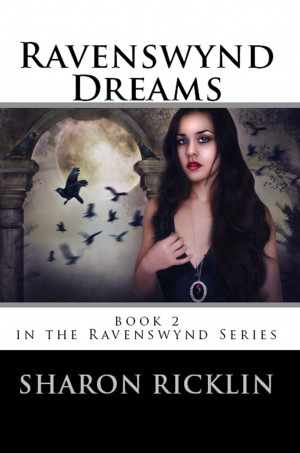 Ravenswynd Dreams by Sharon Ricklin
Series: Ravenswynd, Book Two. Price: $2.99 USD. Words: 85,230. Language: English. Published: June 9, 2013. Categories: Fiction » Romance » Paranormal
Elizabeth's first day as a vampire was definitely not what she'd expected, what with nearly losing her beloved twin sister. And after a warm welcome to Ravenswynd, her new home in England, it gets even worse. Her immortal life takes on a whole new twist and she finds herself living in a perpetual state of fear. There actually are fates worse than death, even when you're a vampire! 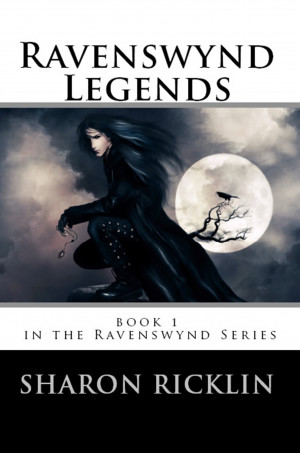 There's a legend...about a party...hosted by vampires. An event so exclusive - the invitation is by word of mouth - with strict rules that must-be-followed. So what happens when your best friend is invited and practically begs you to go along with her? You go, of course! Everyone's having fun...at first...