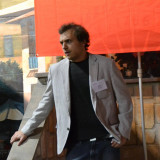 This interview has been viewed 132 times.

Published 2017-12-18.
When did you first start writing?
Since I was in grade school. I was a big dinosaur dork as a kid, and in 4th grade I wrote this story featuring all my classmates in a Jurassic Park-like setting. Thing was a lot of them got eaten and eventually someone complained to the teacher, and that put an end to that. Since then I've learned the value in creating my own characters.

I was almost coming up with stories though even before that--I'd act out these stories that were largely inspired by the stuff I watched. When I got a little older--late grade school and into high school--I actually wrote a lot of fan-fiction. Mainly on the Legend of Zelda. One I wrote got a great response from fans, and someone told me "I bet the next full-length story you finish you'll publish." I didn't really think much of it at the time. Going into college I didn't think "I want to be an author." But I would keep coming up with story ideas and writing little things, until finally, years later, I sat down and wrote 'Icons'. So I guess that person was right.
What's the story behind your latest book?
'Icons' is a contemporary fantasy/speculative sci-fi story that takes place in a world called Roslyn. Roslyn is an alternate reality that aesthetically is somewhat similar to our own world--except that the mind or soul is money, called cogs. Once a utopian society, Roslyn has fallen into hard times. Cogs are harder to come by, and the great corporations that vie for dominance in the country--called the machifare--are all failing to find the best path for people to lead happy lives, which in turn generates more cogs to keep the nation prosperous.

But the real threat comes from Roslyn's enemies: soul-stealing entities called Blood Poachers, who conjure sentient thunderstorms that ravage the world. To combat the Blood Poachers, the machifare deploy teams of metaphysical athletes called Durationists. Durationists can use cogs in extreme ways to manipulate mind and matter. For centuries, they have fought off the Blood Poacher menace. Duration is in many ways the engine of Roslyn's culture: as a sport, as a matter of national security, and a sort of science, because by finding ways to explore Duration, you find new ways to make cogs, and to keep the nation going to strong.

At the start of 'Icons One', Roslyn's major cities--a source of great wealth--have been safe for some time. When one evening the threat of at storm presents itself off the coast of Metro Reef City--a sprawling, New York-like metropolis--many scoff that the Blood Poachers could strike at the heart of the nation. Only one Durationist, a disgraced player named Lucas from Slag Falls, appreciates the danger. Having once walked away from the Durationist League due to his controversial ideas, Lucas has returned to try and save the Metro Reef--and Roslyn--before it is too late.

This is the first part in a five-part series. Originally 'Icons' was one giant novel--it probably would have easily exceeded 1000 pages--but for the sake of my own sanity it was split up into five acts. Each is a self-contained story, albeit more like a long episode of a TV show than what you might traditionally think of as a novel. This first story introduces the world, some of the main characters, and shows what a Durationist is and what their jobs are. It follows Lucas and his new team on a mission, while also setting up a larger plot going forward.
What motivated you to become an indie author?
Control. I always wanted complete control over what I was doing. I wanted to choose my own cover. I wanted to have total say over the direction of my book. And I wanted total autonomy in the publication process. I am not sure a story like 'Icons' would have survived the traditional route. Originally this was a very big book, 1000 pages. That would have been a hard sell to a publisher. Then I split it up into five-parts, and honestly each arc feels more like an episode of a TV show than what you normally conceive a novel as. Again, I don't know if that would have flown the traditional way. I think I would have been asked to change the story to make it work as a traditional novel, and I would have refused to do that. Going indie was my only choice.
Who are your favorite authors?
Growing up my favorite was Michael Chrichton, but I also read a lot of Star Wars Expanded Universe stuff, so I came to enjoy authors like Timothy Zahn, Michael Reaves, and James Luceno. In 6th grade our teacher read us Harry Potter every afternoon, and I came to love J.K. Rowling, both her style of writing and her success story. Later influences in high school and college included Tolkien, George R.R. Martin, Roger Zelazny, Robert Ludlum, and John Le Carre. I unabashedly like the big names with big series. It's like finding a great band with a huge back catalog.
How do you approach cover design?
For 'Icons' I wanted something that really stood out. With fantasy you see a lot of minimalist stuff, and while I can dig that, I thought I needed a cover that really showcased how dense and action-packed this world is. I wanted to take a specific scene and use it as a set piece. I found a great artist named Chris Puglise (https://www.instagram.com/cpuglise9/) who nailed what I was looking for.
What is your writing process?
I outline, usually pretty thoroughly, but I'm always open to where the story takes me. Sometimes a character or scene just demands something out of nowhere--often it's a thread I never considered but wraps things up really nicely. Those moments seem to be rewards for constantly hammering away. There's always a compromise between my schemes and what the story ends up demanding of me.
When you're not writing, how do you spend your time?
Reading. Golfing. Hiking.
What inspires you to get out of bed each day?
The prospect of making progress with work, even if it's just a few inches.
What is the greatest joy of writing for you?
Two things. One, when someone reads what you wrote and reacts the way you hoped they would, that to me is tremendously rewarding. One of the reasons I write is because I feel it's the only way I really express myself well. So when someone gets it, it's like you make a real connection with someone. Two, when you slave over a piece of writing, and it comes together, and you look over and see not only how your plan came to life, but also how glimmers of inspiration opened up during the writing process and helped everything come together in ways you never anticipated... that to me is like being in the crucible and coming out with something really special. Writing is a tough gig. There's a lot of blood, sweat and tears, and it's all worth it.
What are you working on next?
Icons Two!
Smashwords Interviews are created by the profiled author or publisher. 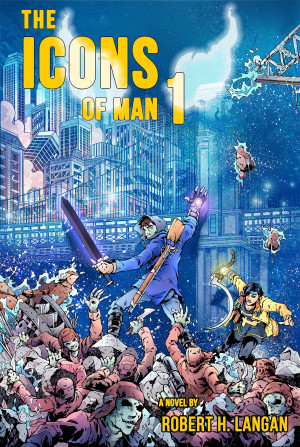 The Icons of Man: Book One by Robert H. Langan
You set the price! Words: 72,410. Language: English. Published: December 7, 2017. Categories: Fiction » Fantasy » Contemporary, Fiction » Young adult or teen » Science Fiction
A storm is coming, a city is burning, and the only thing standing between massive floods and a million deaths is an illegal team of transcendental athletes.